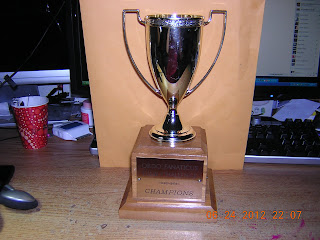 So  my team was 3 people, myself, Ogres and Skaven.  The Skaven player completely smashed face, getting close to max battle points. I didn't do bad either going 3-1-1 getting 73 out of a possible 100pts.  The Ogres ended up 3-1-1 as well.

My army was one of only 2 at the event (74 ppl) with max painting score, but the other one got more favorite army votes (he had a Cthulhu-based VC army) so I got second there.

I didn't take much video the first day, and 2nd day I forgot the camera. It's ok I really didn't want the added stress of filming. I just wanted to have fun.

Game 1: I fired the rock lobber at a unit of tomb guard. It scatters 10" directly over the middle of a sphynx, killing it outright
Game 2: I Lost the game entirely, but about 1400 victory points but got full bonus, so I ended up with more battle points then my opponent lol!
Game 3: Was really close from the start. This game we were fighting over a hill.  His first shot killed my troll, made the archers and all 3 war machines panic.  However after that the warmachines were golden. In the bottom of turn 6 a mangler and the warmachines completely cleared the hill, leaving only the mangler to claim it for bonus points. It was amazing.
Game 4: By far the closest and best game.  Key moment was when 2 units of Knight Errants charged my big'uns. One unit passed over a mangler, but made all but 2 saves. The other unit, however, charged over a river and lost 5 to dangerous terrain. The Black Orcs were wiff-tastic, being locked in with 5 knights for most of the game.  Oh, and lost the spider to Heroic killing blow lol!
Game 5: Amazing game. Gork came out and did a lot of stomping, killing 15 out of 18 Khorne warriors along with most of the marauders protecting the casters.   The moment of the tourny though was when my spearmen charged a kited-out Chaos Lord on chariot in the rear.  He killed 5, but I had ranks and charge and won by 1.  He then failed two LD8 panic tests, and then rolled 2-2-1 to flee, and the gobbos ran him down!  It was epic!

Things I learned:
-Foot Showshoe of Gork is the most amazing spell, ever.  There is no doubt I'm going to dual- level 4 casters in big games.
-My new strategy really works out. I move from having the big'uns ready to do all the damage, to having my NG horde and deep HW/Shield boys out front. with the BSB and general nearby they are both very, very resilient. I then use the chariots, big'us and spider to come up and actually kill things. I never got to use sneaky stabin' though or had many flank charges, but I didn't really need too either.
-Jury is still out on the chariots.  Really, these guys are interesting. People put more effort then I think it is worth killing them, as the usually don't do anything. But they are great for harassing, flanking,  and just generally being a pain.  I might go to goblin chariots due to the extra movement.
-I could probably use a Calvary unit, maybe replacing the chariots.  Speed is something I lack.

MVP:
by far the mvp's of the tournament were the warmachines, and specifically the doom divers. Holy crap these things are just amazing.  The doom divers are incredibly accurate, and just love to hit small units of heavily-armored troops.  Not great against mass infantry, but that is what the rock lobber is for.  Second place goes to the Orc Shaman and Foot of Gork.
LVP:
Aracknarok.  Only in 1 game did he do anything (harassing and finally running down a horde of marauders) the rest of the time he was not effective. Being only S5 he can't cut through heavy armor, and just in general isn't very killy or survivable.  Not too bad if you can use him as pure support, but there are much better support units you can get for 290pts.