Will only 4 days left I accomplished everything I had intended today. I completely finished the warboss and troll, and based the Black Orcs.  I airbrushed the bleached bone onto the boys and even dived into the first set of 5. I might just pull this off after all.. 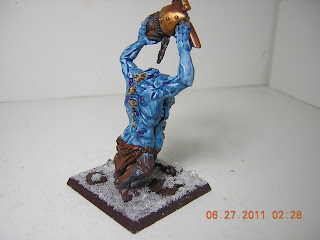 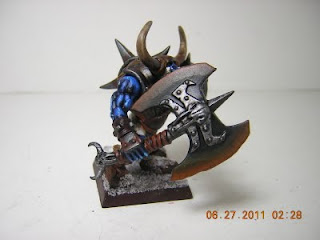 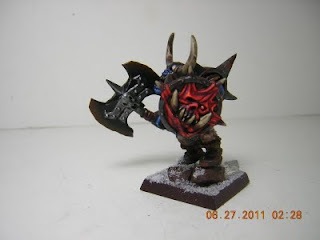 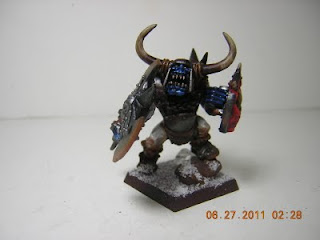 For the ogre blade I decided to just do a glow effect instead of lightning or the like. Many layers of very thin reds, red-orange and yellows built up to a nice effect. I was hoping it would brighter, but I'm still satisfied with the result.

I really like all the pigment used on the troll's legs, like he's been sloshing around in the mud.
Posted by Sorien at 2:35 AM No comments:

Too busy painting to update..

LOL I'm still fucking crazy.  Black Orcs are nearly done, and I have plans do to a lot of airbrushing and washing with the boys to make them go super quick. Plus I'm taking the last 3 days of the month off to paint them Damnit, I'm gonna finish.

Oh, ya, and I'm playing in a 2k 40k tournament on Saturday. I should be painting, but..

Anyway I got a new video camera. Not a great one, not even "new".  I picked up a RCA Small Wonder from a local pawn shop for $40. It takes really decent video for being only VGA.  It runs off 2 AA batteries (which I have lots of NiMh rechargeable already) and uses a MicroSD card. Check it out:

More to come!
Posted by Sorien at 4:50 PM No comments:

Finished my unit of goblins last night.  Oh boy this is a lot more work then I anticipated and I'm really not sure if I can finish.  We'll see... 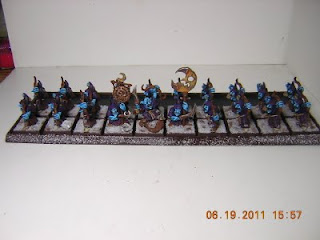 Posted by Sorien at 4:10 PM No comments:

Does anyone still think they can win in the assault phase?

I've been thinking a lot lately about 40k and the so-called "meta game".  If you had not noticed, the game has become dominated by the shooting phase.  When 5e first came out, there was a lot of talk about how deadly assaults were compared to 4e, even despite losing the sweep into a new assault.

The first big list of 5e was nob bikers. Capable of wiping an entire army in assault. And it worked. Nob bikers actually caused a shift in the meta game, a shift to more shooting.  Very few units, much less armies, can deal with Nob bikers in assault.  However a lot of armies can field a crap ton of S8 shooting, giving nobs a real big problem.  Also, it turns out, anything that is a threat to Nob bikers also does really well against vehicles.

Next in evolution, there was the mech IG lists often (if not frequently mistaken) called "leafblower" lists first made popular on BoLS.  The idea of the list was pretty simple, a whole lot of downrange firepower from many sources each of which isn't that crucial and has lots of redundancy.  They worked, and still work.  Melta vets in a chimera runs a wopping 155pts. Really?  Manticores, hydras, etc, all with the purpose of making you roll as many dice as possible.  However, IG really lacks any defense against CC, and if you can get there, you can win.

It wasn't long before a decent counter came out: Space Wolves.  Space wolves came and presented similar firepower with long fangs + razorbacks yet didn't fold like wet tissue in assault. If used as a primarily shooty army, with cc as  "mop-up" only, Space wolves are hard to beat to this day.

Even I have abandoned CC as a primary source of damage with what is probably the only pure CC army in 40k...Orks.  I've gone to a heavy, heavy shooty meta-denial list and play style. And it works. Fabulously!

Now we have Grey Knights which is on par with Wolves in shooting (if shorter range) and even better at the CC mop-up due to the all power weapons thing.  GK continue to excel not as an assault army, but again primarily shooting with enough CC ability.

What can we conclude from all this? The current state of 40k is simple. Games are won or lost in the shooting phase.  Roll better on the vehicle damage table, you are likely going to win more often then not.  Does not matter on the rest of the rolls, just the ones on the damage table.  For example, just tonight my cousin was playing Deathwing vs DE.  He lost, not because he played bad or shot bad, but simply could not roll enough wrecked/explode results on the DE vehicles. They were stunned a lot..but who cares (especially since it was annihilation).

I'm not saying that you can't take out vehicles in assault, in fact I depend on being able to do so.  What I am saying is that you can't win a game just from assaulting things.  You have to be able to shoot at least as well as you assault..and vice-versa.

What does this mean for 6th? That somehow the shooting phase needs to be toned down, while at the same time making it easier to take out vehicles with average rolling.  In other words, fewer rolls on the damage table, but taking a vehicle out of the game more often per roll.
Posted by Sorien at 3:38 AM No comments: 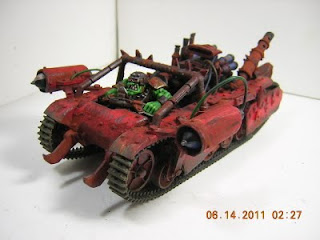 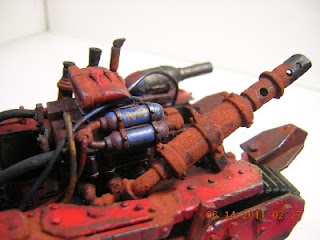 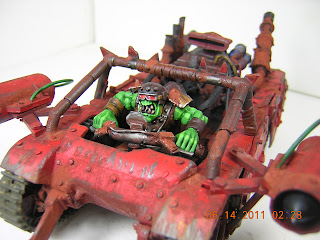 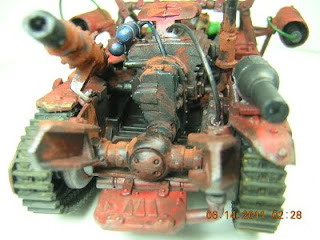 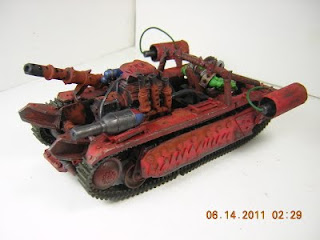 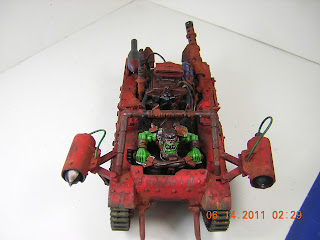 Posted by Sorien at 2:37 AM No comments: 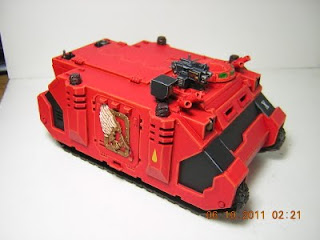 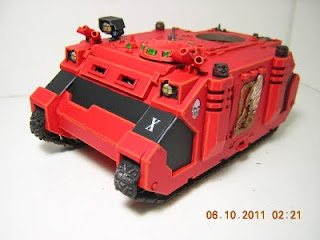 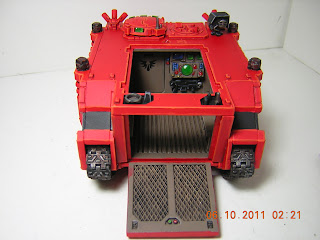 I've had this lingering for over 6 months! Finally done!  I only have a stormraven left to paint for my Blood Angels and that's been moved to a back burner now.  After OFCC.
Posted by Sorien at 4:52 AM No comments: 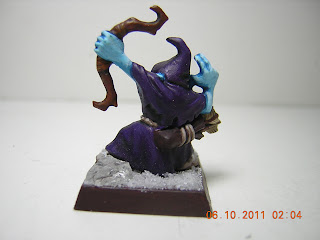 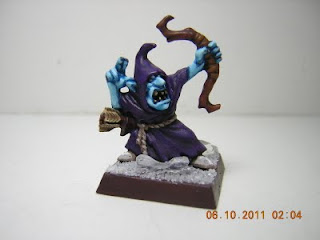 So I finished the first night goblin.   So far I'm really happy.  The cloak is the best part as far as I'm concerned.  The skin is the right color, but I need a lot more practice with it.  The rest of the details are done pretty basically (bow, quiver). The base especially turned out exactly like I wanted.  Once the cloak and skin are done, the rest of the model is quite fast. Even the glazing used on the cloak is a pretty quick process.  Should not have any trouble finishing the unit in a reasonable time.
Posted by Sorien at 3:26 AM No comments:

July 23rd will be my first Apoc game. Taking Orks of course, using as many toys as I can.  I was limited to 5k, and had to back off and redo my list when I realized I was over 6k..this is what I'm bringing:

Sqiggoth
Posted by Sorien at 2:13 AM No comments:

More changes to the Blood Angels..

I'm really starting to enjoy playing the MSU style lists.  When something dies, it's not as important anymore unlike losing a stormraven with all it's now footslogging passengers.  I played the mephiston list last week and he ended up doing well, but some of that was luck (avoiding an instant-death wound from the archon).  He is a huge point sink which I'm not sure I need.  I'd rather have more stuff I think.  So my latest iteration:


HQ: Captain, jump pack, dual lightning claws, meltabombs
HQ: Librarian, (shield and unleash rage)
Troops: 10 Assault Marines, 2x melta, fist
Troops (x2): 5 Assault Marines, power weapon, metla; Razorback, searchlight, Las-Plas
Troop: 5 Assault Marines, power weapon, Melta; Razorback, searchlight (might do HF if I can convert one up).
Troop: 6 Death company, 1 power weapon, Rhino
Elite: 2 Sanguinary High Priests, one with jump pack, both with power weapons
Fast (x2): Baal; Heavy bolters
Fast: 2 Attack Bikes, MM
Heavy: Predator; LC sponsoons, searchlight
Heavy: Devastators; 4x ML
If I had the money I might go full-on MSU: 6 MSU las-plas squads, 3 dev squads with las-plas with libby and a priest that comes to roughly 1900pts leaving me some wiggle room. Can BA do MSU better then SW? No, but they can do it differently enough that they don't play the same. Grey Hunters are better then assault marines, but I can get FNP & FC. FNP devastators (especially if fearless) isn't something to discount either. Basically the SW version is better, but BA can be more survivable.
Posted by Sorien at 8:58 AM No comments: 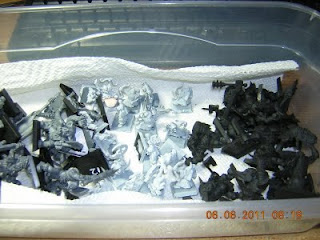 Making good progress.  Everything is assembled. Black Orcs and goblins are primed.  Boys are washed ready for primer.

Waiting for primer to cure, continued on the Razorback. All that is left there is the final highlighting and some detail on the storm bolter.

Also worked on the buggy driver. He does not have much left. Bought some Vallejo Model Air gunmetal metallic. Going to try the hairspray thing again, but with more contrast.
Posted by Sorien at 8:17 AM No comments:

Black Orcs assembled.  They were a royal pain to rank up. Going to dive into boys soon, and work on some painting tomorrow. 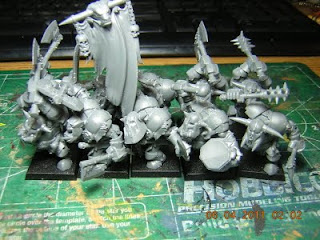 Posted by Sorien at 2:11 AM No comments:

Assembled warboss. Used great weapon head on the hand weapon handle to create the Ogre Blade.  Cleaned up and based the night goblins.  The champ and warboss are going to get some basing work. 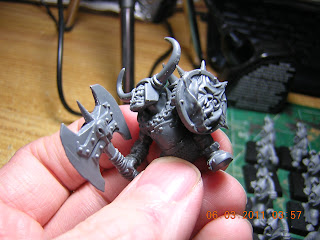 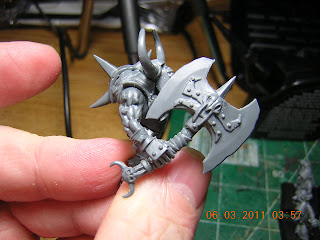 Posted by Sorien at 3:55 AM No comments:

OK I'm completely freaking nuts.  Building, painting a 500 pt army in 30 days. I'm not talking a table-top quality army either. I want my O&G army to really, really shine.  I almost didn't throw my hat in, but I'm just crazy enough to try it. I honestly don't think I'll get everything done.

..only because of how little damage my opponent could do for 3 turns.

Pretty basic mission, killpoints and pitched battle. I honestly spent like 10 minutes at first trying to figure out a deployment and movement strategy. I think I really hate playing against Dark Eldar mainly because I don't know how to play against Dark Eldar.

I'm still liking my shooty list a whole lot more then the Terminator/Stormraven style I had before.  I am thinking about dropping Mephiston for a regular Librarian and more bodies. I could add another assault squad in a razorback (with heavy bolters) or more Death Company or another attack bike (I'd have to paint it though). There are a lot of things I could add with 150pts.

Oh and a treat from the game next to me..another Blood Angels vs Dark Eldar slaughterfest: 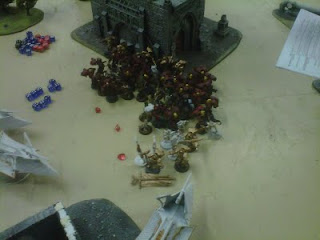 Talk about a mess!
Posted by Sorien at 2:16 AM No comments: