As my interest in painting the Death Company wanes, I did finish the power sword arm for my jump pack priest and got the base color on the vendetta. The power sword and really cool shoulder pad from the DC box really makes it obvious he is a Sanguinary High Priest, not just a red apothecary. Now that's done, the rest won't take long. I was out of dulcoat so I used Krylon flat clear. Nothing wrong with it, except it takes a very long time to cure..at least a day.

I also got a Blackberry Curve. Never really wanted or thought I would use a smartphone, and I still don't see me using a fraction of the features. But I do like having all my email in one place.

OFCC is really close now, 3 weeks. Getting crunch time and I will have to really drive myself to finish the Death Company. And I should still put a frame on my display board.

Oh, and I got my magnets so my infantry will all be stuck down. Yay. Let's hope the washers hold lol.

Lastly, my next Ork project is in the works: forge world nob bikers. I had totally forgotten they were in the stuff I got in January, lol. I was thinking I would just have 3 plastic bikers to do but nope, I have these bad boys to paint. With OFCC stuff though, I'll be shooting for silver not gold for August. Maybe I can get the 3 color minimum and call it good.

Terrain is another miss for July, that's two months in a row I missed. August should catch me up though, after OFCC that is. 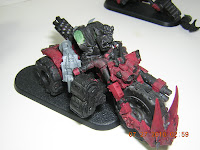 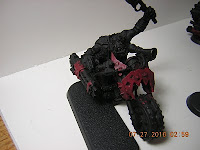 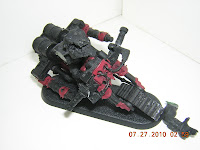 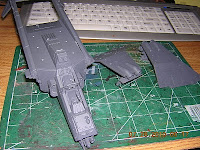 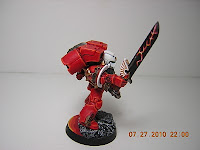 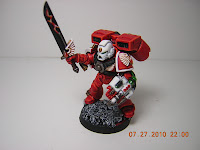 I didn't realize it had been 9 days between posts. That wasn't my intention when starting the blog, I wanted more frequent updates out there not fewer!

It's not like I haven't been doing anything, quite the opposite.

Phew! And it's not over yet..still need to paint the Death Company, evaluate and submit my team's OFCC lists, and finish the Vendetta. 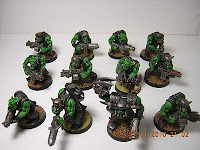 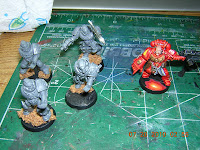 Posted by Sorien at 2:44 AM No comments:

I think I'm getting the hang of it.. 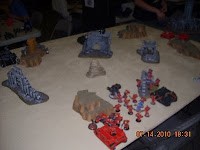 Another great game this week, and again I thought I played pretty darn good again. This time it was pitched battle and 2 objectives. I parked my lascannon tac squad on my objective, and sent most of my army after his after I realized it had only minimal protection. The idea was to kill troops, clear his objective and relinquish mine.

It worked. A bit of luck helped, like making 4 out of 5 5+ SoS cover saves in the first turn. But after that it was pretty much average rolling. I was able to whittle down Mephiston but he still took out my Devastators, my tac squad and absorbed a bunch of fire. However in the end my hood canceled his unleash rage followed by 4 2's on the to-hit roll and my power fist finished him off. I still ended up losing a lot on that side.

The other side was another story, with my assault squad absolutely crushing his as I was able to do all the assaulting giving me FC all the time. Combined with fire from both Baals and the furioso I was able to remove the token force left behind. The Death company didn't do much damage but kept his red-thirsted devastators from doing much either.

Overall I think I've learned a lot in just the last 3 weeks about how to play my Blood Angels. I've also learned scouting up Baal preds within striking distance of Melta-vet vendettas is not a great idea...
Posted by Sorien at 2:34 AM No comments:

Wow what a game. I honestly didn't hold out much hope for myself at the start. My drop pod dred only was able to pull off an immobilized chimera before being blown up by a banewolf. Both baal preds were immobilized despite night fight and smoke. However, they were not destroyed. between a full salvo from 2 hydras and a bunch of plasma I lost most of my jump pack squad.

Then it all turned around.

In one turn I opened 3 chimeras, killing more then half the contents in explosions. One was done in by a heavy bolter from the side of a Baal...

The key to this, IMO was both spending the points to kit out my Sanguinary priests with infernus pistols and power weapons, and the decision to split them off from their squads to kill more things at one time. Yes, this left me in a position to have the priests picked out in shooting, which is exactly what happened, but my gamble paid off..I wiped out all the troops before losing the priests. Combined with no transports remaining to push for my objective gave me a good shot.

Having my drop pod furioso come down, take the weapon off one manticore followed by surviving plasma and then blowing up the 2nd manticore was huge. Then the blood talons wiped out an infantry squad before it got tied up by the armored sentinel. But again, by the time it happened, it was too late. Again, the investment in the Magna-grappled turned out to be a good one as it gave me 2 S8 shots against the AV10 side of the artillery.

Overall I think I played this game very well. Going against mech and non-assault armies is pretty easy for the Blood Angels. It's only dedicated assault hordes I foresee any real problems.

I would love to play against myself with my Orks LOL.
Posted by Sorien at 3:06 PM No comments:

Blood Angels, not that great at assault..? 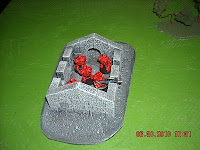 Ohhh boy, what an interesting game. I chock it up to a learning experience, and the lesson I was taught is that Blood Angels are not the crazy assault army like I've been playing them. It wasn't just this game, but also the earlier game against Tyranids. Both times I simply tried to out-assault my opponent with really bad results.

Even with furious charge against something as bad as a tervigon (with 2 power weapons and a fist) I need to be careful. Against those demons all with I6 and rending, and more attacks then a C130U spooky I just didn't have a chance.

Going forward I need to better understand when to assault. With Orks, it's easy. Run forward and hit them in the face, and see what's left after the dice stop moving. No matter what you take on, sheer volume of saves will bring down all..with T6 or less that is.

Both of these games I got clobbered I need to spend more time moving and shooting instead of barreling ahead full bore and seeing what happens. Even against fleeting units, I still have at least the same speed able to move 12" and fire. Bringing down 1 or 2 units before getting in assault would have changed everything in that game. Against 'nid MC's it's the same..light them up with the Baals, finish off with melta/infernus fire.

I still have a lot to learn about being really effective with my Blood Angels.
Posted by Sorien at 2:23 AM 1 comment: