Over the weekend was Storm of Silence 4, a major ITC tournament I was actually able to attend. I took my Superfriends 3.0 list and learned something very important.

I went 3-2, losing to ...wait for it..Eldar and Tau.  There wasn't much I could do against the Tau list but I could have beat the Eldar if I had played the aggressive CC game I should be playing.

The Wulfen only made it into close combat once out of 5 games. The other 4 they were shot of the board before they could do anything. Most of the time it took literally all of my opponents shooting to accomplish this.  The answer to this is a second unit of them!   I was thinking about dropping the Ravenwing entirely for a Librarius Conclave, but I might not need too.

So here is Superfriends 3.5:

Only one caster does not mean I'll get what I need, but it can't hurt to try.  Having the 2nd unit of Wulfen also come down turn 1 means a lot of hurt right where I need it the most. In both the games I lost if I had the 2nd unit, I would probably have tabled my opponent.

It's also a lot less money then my 4.0 list, and I'd rather put cash into modifying my Blood Angels into an Iron Hand Medusa Strike Force.
Posted by Sorien at 8:08 PM No comments:

Well the release of Angels of Death, and more specifically the psychic powers, has me reconsidering my list yet again.

Right now my list has a few decent threats, several fast units that can move around the table as needed. I do like how it plays even if it has not been all that successful so far.

My new idea is to instead concentrate on the Thunderwolf Star by adding a Librarious Conclave.  Sure there is invisibility but I'd rather get the +1T and/or the re-roll to saves.

This would also give me not 1 but 2 units of Wulfen in drop pods to provide additional threats.

So here is what I'm thinking about:

Librarious Conclave (Codex: Space Marines)
Chapter Tactics: White Scars
WS tactics restores the hit & run and skilled rider to the unit that I lose by taking out the Ravenwing.

This is a lot closer to the "netlists" out there, but you know people play those lists for a reason lol. That gives me a unit of 8 thunderwolves, 2 wolves for extra wounds and 4 bikes. Then both units of Wulen drop turn one so perhaps the death star may not take as much shooting .

Now I just need the cash...I would need a box of thunderwolves, wulfen, drop pod, iron priest, wolves, and a box of SM bikes.  Ouch.
Posted by Sorien at 6:37 PM No comments:

They are finally all done.  Such a pain to paint, not tedious like other stuff, just annoying.

If there is a next time they will be done with the backpacks and heads separate, and maybe the arms too.

Anyway all painted, based, including all the magnetized bits. 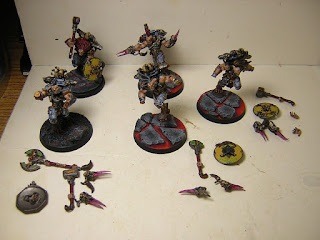 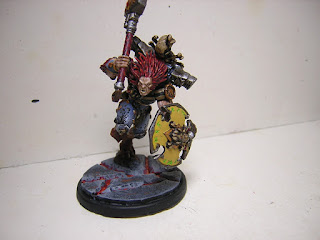 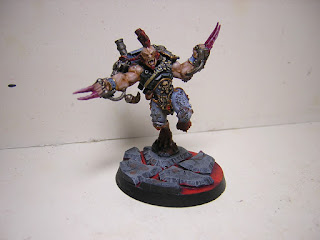 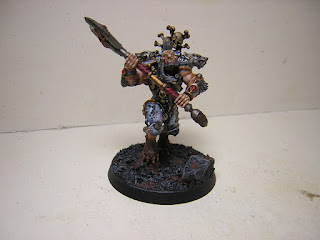 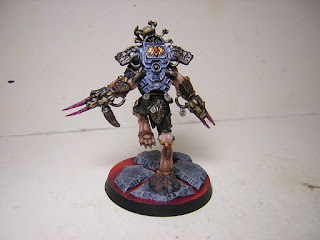 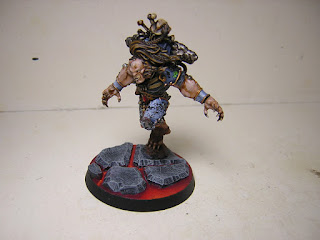 These guys are still completely bad-ass in game, that's for sure. Just being able to attack even if slain at a higher initiative makes the TH/SS almost a no-brainer.  But then the Frost Claws are just insane as well.

I've now completed the big projects I had to do before Storm of Silence.

What's next?  Not sure. I broke out my Helldrake so it can go along with the Air Armada. No hurry though.
Posted by Sorien at 8:06 PM No comments:

So far, I've just about finished.  Ya, surprised me too!

I have finished the Wolf Scouts and made good progress of the Wulfen. I have to say I hate painting these guys already assembled.  If there is a next time they will be done in pieces, for sure. 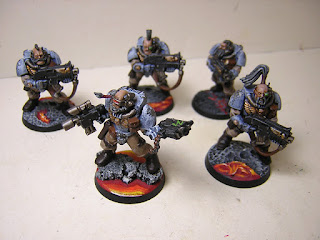 Not very exciting models, that's for sure.  Used the scout heads from the Space Wolves box and the usual battle damage, plus the bases were recycled from re-basing some of my Blood Angels.  They were done in a day.  No complaints!

Anyway quick update, much more painting to do!