The time is finally here!

Yep, after 7 months of working on game night, I finally was able to change my schedule so I have Wednesdays open again.

That means a whole lot more battle reports are coming, and will be almost exclusively Orks

I will be trying out different things over time, as I get used to playing the new book.

I will be concentrating my hobby time on building up my summoned deamons, and figuring out some Chaos Space Marines to use as an allied detachment.

I can't wait to get back in the grove of a regular 40k game.  I've been spending so much time and money on Star Trek Attack Wing that I've gotten use to it.

Also, Space Wolves are coming very soon. I do have some of them, which was always meant to be a small allied force for my Tau.  That idea is out the window for the most part, but at least I can still ally with my much-forgotten Blood Angels.

So anyway, look forward to more and more batreps soon, and what I learn from them.

Oh, and WS5 FNP 'ard boys are still FREAKING SWEET!
Posted by Sorien at 3:48 AM No comments:

Finished the next commission project.

The shoulder pads were a lot harder to do then I thought they would be. I ended up completely redoing them once. No, I didn't take any pictures of the failure...but let's just say they looked more like Bart Simpson then fire.

The power axes were wet blended from white to black and I think came out very nice.

The flames are all hand-painted. I painted the fender bone, then glazed it with the yellow. For the orange I used red glaze. 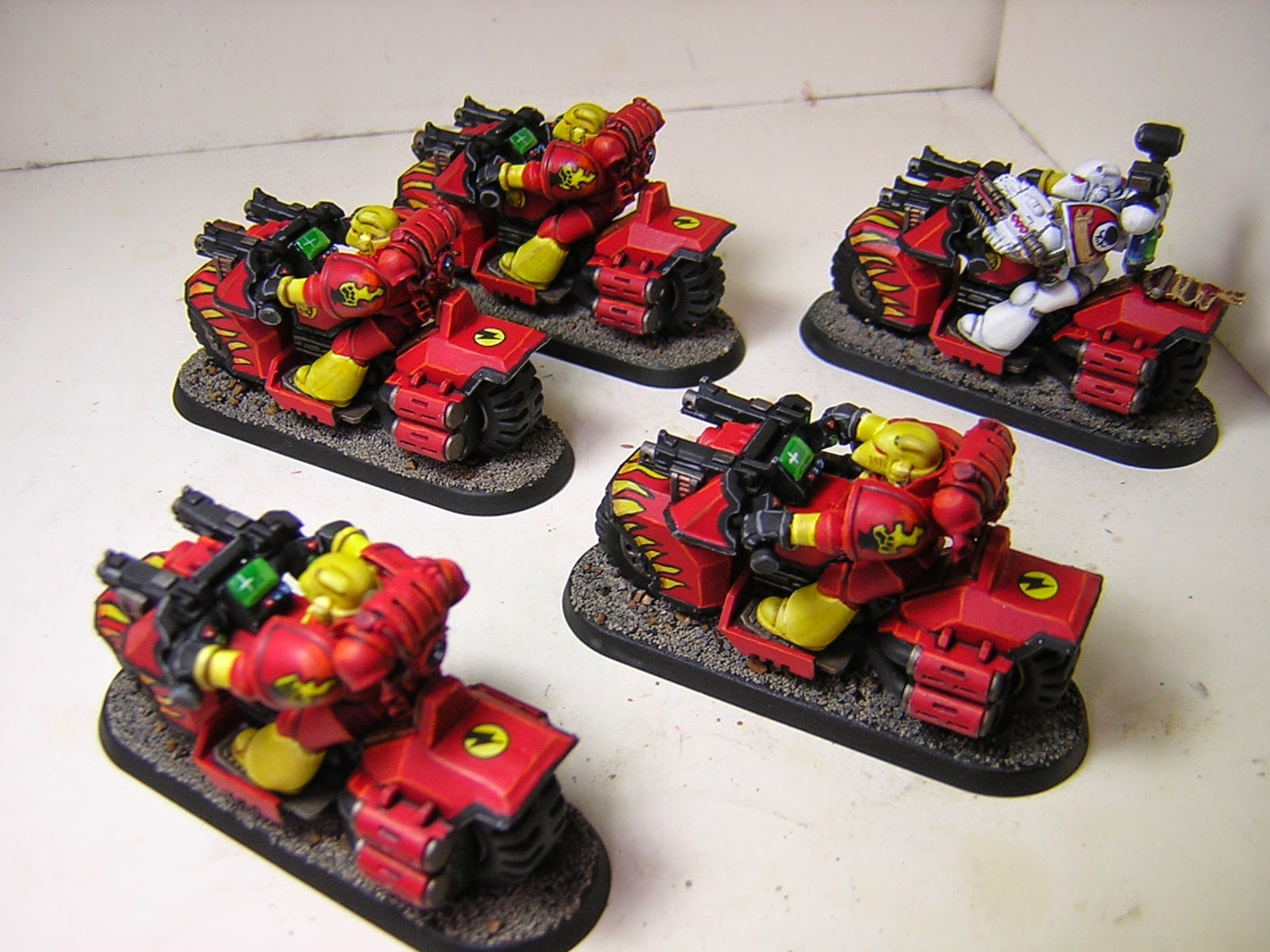 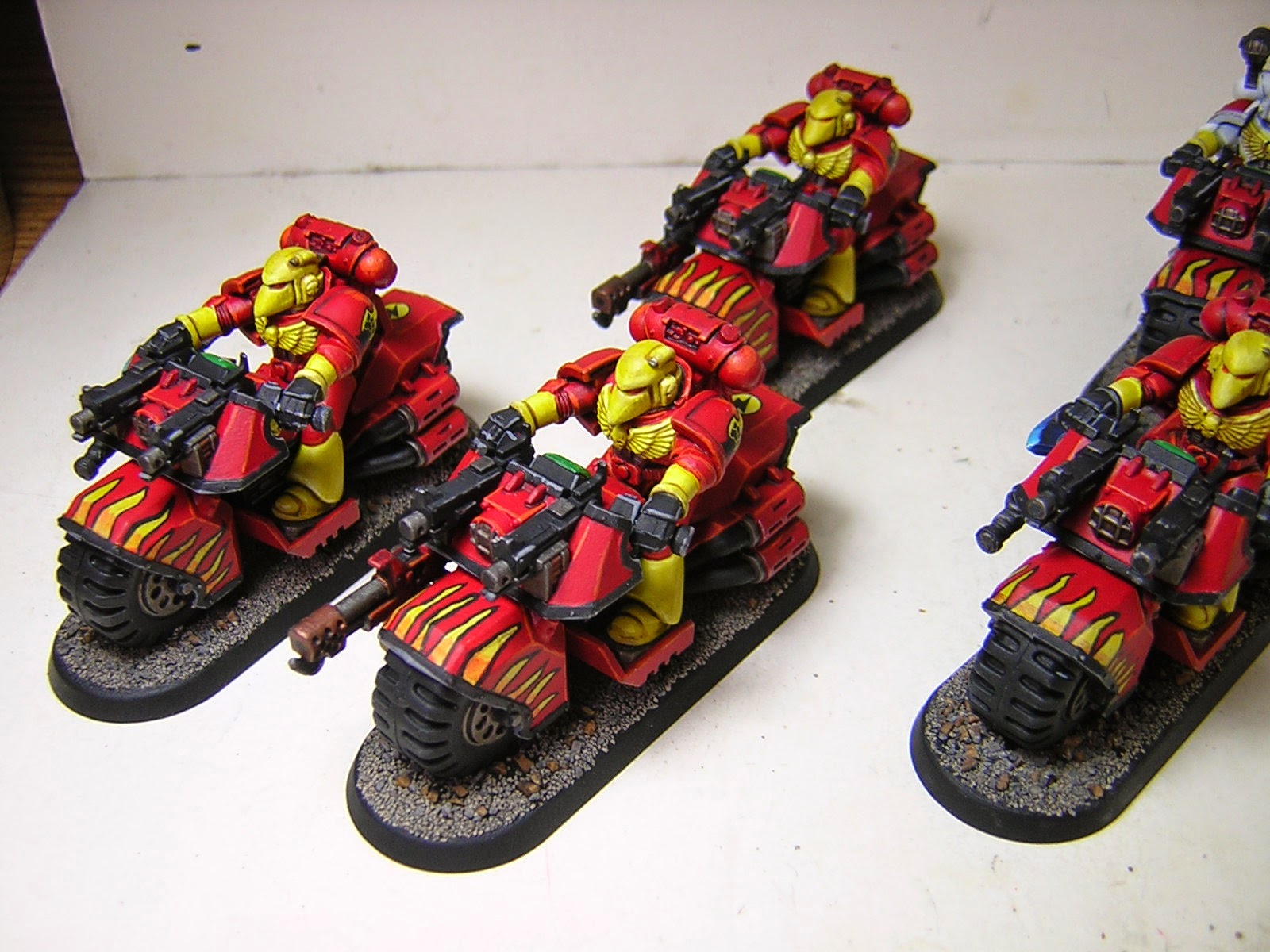 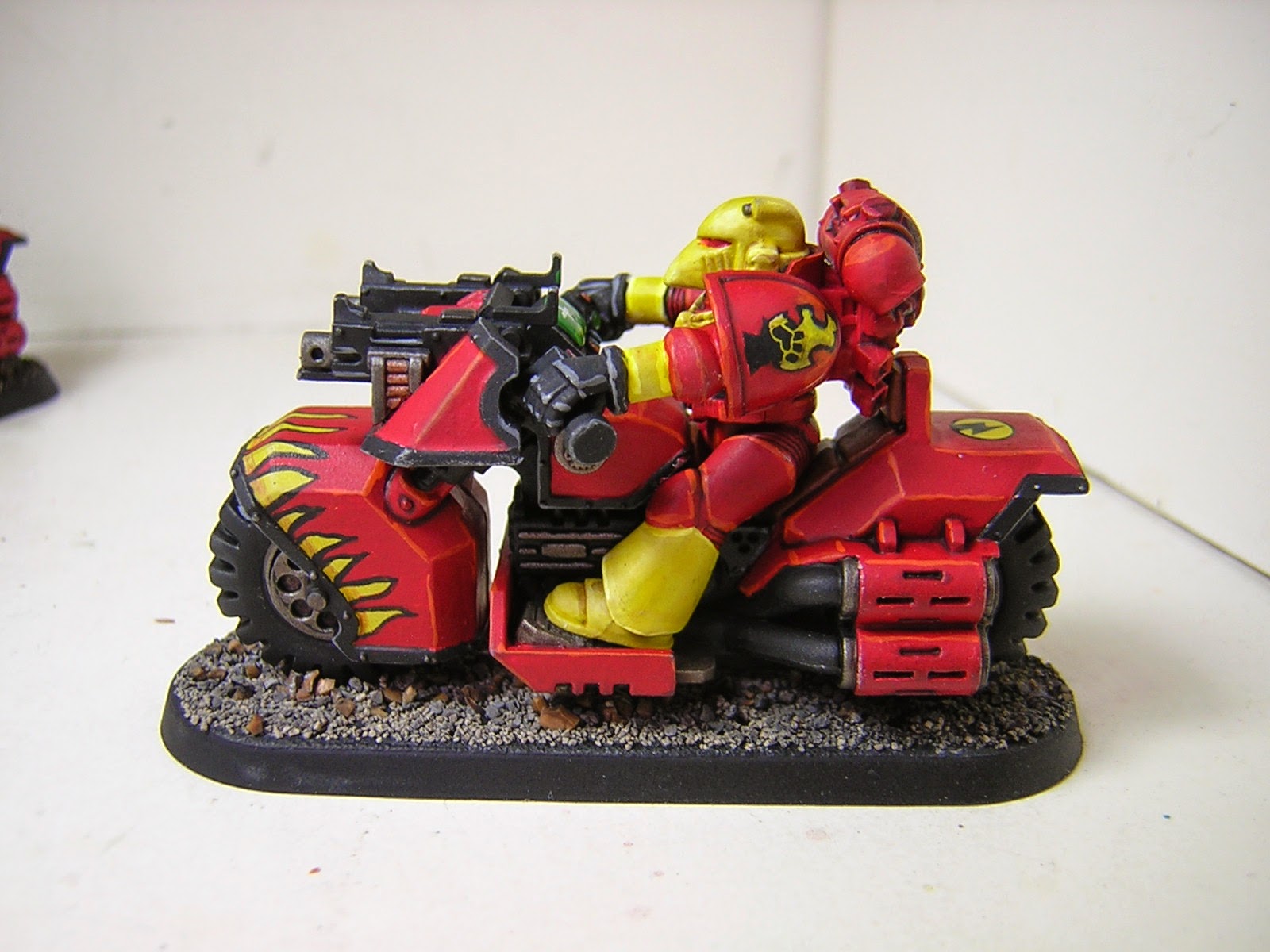 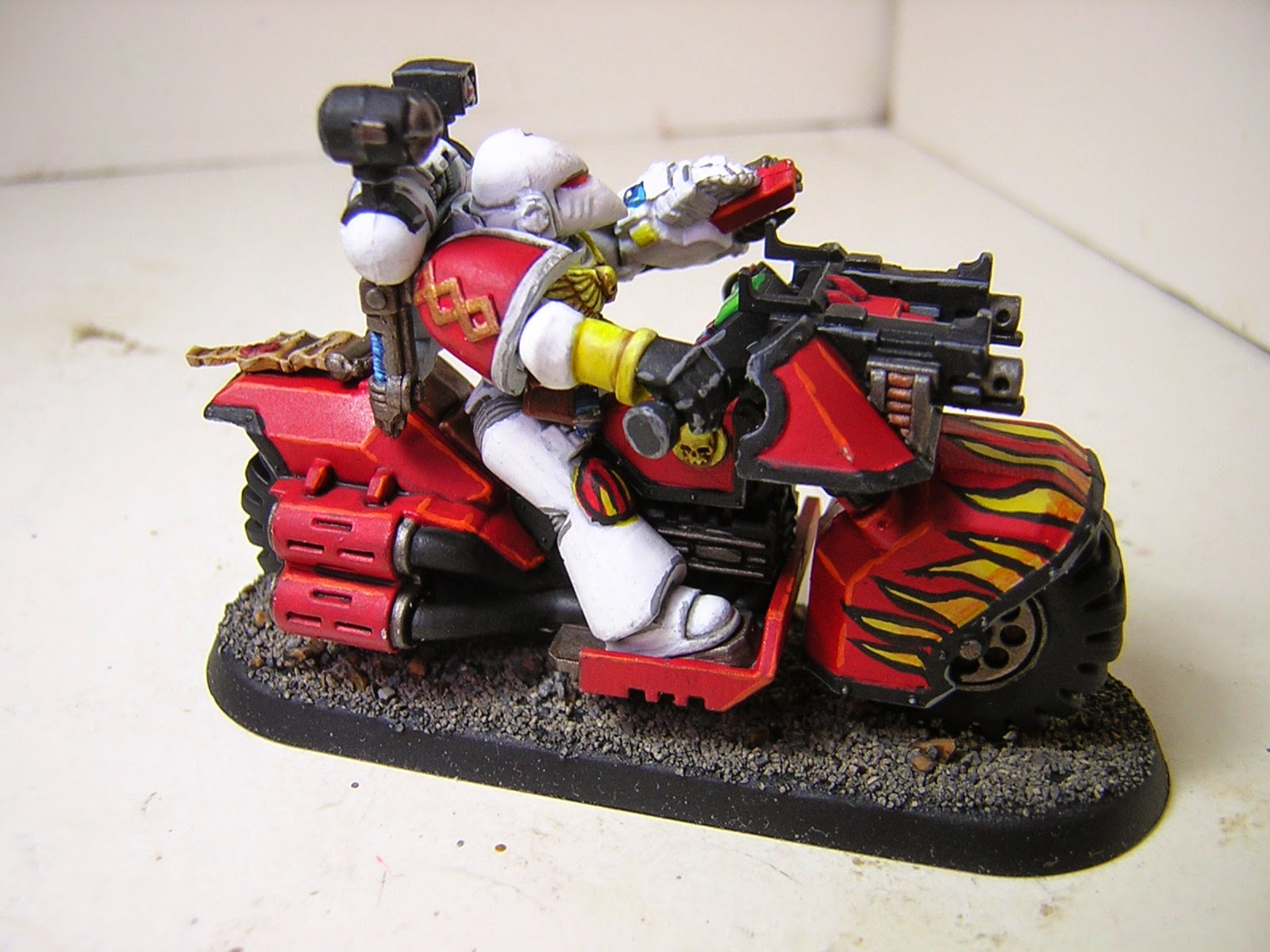 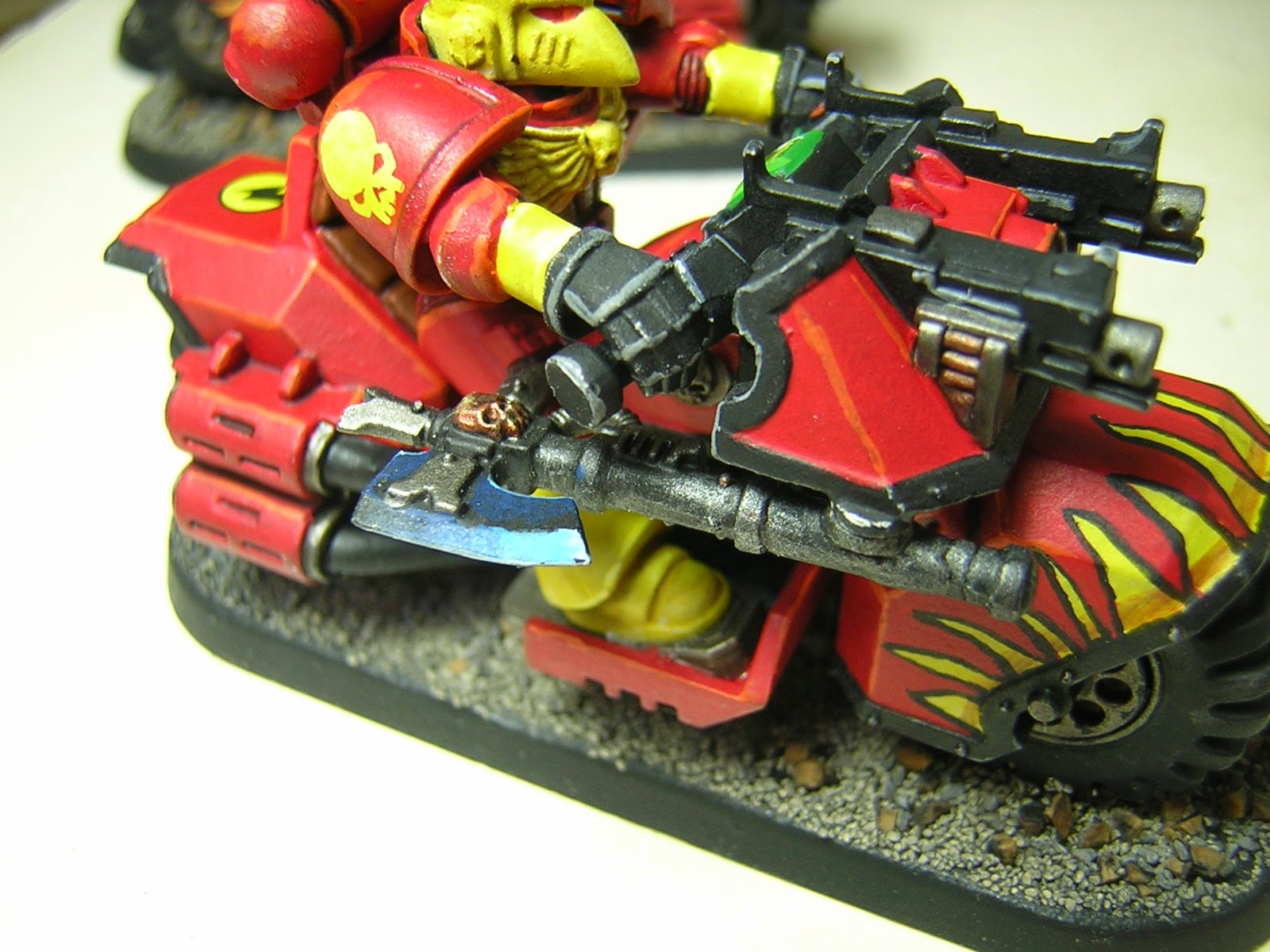 Been steadily working on these guys, going a lot faster then I had anticipated.  They are actually very close to being done.

I think they are a bit dark actually, but they will look great in contrast with the bright yellow of the Imperial Fists I've done. 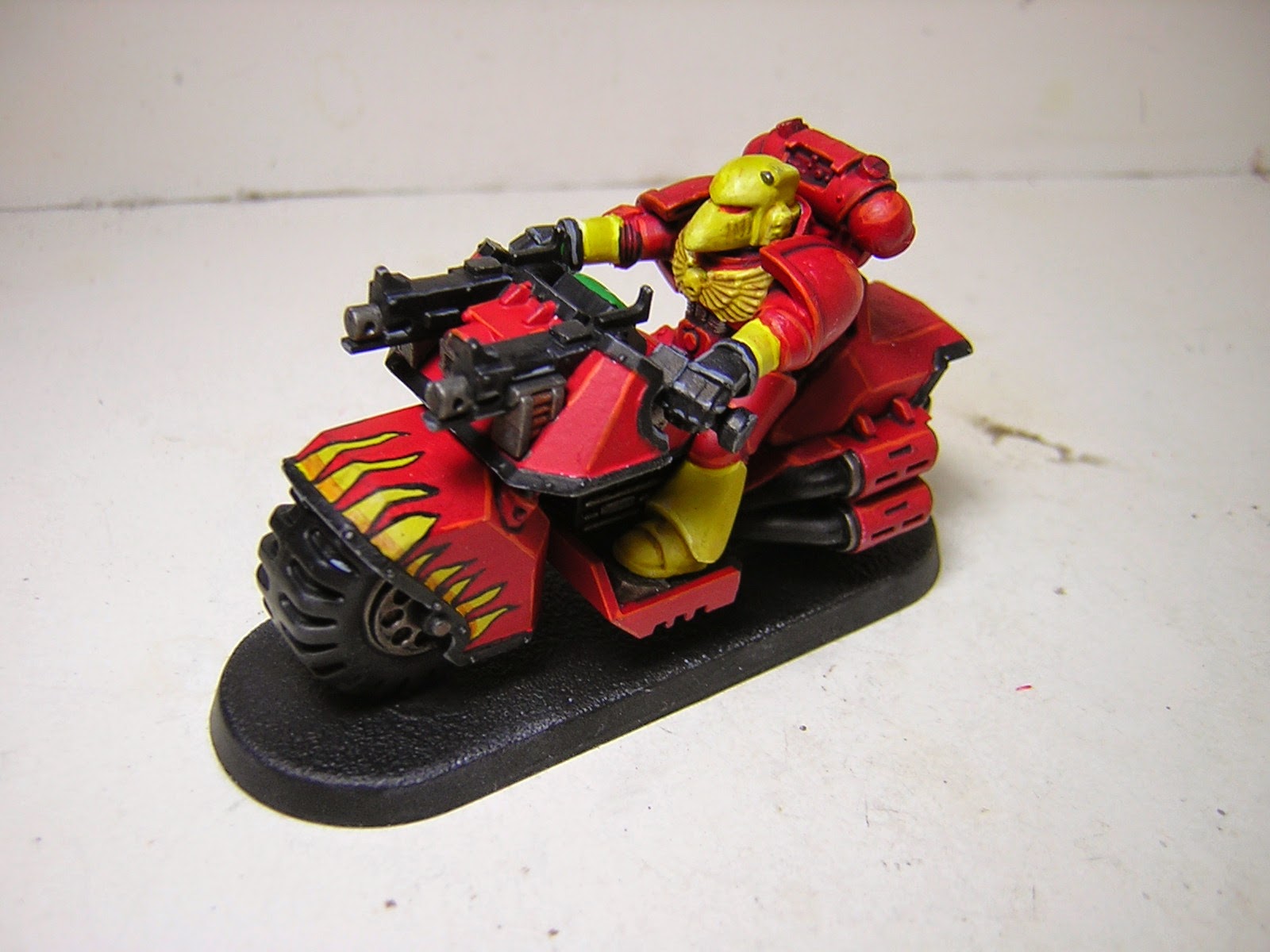 off to bed, and as always more to come.
Posted by Sorien at 4:42 AM No comments:

The friend that I've been painting Imperial Fists bikes and Stormtalons for is also running an allied command squad. Nothing unusual with that, in fact it's really good.   But he wanted a different chapter and decided on Fire Lords.  However after much searching, it looks like no one has ever put Fire Lords on bikes, so I had to come up with something of my own.

I wanted a bit of yellow on the bikes but didn't think doing a particular section of the armor would look right.  So I decided on flames. I'm waiting to hear back just to make sure the owner is ok with it before I continue.

But even if he isn't happy with it, I really am! lol. 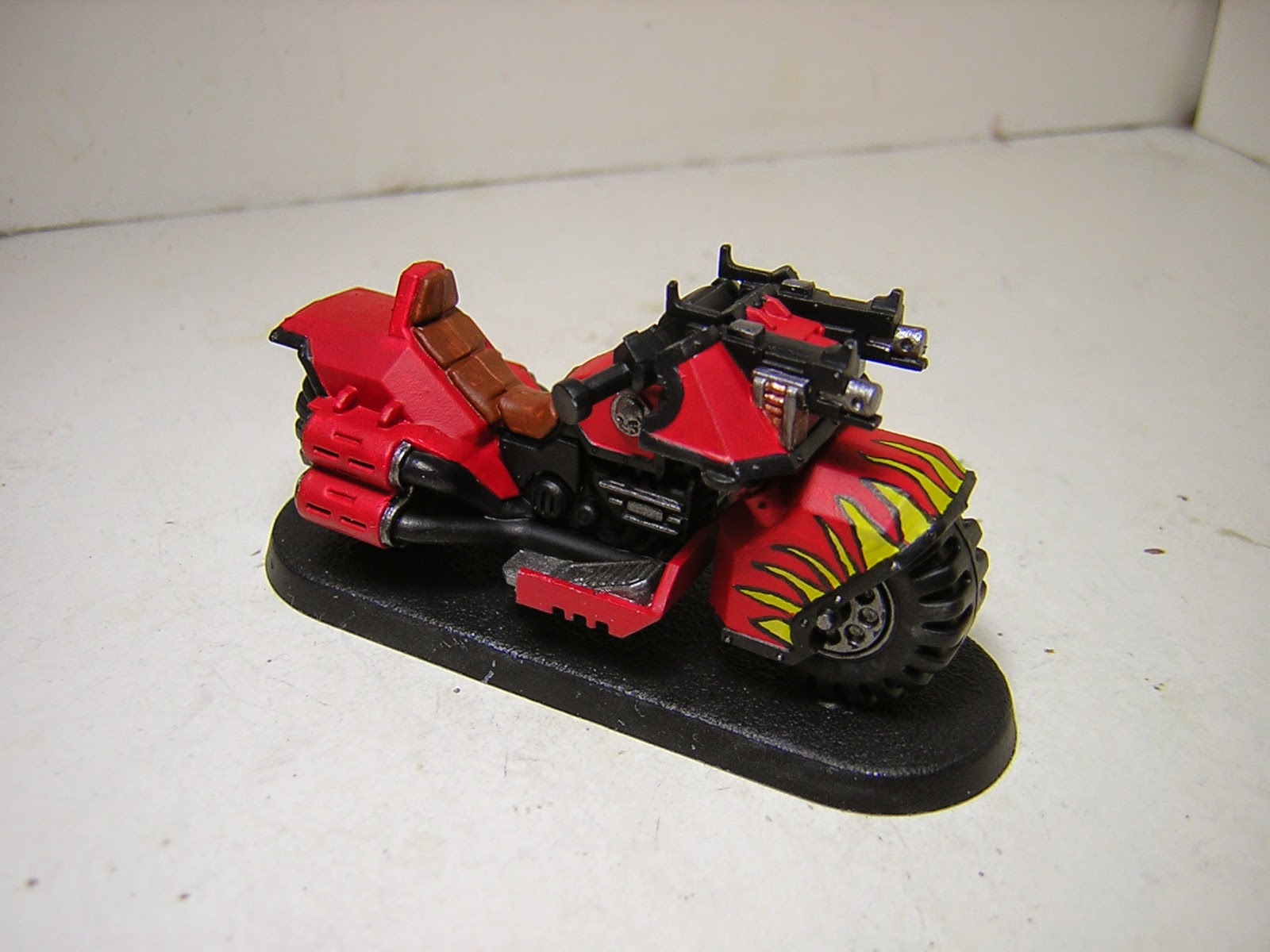 I also finished a test model for my deamonettes, but I'm not entirely happy with it. The skin turned out a bit too purple in places, but that is just doing a better job. The rest of them will be more grey and less purple.  But the amount of green is just what I wanted. 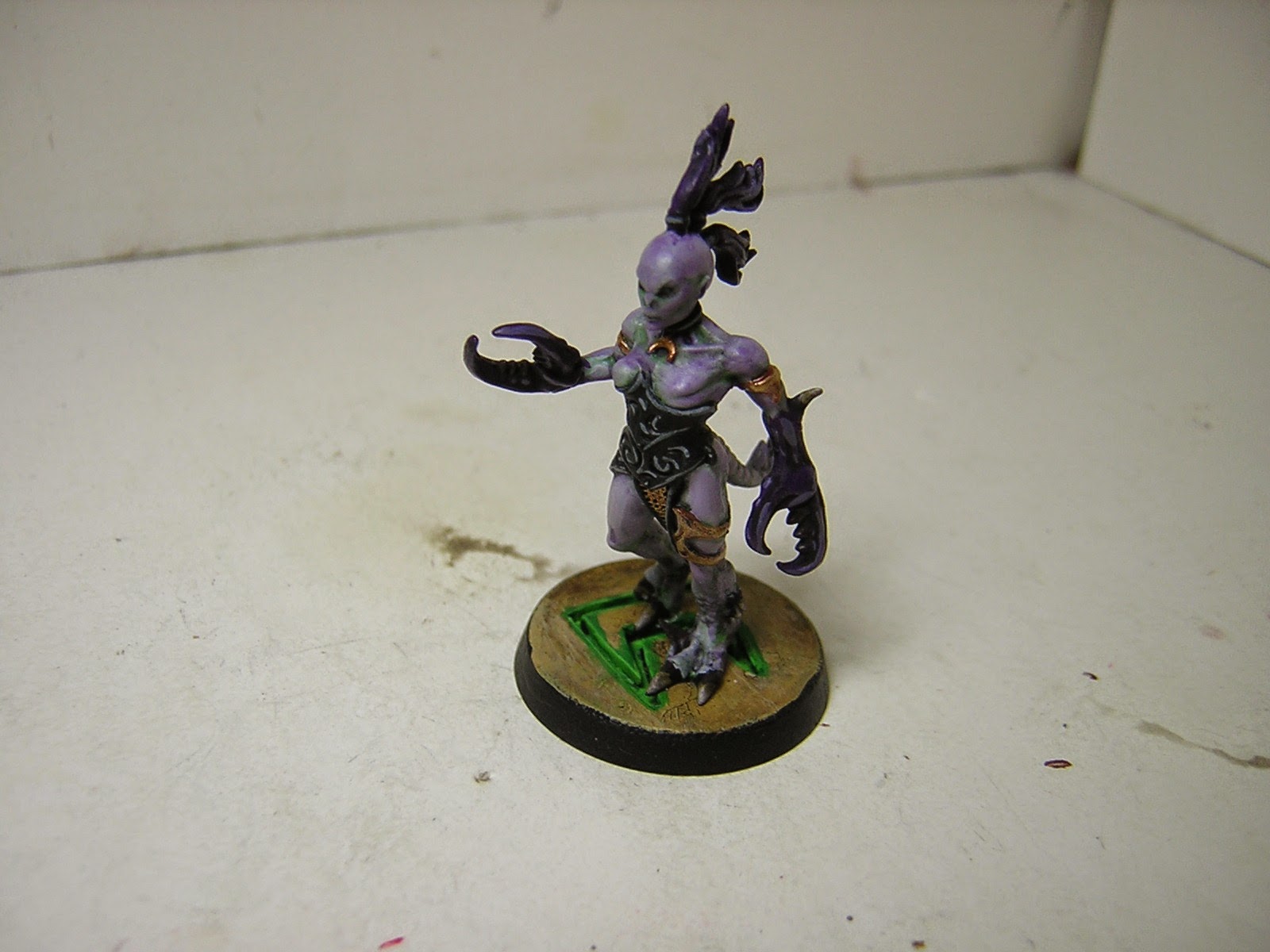 The glowing Ork glyph beneath her feet was an idea from a youtube comment, and I think it's going to add a lot to the models.  I just need to work on the glow effect.

Anyway I have lots to keep me busy, that's for sure.  I will be primarily working on the bikes, but the deamonettes won't take very long.  Then probably the Mek Guns are next.

Posted by Sorien at 4:32 AM No comments:

Just a quick update on my current project: My 2nd wierdboy. Built out of a Black Reach nob with some green stuff work and a big stabba from the Savage Orc box.  I decided to add some excitement with floating rocks and even a floating Grot on the base.

Then I finished it off with some OSL from the yellow eye and the vortex-like ball of psychic energy starting to form in his hand.  I think it turned out pretty good. 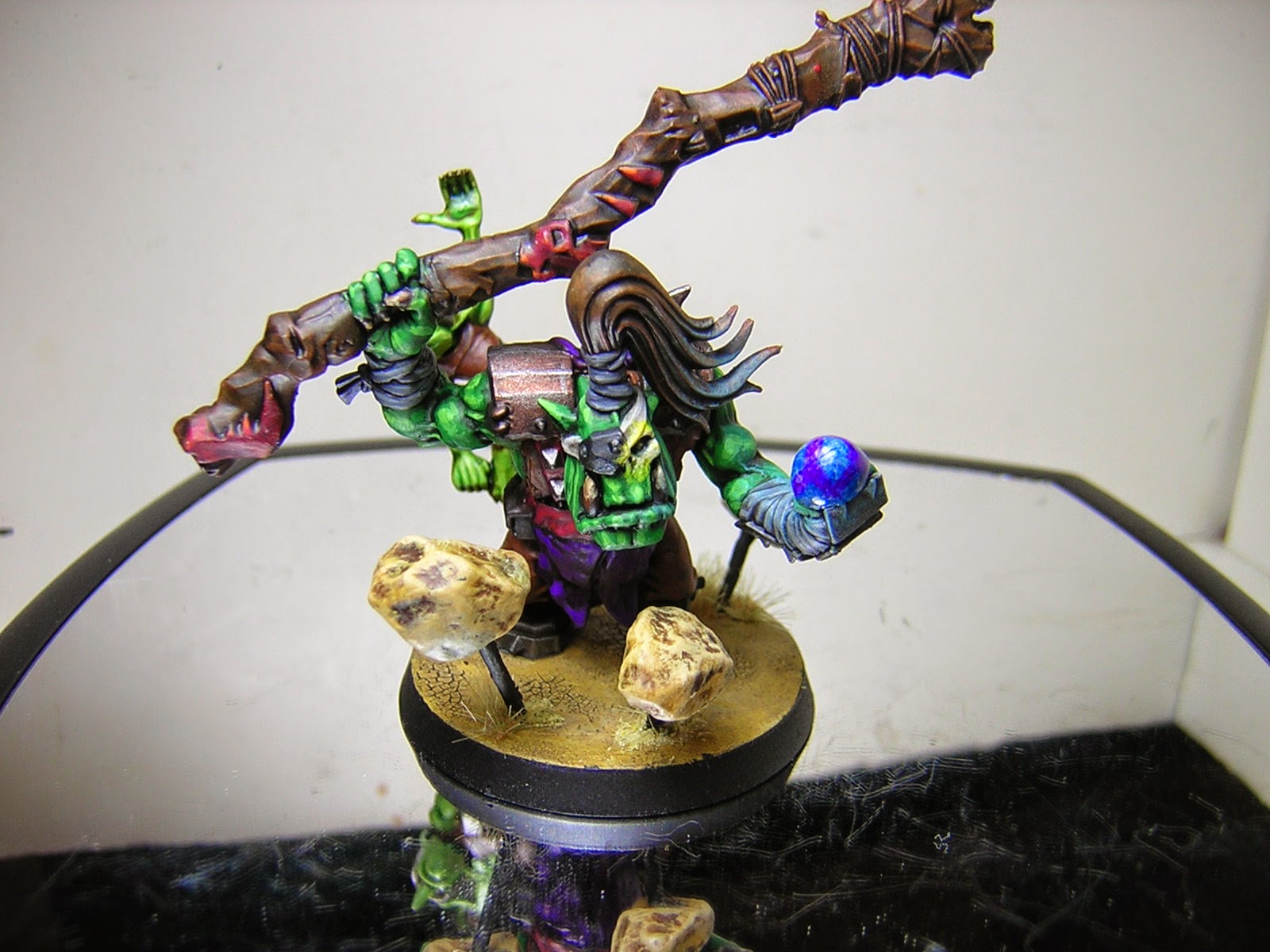 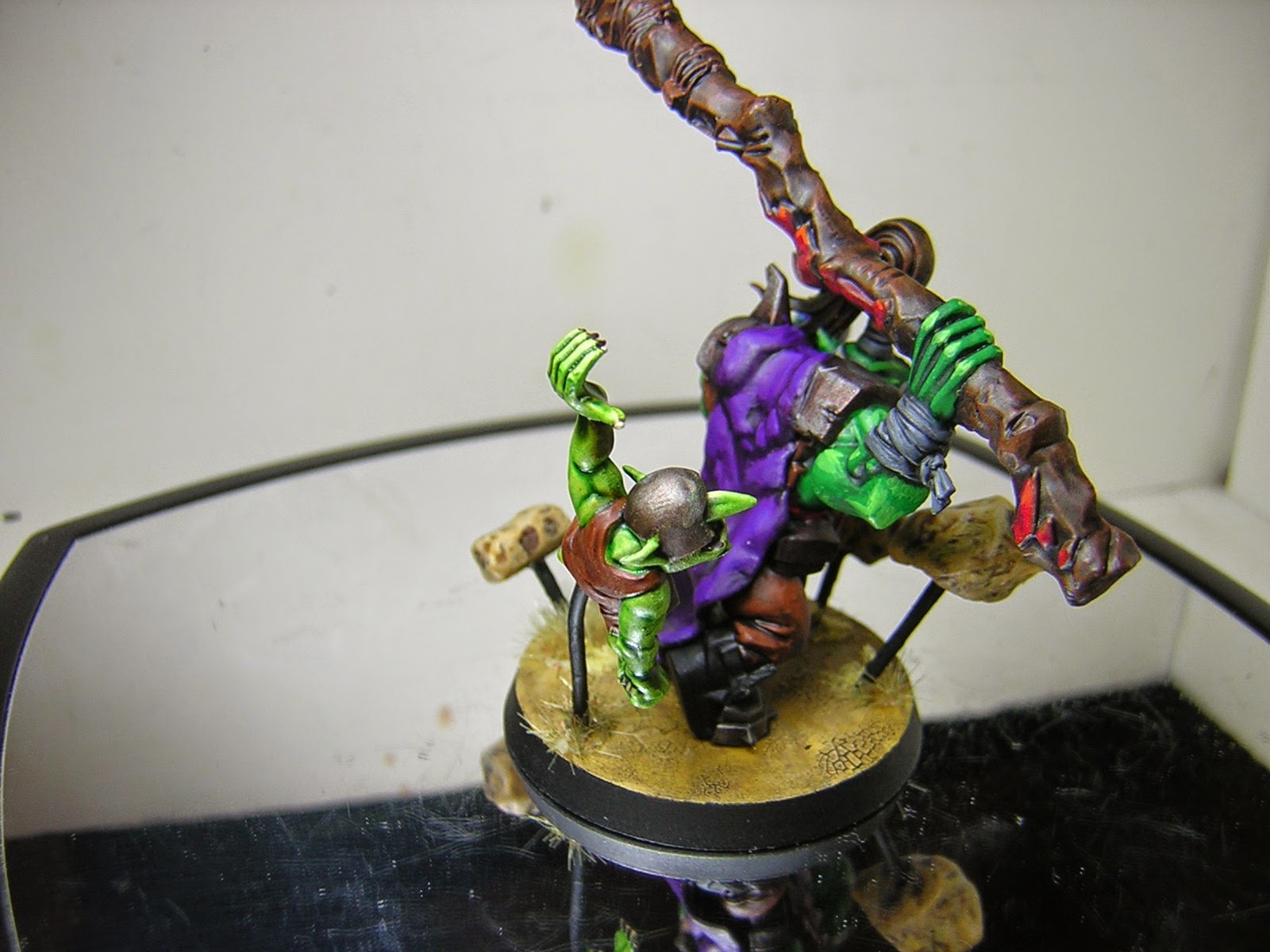 I also finished the grot bomb for the Kill Krusha. 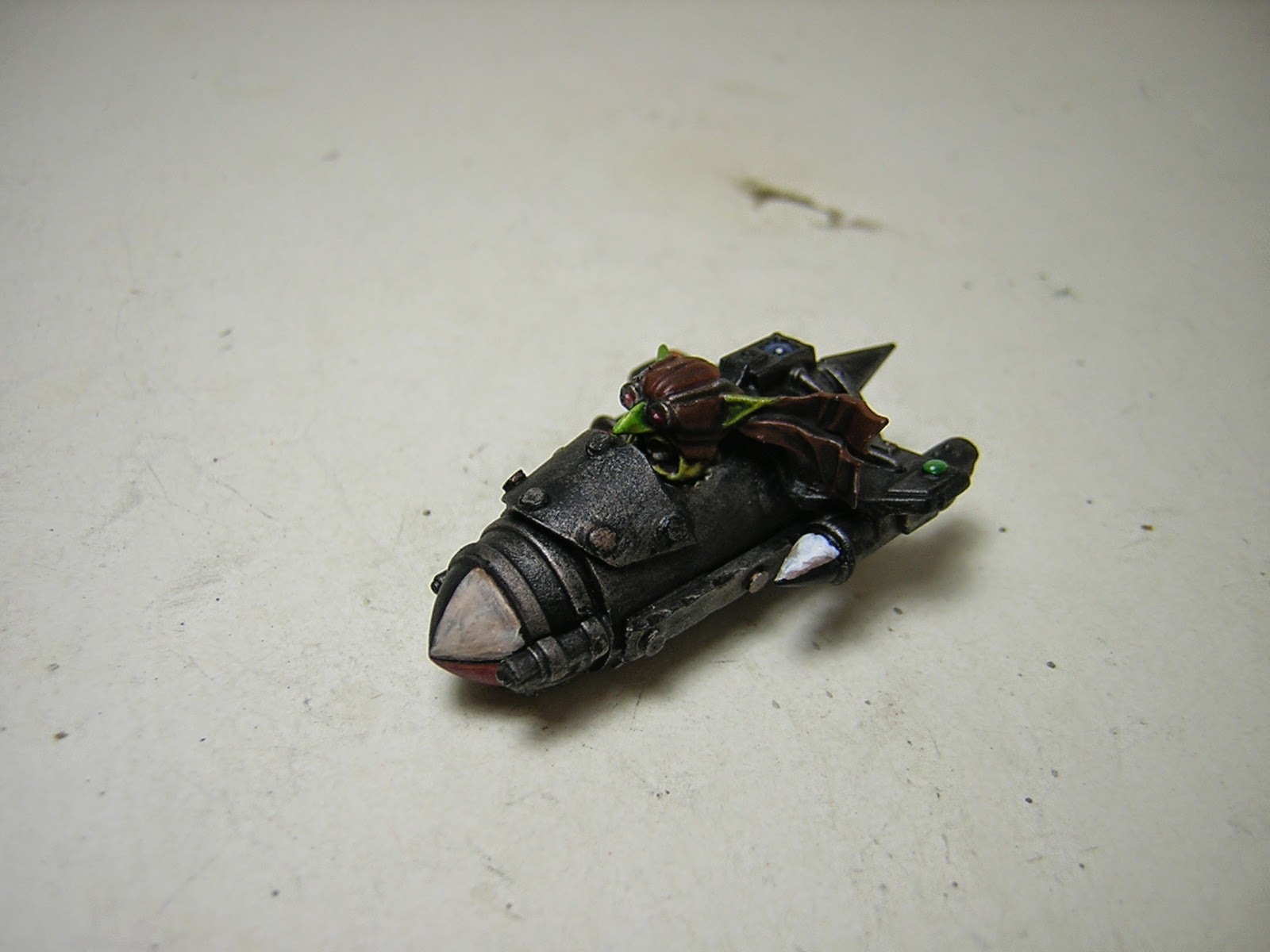 So now I have my 2 wierdboys, just in time to start back up my weekly league play next month.

Next up?  Another commission, along with the Deamonettes.
Posted by Sorien at 2:36 AM No comments:

What are deamons doing here?!?!

After blowing all my previous hobby budget on 7th and the Ork book, I was finally able to buy models. I went with a box of deamonettes so I can finally have some legitimate models to summon with my wierdboys.  I was originally going to mix ork parts and deamonette parts but the differences between them just makes that impractical and would look silly.

So I just went stock on these models. Which may influence the way I go forward with this stuff. I mean eventually I want 30 deamonettes, a bloodthirster, 3 screamers, 5 seekers, and maybe pink horrors and heralds. Basically a decent deamon army!!  This is in addition to the Chaos Space Marines I'm planning on building with a sorcerer, noise marines and a hell drake.  Plus 1 or 2 Gorkanaughts, and a 2nd Riptide. LOL no chance of my buying all that any time soon.

In other words, there is going to be a lot of Chaos on the table for a long time.  The Blood Angels and Space Wolves are now even farther back on the burner then before..but I do have all the Blood Angels I built primed finally. 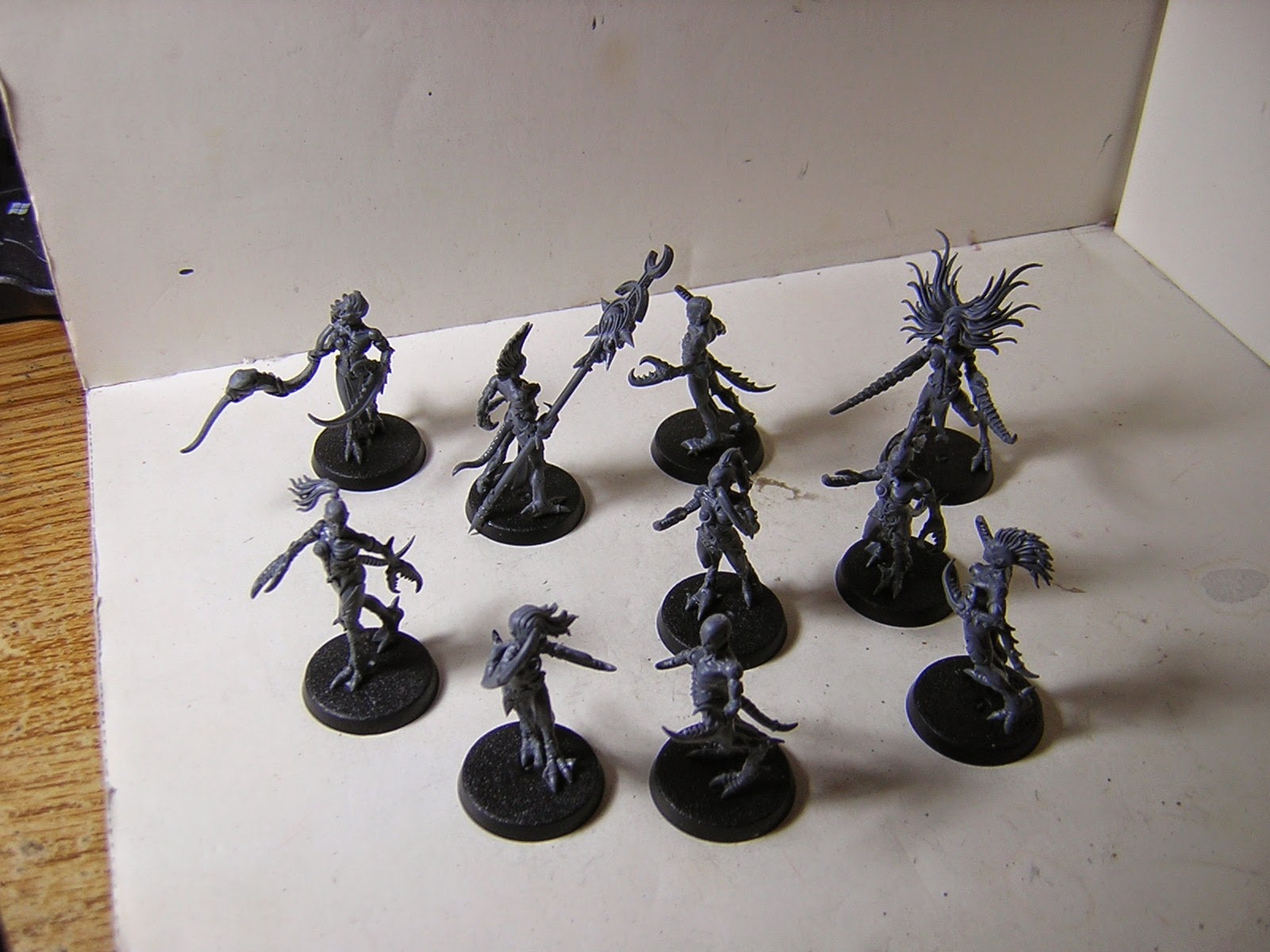 I'm working on finishing the wierdboy, and then I still have Trukks and Mek Guns to paint! Oh, and some commissions on top of it.  It's been a while since I've had such a full paint queue and will for a long time to come.

The best part is I plan on painting the skin on these like I did my Cybork KFF Mek, which is a combination of grey, green and purple. I think it will be perfect.
Posted by Sorien at 1:42 AM No comments:

First, a second Imperial Fists Storm Talon for commission.  Pretty much identical to the first, with the exception of the number and name.  I enjoyed this a lot, having figured out exactly what to do. 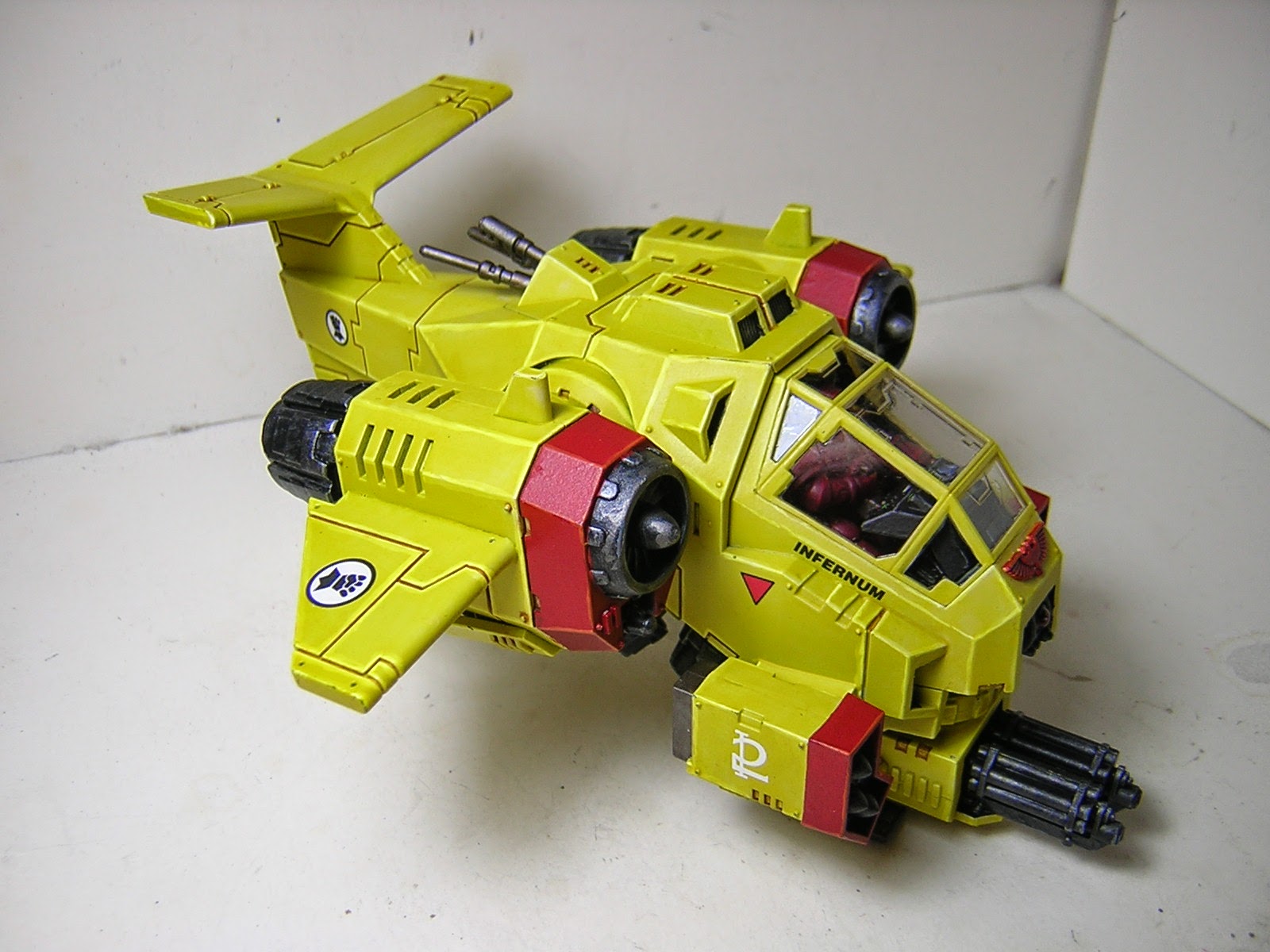 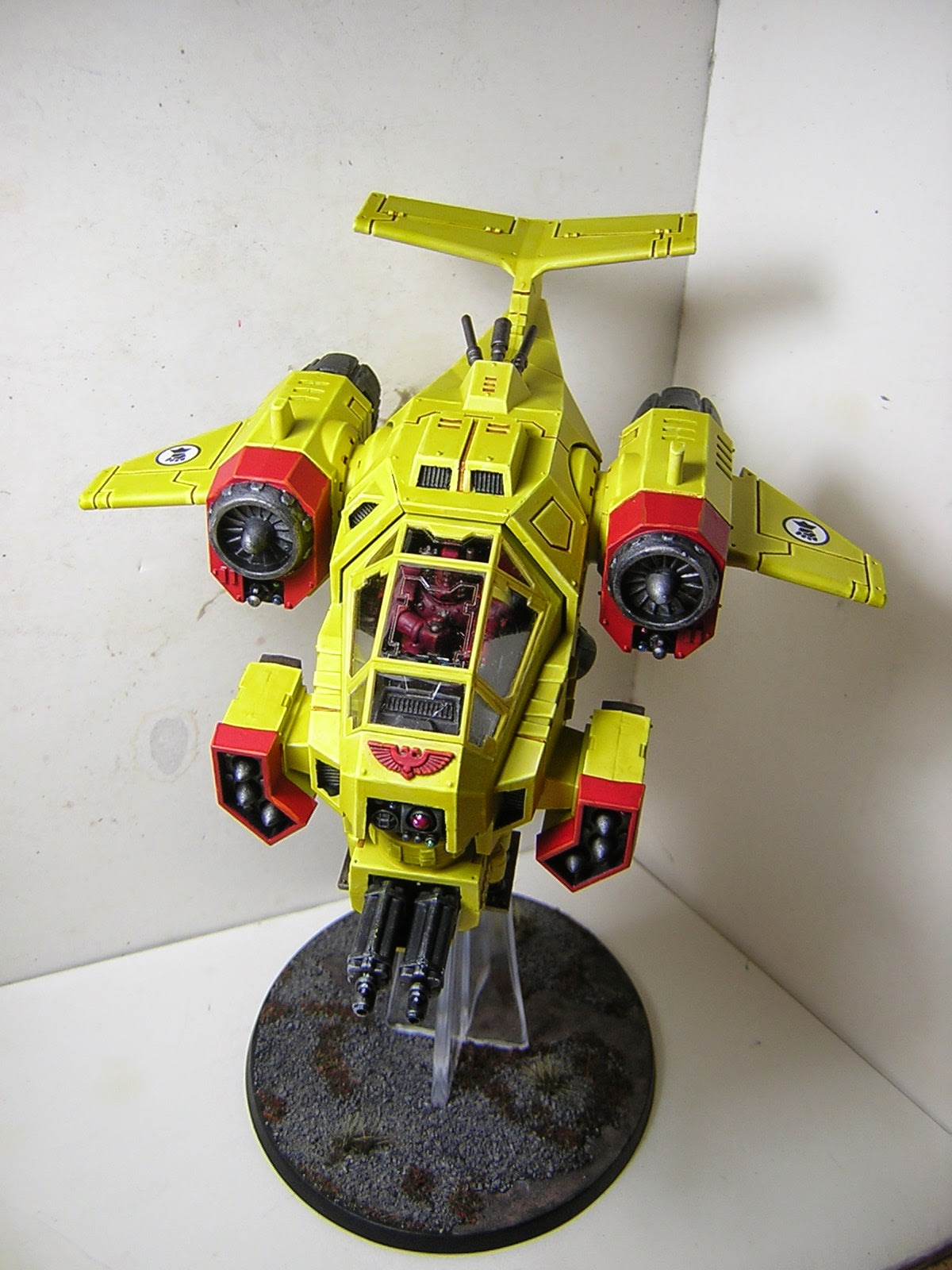 Second project was just one night of painting..a pair of meks.  Just boring, standard meks built from the Loota/Burna box.  I was thinking about magnetizing an arm in case I ever wanted to take killsaws. I still can sometime in the future, but for now it's good.  I also might need one or two with rockkets..not sure yet.  so many options but keeping them cheap is probably the best way.

The main use for these guys will be to have a character to babysit lootas.

What I like best about these is the mix of metal colors - Tin Bitz (I have a barely used pot of it), Leadbeltcher and Balthasar Gold - all with a Necron Compound drybrush. 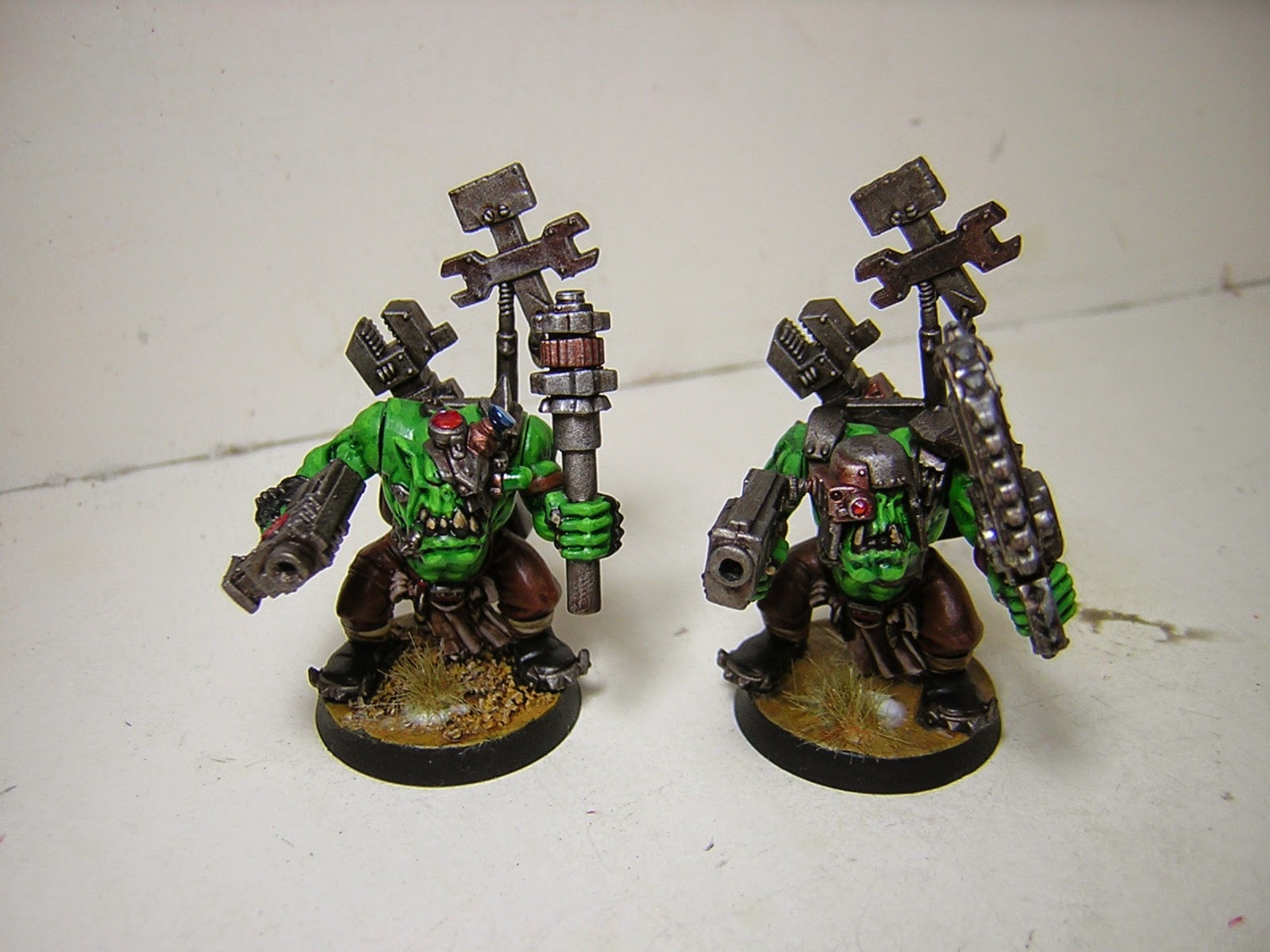 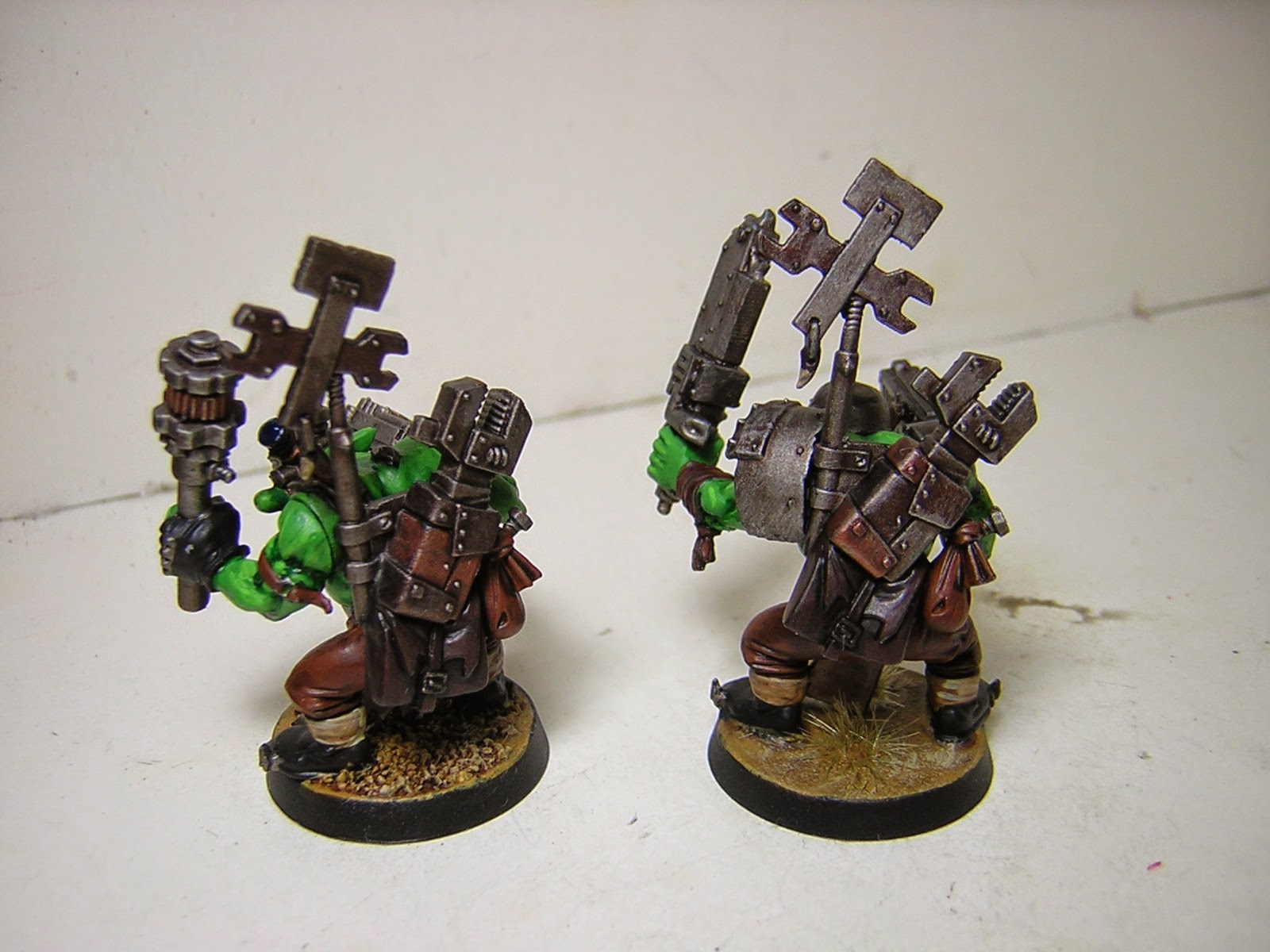 Anyway not sure what's next on the bench.  I might paint up the VSG...
Posted by Sorien at 6:05 AM No comments:

On the table: Ork characters

So I need another wierdboy, and went with an AoBR nob and a Big Stabba from the savage orc box to use as a weirdboy staff. Still need to do some greenstuff work.

Also dug out a couple meks to use as characters in my loota units. The 2 I have now have KMB's which I don't really plan on taking.

I might magnetize the arms just in case I ever take a killsaw. 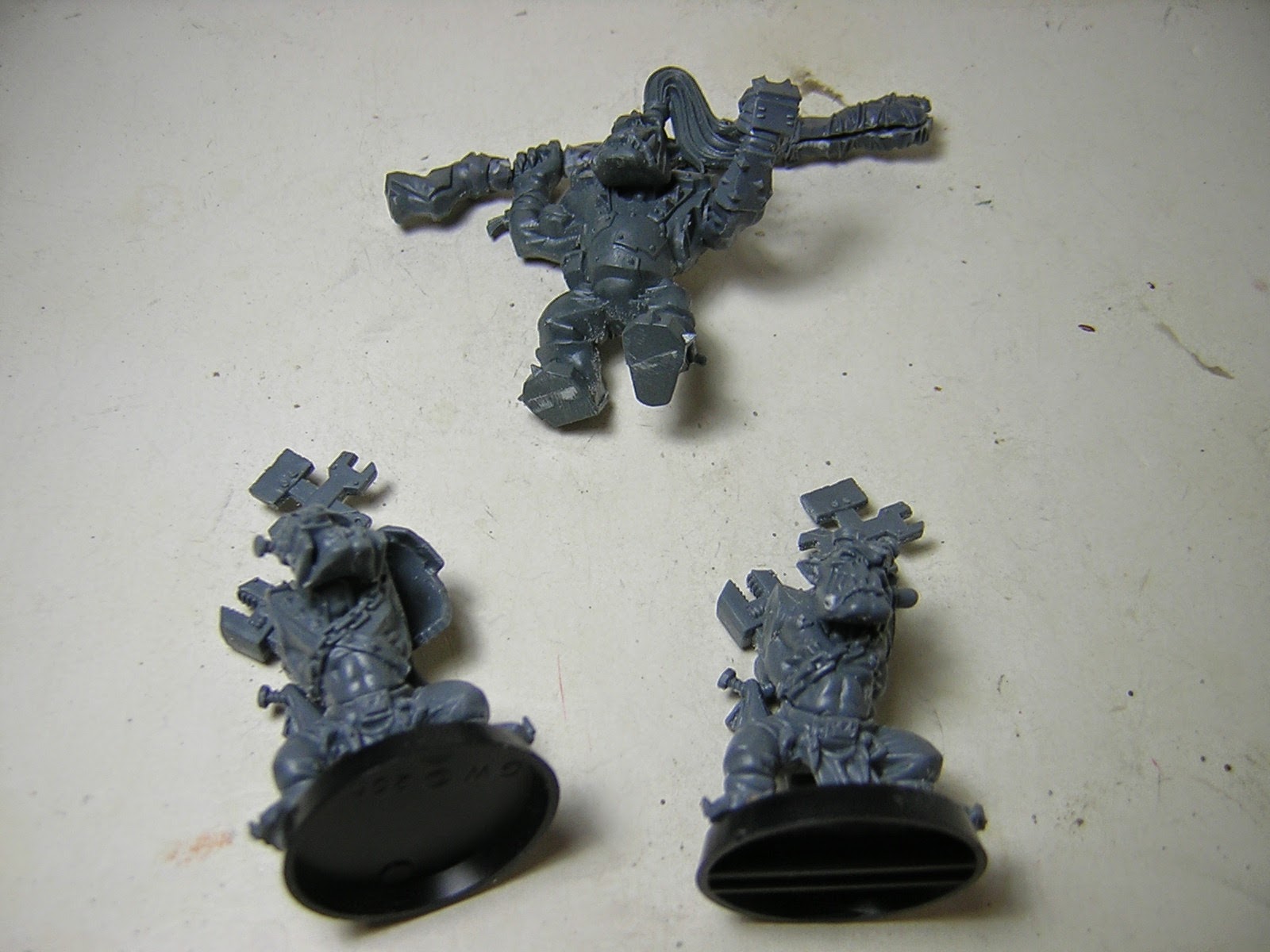 I also finally finished my Longstrike, including modifying one of my Hammerhead turrets to be able to swap him it. It's not magnetized, doesn't really need to be. 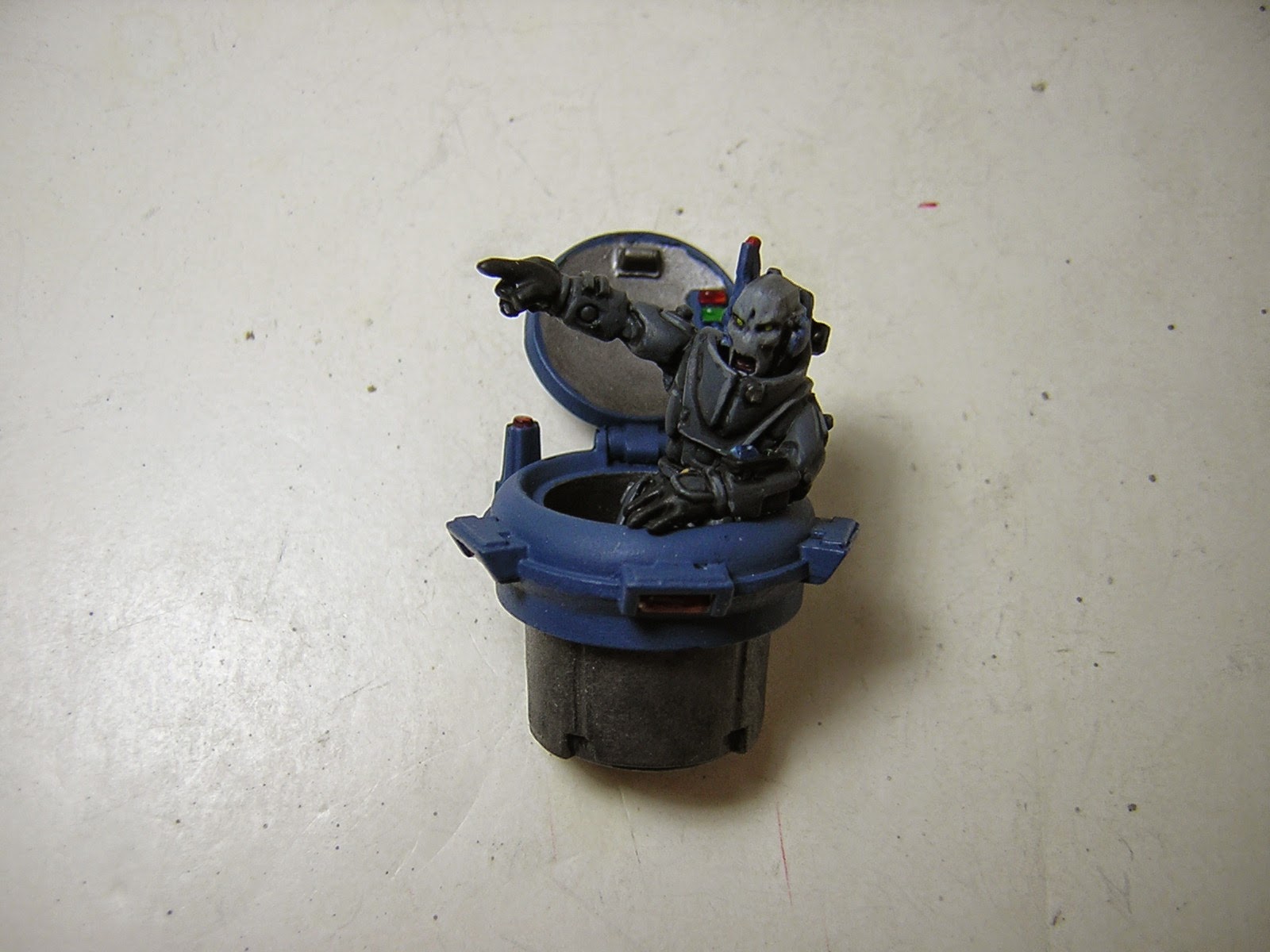 I'm in the last stages of another Imperial Fists Storm Talon commission as well.  All of these should be done in short order.
Posted by Sorien at 1:34 AM No comments:

Last few days I've been finishing up the last of my Stormboyz and even painting my long-neglected Zagstruck model.  Finished all of them today, finally.  I've had to strip, clean, re-assemble and repaint the entire unit. I went with a WW2 inspired olive drab camo pattern.

I have 19 regular stormboyz, nob with PK and Zagstruck. I wouldn't mind expanding the unit to the full 30, so I'll keep my eye out for cheap OOP metal stormboyz on ebay when I get money.

I didn't dive right in like on other books, but instead sat back and watched and read into other people's experiences with the new book. Then combined with my own ideas I built my first list for a pickup game yesterday.

The new waggh! rule is pretty fantastic, so having a warboss warlord is almost mandatory IMO. Bought the lucky stick, but it never came into play this game.  I stuck with the cybork despite how much it sucks.  I would also normally take 'eavy armor, but I was exactly 4pts over..

HQ: Mek
Just because I could.

Troop:  30 Slugga Boyz
'eavy armor, Nob w/PK and bosspole
This is the main unit, with much more survivability then regular boys.  Slugga boys really needed to go down in price, not stay the same, but I digress..

Fast: 2 Deffkoptas
Buzzsaw
I still love me some deffkoptas, and the slight drop in price is pretty cool.

Heavy: 2 Mek Guns
Kustom Mega-Cannons, 2x ammo runts
I love these, for the price the hitting power can't be overstated.

Ork Horde Detachment
I took this just for the extra HQ slot, even though it means losing Objective Secured.

HQ: Big Mek
KFF, bosspole
The KFF isn't the 50pts of broken it once was, and it never really came into play until late game.  I'd rather have the old version and risk coming up against ignore cover armies, that's for sure.

HQ: Painboy
He rode with the KFF and Warboss in the 'ard boys unit.  HUGE.

A couple of trukks that can provide quick objective grabbing, but remember they don't have objective secured.  I kept one trukk in reserve, the other in range of the KFF.

I knew I would be playing Tau, but I went with this as-is anyway.  I wanted to try out the big mob of 'ard boys with FNP and it was just fantastic, taking round after round of shooting.  I did fail 1 morale test, though, but with armor and FNP that resulted in no casualties.

Another HUGE help in this game was getting the warlord trait that allowed all units within 12" to use the warlord's LD.  I can't stress how useful this particular trait will be going forward. I liked it before, because I could keep my lootas on the table but now it's good for everyone.


Pretty much the entire game both my psychic phase and Mek Guns were fail..throwing 8 dice as possession and failing!!!  The scatter die wasn't on my side, that's for sure.

That's the nice thing about mek guns, they are so cheap that if they scatter a lot an fail, you're not missing much.  My opponent however didn't like them, and wasted a turn of shooting at them, only to realize how useless that was.  If I had been rolling better on scatter, I think the game would have been a lot more of a blowout for my side.
Posted by Sorien at 4:32 PM No comments: