Another completed commission to go with the rest of the army I've painted.  One more drop pod to go - which is currently in the stripper. 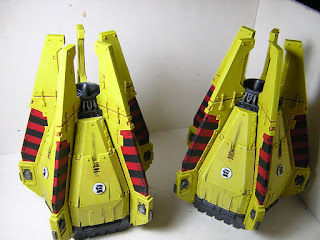 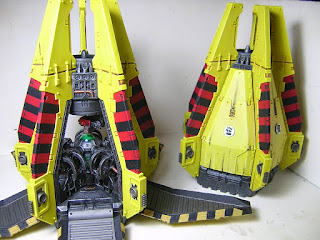 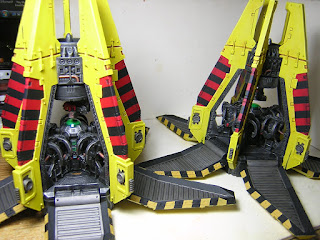 Unlike the rest of the models I've done for this customer, he wanted a bit of weathering on these, but not a lot.  So some black smoke marks from the vents on the doors and I mixed some black and white into a grey for a bit of carbon scoring.

In between steps on these I've been working on the last of my power armor models, and I've made some darn good progress with 4 Grey Hunters and 3 Death Company now complete.  Once again, need more 32mm bases!

While putting away the 2nd set of Sternguard I got everyone out. 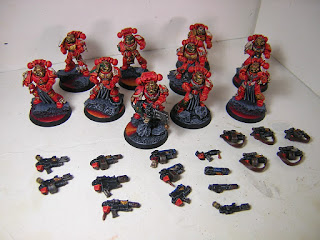 That's the problem with magnets - it makes it so there is so much more to paint!

Making the Dante-Thunderwolf deathstar even better..

After the few games I played with my Thunderwolf/Dante deathstar I found several flaws, the most glaring of which is the lack of firepower..not everything can be killed in close combat.

I think I found the best solution..and it even makes the deathstar better!

I had to neuter  the infantry units to get it to fit, but really that does not hurt me that much..as they aren't that good to start with.  The best part is the ObSec drop pods to sit on objectives.  I also had to drop the Wolf Lord to a WGBL.

But adding in the 10 Black Knights gives me a ton of plasma firepower, and they are just overall pretty darn awesome..with skilled rider and Ravenwing they can re-roll jink saves allowing them to stick around for quite a while.  Even in close combat they are not bad, with S5 rending hammers.

Especially with the wolves coming right at you.

Sammael was almost an afterthought..but then I actually read his rules!  By adding him to the deathstar and making him warlord the whole unit is just that much more beastly.  First, he's fearless which is something the rest of the unit lacks.

Second, his warlord trait is rapid maneuvers.   That adds 3" to any run or charge move.  HOLY SHIT!!  That totally counters the loss of fleet by having a mixed unit and gives them an incredible threat range. To top it off he's EW for those S10 shots.

So now I think I'm off to ebay to pick up some Dark Vengeance bikes...
Posted by Sorien at 12:48 AM No comments:

I few months ago I painted a 2nd tactical squad for my Blood Angels.

After playing a few games with them though I've come to realize just how badly they match up to the rest of the army. I painted them with Mephiston Red before I found out how much of a match Evil Sunz Scarlet is to the old Blood Red.

Every time I get them out they really annoy me.

I'm leaning towards #2 right now, and the funny part is that it won't be the first time. I already sold of a unit a long time ago and I didn't care. But now in this new crappy BA book where the RAS are not troops I have to have something.

I'm pretty sure I have enough bits to put together a whole unit of marines, especially if I pick up another BA upgrade sprue..but then the whole BA tactical box really isn't that much more.

Anyway I have enough stuff to paint and no where enough money right now so it's all just conjecture for now.
Posted by Sorien at 5:15 AM No comments:

Finally finished the 5 Sternguard. I have picked up another commission so that's why it took longer then expected.  But that's ok. I still absolutely love the combination of the Sternguard box and the Blood Angels Tactical Squad box.. so much detail on all the bits and they work so well together. 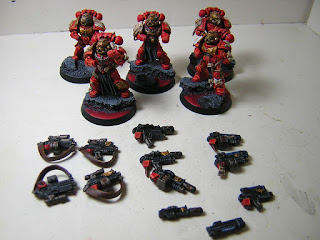 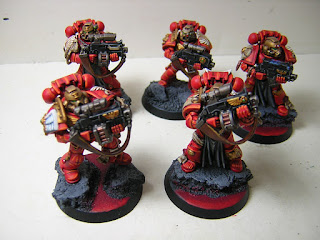 Lots of combi-weapons and the fancy Bolters from the Sternguard box makes jobs like this take so much more time. I'll get a full group shot eventually.

Next up is finishing the commission and starting in on some more of my own power armor stuff. Probably a few Grey Hunters...not sure yet.
Posted by Sorien at 3:49 AM No comments:

Acquired in a trade with the doors already glued shut, I had originally intended on having this a Blood Angels drop pod, but doing it up for my Grey Hunters just made more sense.

I also used it as an opportunity to try out some new techniques: dry brushing flat armor panels and oil paint streaking.  The former was more successful then the latter, but still came out pretty darn good.

Anyway a couple pics and I'm off! 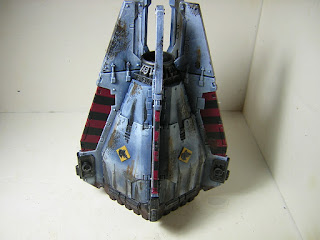 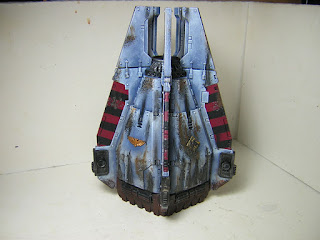 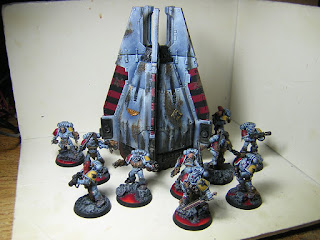 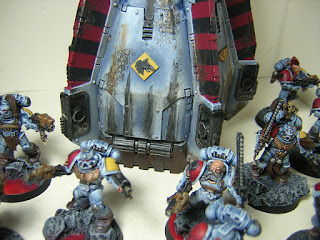 Posted by Sorien at 2:06 AM No comments:

Not many posts, but much painting going on..

I've just about finished up my Space Wolves drop pod, which I used a couple techniques I had not used before.

Also in the home stretch of my Sternguard, and I also have done some work on my other BA drop pod.

Picked up another commission of an Imperial Fists drop pod as well.  So many drop pods!!

I've posted many updates on my Twitter, so check that out if you want more frequent news from me!

thanks for tuning in, more to come!
Posted by Sorien at 3:25 AM No comments:

Continuing to push towards completing all my Blood Angels models, and wanting to play them a little, I finished another unit.

4 regular bikes with 2 grav guns and a combi-grav.

For their first game they did pretty well..first soaking up a whole lot of shooting leaving just 1 behind, but that one guy put 2 wounds on a Wraithknight and killed 2 Wraithguard before valiantly sacrificing himself to d-weapon overwatch. 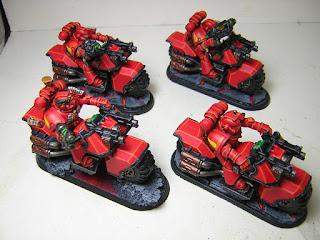 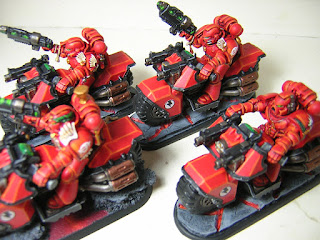 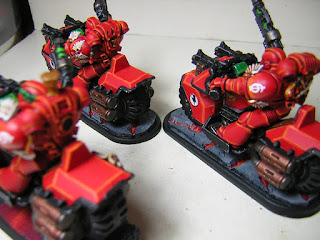 I also did 2 Grey Hunters with Plasmaguns, in case I want to swap out the melta I have now.

Now I'm pushing forward yet again and have started the 5 Sternguard..just need to dig up more combi-weapons.

Posted by Sorien at 2:58 AM No comments: