A christmas present for my cousin. Kitbashed/stratchbuilt Vulkan to match his Dark Angel Green army. 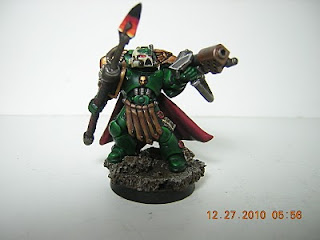 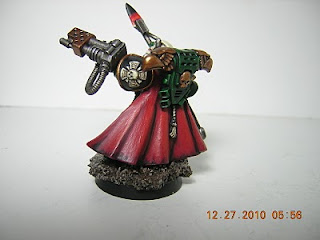 Got my captain and predator base coated, so those will be the next projects.
Posted by Sorien at 3:00 AM No comments: 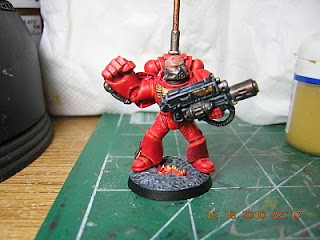 So I finally finished the 2 infantry models I've been working on. I had 5 arms to paint for the sergeant lol. This is how he'll probably be run most of the time.

First I need to change the squad markings, so they match the Rhino. The 2nd MSU assault squad has it's own Razorback on the way..currently working on the interior.

I have a flamer and plasma guy for the unit. I need to re-do the plasma guy so he's magnetic with a melta option.

Don't even know why I painted him. He's been in my project box most of the year, but I wanted to paint and didn't have anything else ready to go at the moment. And the crappy backpack does not fit, wtf? 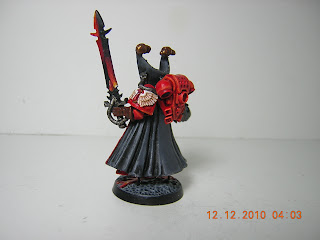 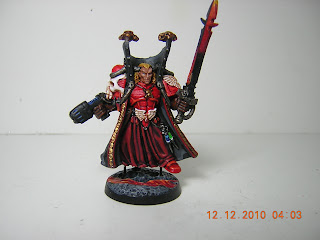 Posted by Sorien at 3:01 AM No comments: 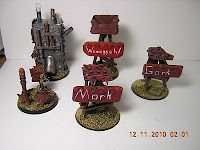 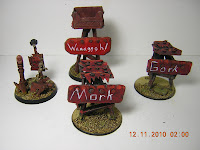 Finished all my objective markers. Very simple, just some boltgun then stipple on Vermin Brown, Dark Flesh and Blazing Orange for rust and a wash of Devlan Mud.

Finished the 2010 Freebootaz painting challenge with all gold. Next year won't be as easy because I'll be doing a lot of fantasy models.

Also finished the last of the boys for my 2nd shoota squad. I really don't have any boys left to paint unless/until I redo my stormboyz. I've got other projects in the way though. I will probably do rockets for my original shoota boys squad soonish. 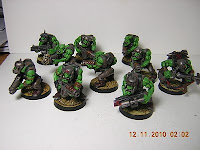 That's it for now! Next project is finishing my Blood Angels (Until I get a Stormraven) followed by the battlewagon.
Posted by Sorien at 1:23 AM 2 comments:

Finally getting around to part 2. The more I play the demeched Orks, the more I like it. I think though that while nob bikers are amazing, they also are the victims of all the anti-vehicle shooting that has no other targets. So it comes down to how many cover saves I can make. It's not exactly an effective tactic. I'm thinking about replacing the whole thing with a full unit of normal bikers ..12 bikers for 20 pts less. Means I lose a scoring unit though but I think 13 bikes (including the warboss) will be quite the enticing target lol.

But it may be a while before I actually get to deploy this..I still need to paint a bike (I only have 11) but I have an old bike sitting around I bought off ebay. I'll get that done soonish.

Anyway back on topic. First thing I want to talk about is tankbustas. tankbustas are a much maligned unit, but I don't think it is entirely deserved. However they are not a bad unit when deployed in the horde mentality.

The cause of the problem is the "Glory Hog" rule Ork Codex, page 42.

"Tankbustas live for the really big kills. They must always attempt to shoot at and/or assault an enemy vehicle if there is one in line of sight, regardless of range. If there is no visible vehicle target, the Tankbustas may select a target as normal."

This means that as long as they see a vehicle, they may not shoot or assault a non-vehicle target. Some people still think that they must shoot or assault the closest vehicle, which simply isn't true. Also with the new codex, they took away the tank hunter USR from the tankbustas, which *is* a big hit to the power of the unit. I think keeping the USR wouldn't have really been overpowered, so I'm kinda sad it's gone.

Also, the glory hog rule apply to movement in any way, so they can move as normal no matter what. So there is no way to "kite" them around the board unlike say, death company. It means you can carefully move the models so they can't see a vehicle, like hiding behind a wrecked rhino. I've used this tactic, allowing me to shoot at a unit of sternguard, devastating it.

Not to mention that if you play Tyranids or any other low- or no-mech army, the tankbustas are free to do as they please. Tankbustas are really good against 3+ save TMC's :)

So in 5th edition, where mech is king, the main detractors to Tankbustas say that vehicles can just move around, out of range, rendering the tankbustas useless. But this just does not mesh with reality. mech guard and MSU Marines, heavy on las-plas razorbacks don't move around, preferably at all! The line up the AV 11/12 vehicles and dare you to come to them.

This is the perfect situation for tankbustas, completely negating the downsides of Glory Hogs. A smart player will probably target the tanbustas first in this situation, even over lootas. If the tankbustas are allowed to make it across the table, the tankbustas bombs will completely devastate anything sitting around. Don't forget they still get Power of Waagh! so that one turn fleet can take someone who is unprepared quite by surprise.

I like to run a unit of 12, with 1 tankhammer, 3 bombsquigs and a nob with the only upgrade a bosspole. I built this unit so it fits in a killkannon battlewagon, but it's also a good compromise on points and survivability. Having the bosspole makes such a difference compared to lootas.

When deploying, they need to be behind your screening unit to gain that all-important cover save but they still need to be as close to the deployment edge as possible so they can be in range as soon as possible. This can be a hard arrangement to make sometimes but it is vital. Usually after the first volley a smart player will target them so they can't get a second, but hiding them among the horde can lead to mistakes, an "out of sight out of mind" situation where they are forgotten about. But if you take some speed, such as bikes or nob bikers, that some of the pressure should be off the infantry.


The biggest problem with tankbustas is that they are elites, and the 3 elite slots are hotly contested in the Ork codex. Between tankbustas, lootas, kommandos and burnas (and even meganobz) you have a lot of choice..and all of them are really good units. In my horde/demeched lists I usually run 1 unit of lootas, 1 unit of tankbustas at 1750. At 2000 I'd add in Snikrot and kommandos. This is a good balance, giving all the power and 3 really annoying units that your opponent has to deal with. The idea here is to do some damage and take pressure off the boys.

Lootas are awesome, but the more I take the more I find it hard to find cover. Getting in area is essential with Manticores out there, as barrage can wipe you out if just hiding behind something. This is where the tankbustas are better, as they can move up with the KFF always getting that cover save. Lootas are static, a firebase. Screened by grots and lobbas, they should be able to survive the wolf scouts. tankbustas don't have any such problem. again, hiding them in the horde is a lot of fun, and gives your opponent way too many priority targets.

Part 3 will be about the very important, in fact invaluable, screening unit.
Posted by Sorien at 8:35 PM No comments: