On to the next project!

After finishing my Fist of Medusa Strike force (which isn't as competitive as I had hoped!) it's time to decide what to work on next.

First option is to move from the Medusa to a strait up Gladius.  It would require a lot more models, and a lot more Evil Sunz Scarlet.  I think that's not the way I want to go.

Second option is to build up the army I put aside for the Iron Hands - Space Wolves. This would mean adding more Wulfen and Thunderwolves to the stuff I already have.  And lots more Drop Pods.

Third option and probably the easiest to paint is a making a Lion's Blade force to add to my existing Ravenwing...based largely on the winning LVO army from last year.

Fourth option is to build up the models I purchased earlier in the year - Tau and Necrons.  My idea is to run a Conoptek Harvest along side the Tau.

Last night I even created a first draft of the list:

I would have to buy 2 Ghostkeels, the Stormsurge (which I want anyway) and a 2nd box of Wraiths.  Not a lot of boxes but a lot of money!  I'm looking for feedback on how this list would do in current ITC meta...extreme competitiveness.


The 5th option, and probably the one I would want to do most but be the least competitive, is getting Renegade Knights for my Ork army.

So that's where I'm at. I'm going to be working on the stuff I already have while I decide on where to spend money.
Posted by Sorien at 2:45 AM No comments:

Iron Angels at a tournament - Fist of Medusa Strike Force.

Didn't take any pictures today but I went to a 1 day 3 round ITC tournament.  I busted out my second Stormtalon in just one day to get ready.

Pretty straitforward war con list with lots of grav.  after seizing on a 5 because of the knight, rolled up veil and started chomping through the army.  Took the knight down with a combination of drop pod melta and Stormtalons.   Didn't get warlord, but 10-1 win.

This was killpoints and he just didn't have that many to give up with a lot of points in a single unit of Ghostkeels and a Stormsurge.

This time I seized on a 4 due to the superheavy and rolling +1 to seize warlord trait.

It took about 4 turns to kill everything I had except the deathstar and in that time I was able to take out the Ghostkeels and 1 Riptide.  He made a bunch of 4+ invuls on the Stormsurge vs grav though for sure.  Ended up running away from me and hiding while getting good malestrom rolls.  Tied on secondary, and I got king of the kill resulting in a 3-7 loss

Game 3 vs Gladius + summoning (emperor's will)

Last game I was getting tired but played it out. He used a librarius conclave to summon a heap of deamons.   He let me go first after bunching up Rhinos in the middle.  The deamons didn't do anything and was used mostly to block movement.  After the first turn he started to split up the transports effectively.  As time was running out the game came down to killing the last 2 regular bikes on my objective while my deathstar held his.  The result was a tie on primary, he took secondary and we both had linebreaker.  Another 3-7 loss.


I'm pretty happy with how everything worked. Considering these were just games #2-4 with the list I still have a lot to figure out, mainly how to deal with more MSU armies. I think concentrating the death star on one flank and literally everything else on another will be something I need to try.

Dark Angels? What is this??

I had this unit of Assault Marines built up at one time with the goal of painting them to try and sell on ebay.  They've been sitting in my project box for months now, and I finally decided to do something with it. 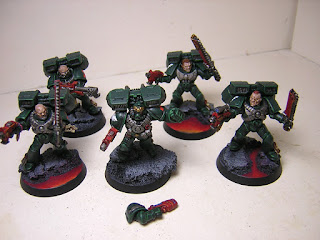 Lately I've had a wild hair to expand on my Dark Angels a little bit.  Kinda like a less- competitive Marine army to have around for fun.  I have my 15 Black Knights and Sammael.  I also picked up this guy from my FLGS for just $6 and then re-based and varnished him.  This makes just the 2nd model I own I didn't paint myself (the first one being Zhadsnark!). 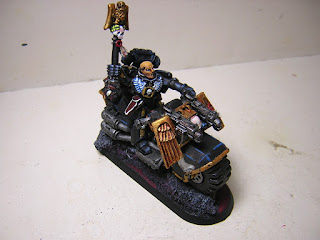 My goal is to eventually add in the entire contents of Dark Vengeance to the army and maybe a Devastator squad (since I have 2 squads of them unbuilt).  I also want the DV chaos stuff to add to my Chaos army as well so someday I'll get a whole set for myself.  That would put me around 1800pts of DA models.  Could be fun to play.

I did manage to finally get my 2nd Stormtalon so that's my next project to finish up the Fist of Medusa Strike Force.
Posted by Sorien at 4:05 PM No comments:

My top 5 ships we need in Star Trek: Attack Wing

I haven't posted much about Attack Wing but I'm as passionate about it as ever.

Wizkids has postponed most of the new releases and are currently putting out repaints. Which is fine because most of what is being re-released was hard to get for new players.

But anyway, here is my top 5 ships we NEED in Attack Wing. 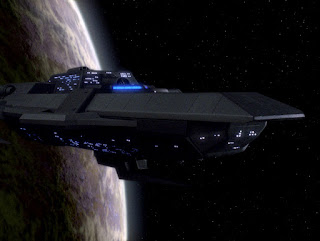 "With a single thought, Kevin Uxbridge killed the entire Husnock Race (50 billion lives) everywhere in the universe.  Their powerful ships remain."
This is an interesting one because there can't be any crew or captain cards to go with it as the entire race is dead.  But it could be very powerful addition to the independent faction along the lines of the Prometheus or the Scimitar. 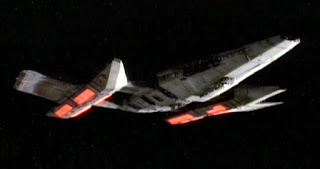 The Tamarian vessel with toe-to-toe with the Enterprise D. It should be a very powerful ship and WizKids (well, a proper writer anyway) could have a lot of fun with it putting all the cards in Tamarian.  Another good ship for the Independent faction....or maybe a big release with enough cards for a new faction!!! 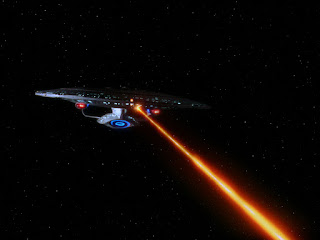 This time we move to the Mirror Universe faction and the Enterprise-D from Yesterday's Enterprise.  This should be a much more heavily armed version of the ship, modified for all-out war with the Klingons.  Also have some bad-ass MU faction cards like a killer Picard so that faction can try and catch up.  I should add that this ship IS coming out, as part of an OP event..but it needs to be a retail ship.

This won't be the most powerful ship in the game, being it's a 20-year old design but it's something fans desperately want.  Also many more cool cards could be made.  The only ship on this list for Federation faction as well. 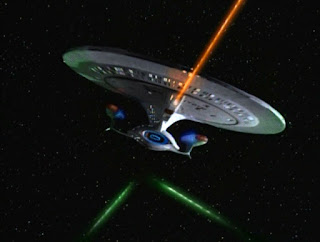 This is is. This has to be the most powerful ship in the game.  A cloaking device and the phase cannon would put the PWV above anything else..maybe an 8. However adding a new mechanic..such as a 45 degree arc just for the cannon would be quite intriguing.


That's it. I know some people would like 1 and 2 switched, but this is MY list after all ;)

There is some sort of Kill Team campaign put on by GW this month, and my FLGS is running one.

First games were Friday night, and I got in 3 games - 2 normal and 1 of the 4-player scenario in the campaign set.

For ease of math and carrying I just brought 5 Black Knights.  Exactly 200pts. Lots of good shooting, CC and survivability. 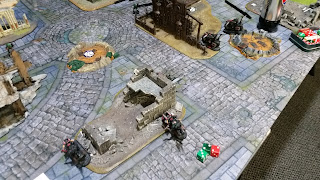 For specialist I picked one guy with Sharpshooter (ignore cover), one guy with WS5, and one guy with re-roll to wound in CC.  The leader got FNP (we were able to choose our warlord trait).

Turns out TL plasma with ignore cover is HUGE.

The last game there is one objective in the middle and everyone starts in each corner in a tiny 6" bubble. I just moved right to the objective and sat there.  I gave up linebreaker and warlord, but was the only one on the objective at the end.

The campaign allows you to spend additional points, and I have been able to add another Black Knight (from the Ravenwing Command Squad since I can't take another FA).

I thought I didn't stand much of a chance with only 5 models but with a re-rollable cover save from Ravenwing they are very hard to kill.   Plus they are bikes, so plenty fast enough to get in CC when needed.

Very happy with how everything played out, and having a 2nd night of 40k is always a good thing!

Posted by Sorien at 9:58 PM No comments:

After months of work I finally put the Iron Angels on the table.

Lacking the 2nd Stormtalon I had to pick another aux choice. I went with Iron Guardians, which is a tactical squad and a dreadnought.  Gave the tactical squad grav and a Rhino, and just a base dread a drop pod.  Had enough points for a 4th libby, giving me a bigger bubble of +1 FNP.


First game against a Necron Decurion.  Sure, not an optimized list but still with the Conoptek Harvest.  Also the player is pretty new to the game as well and his dice were very inconsistent (could not hit in CC, but rarely failed a RP lol) and lastly I rolled pretty much perfect powers with null zone and veil of time.

Didn't lose a single model in the deathstar.  Overall the list was very fun to play and had plenty of firepower and psychic dice.  The 2nd Stormtalon should be on it's way soon!
Posted by Sorien at 4:02 PM No comments: