It's easy to get things done when you get laid off.

I finished up my Savage Orcs and repaired my display board so I'm all ready for next weekend.

The idea behind the Savage Orc color is that they are a "hybrid" between the Icy Orcs and normal Orcs they have encountered and conquered. The blue-green algae is taking over the green algae quickly, but not quite yet.

Each model has individual warpaint, but trying to come up with 34 different ideas isn't easy.  I still like how they came out though.

The final color also pops really well against the white basing, which is what I was hoping from the start. I also added some tufts, man I love these things. 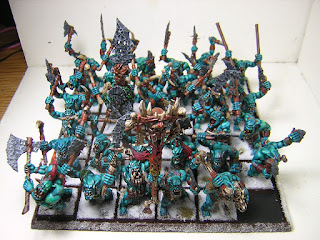 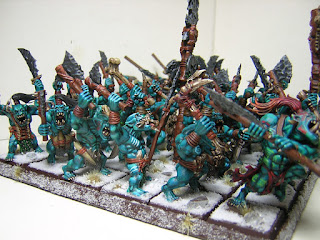 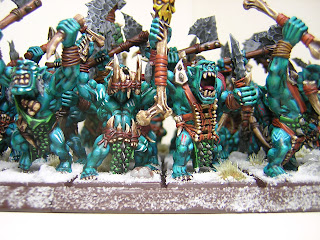 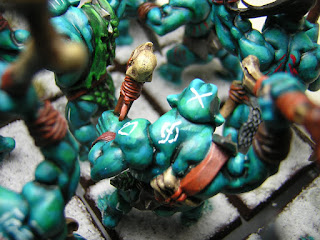 Trying to get some space wolves painted for the first time.We'll see how that goes..

I noticed my blog passed the 100,000 views mark. Not too bad for my little corner of the internet. Pretty happy with that.

The last two games I've played with my Tau have not been very much fun.  I had a 1500pt game vs a Chaos Space Marine/Ork alliance, with a flying MC, a forgefiend, two rhinos and a battlewagon full of boys.  The vehicles died quickly, and the ion head with markerlight support quickly dispatched the units that came out.  It wasn't even close, and not fun for either of us I think.

Tonight, I played against 2000pts of Eldar.   It was obvious my opponent wasn't having much fun..maybe because everything he tried to do I simply lit up with markerlights, took away cover saves - conceal wasn't very useful - and then blew things off the table.   SMS is a pretty good weapon against Eldar troops, and tank-hunting missile pods work well against their tanks.

At the end of the game he had 2 models falling back, and a Farseer on a bike. I had lost my Kroot, 6 Crisis suits and 2 Piranhas.  It wasn't even close. He said "My first game against the new Tau, and hopefully my last."  Sigh. I felt bad.

Pretty much playing against Tau means putting models on the board..and then picking them back up again.

It isn't hard for Tau to completely dominate.  Once they get a bit ahead, it's hard to come back just due to the sheer firepower.

I was talking with a few other players after the games and some of them agree that Tau can be very..well I like the term "turn-key"..it does not take much thought. Just delete units in order of threat.  Other people really enjoy playing Tau, even when dominating.  I almost want to try less-optimized lists just to make it more challenging.

Thoughts? Ideas? Tau aren't unbeatable for sure, but they are really, really good.
Posted by Sorien at 3:47 AM No comments:

There probably won't be much going on for the next couple weeks as I rush to finish my Savage Orcs. I also need to repair my display board for OFCC fantasy at the end of the month.

There is a lot of non-40k stuff on there, so if you don't want to see that don't follow. I'll understand.

When I'm done with that though, I plan on making a display board for my Orks/Tau at OFCC 40k, and doing a complete series on Commander Farsight.

I probably won't be doing any more Talking About Orks.  The next codex is probably too close.  The only exception would be going over the 6th ed codex books. If I have time.

Anyway.  That's it. More updates soon.
Posted by Sorien at 2:28 AM No comments:

Do Tau signal a return to mechanized MSU? (Eldar too, for that matter).

Last few games I've been playing more and more mechanized with my Tau.  It works out pretty well, considering the amount of anti-infantry shooting is out there.  This last week I added in a 3rd HS tank, giving me Longstrike with a railgun, an Ion head and a Skyray.  That's a lot of firepower with a wall of AV13. Add in the Devilfish I run for 20 SMS shots!

Using marker drones instead of pathfinders adds quite a bit of maneuverability and survivability to the marker lights (+1T, +1 armor). I've been moving the commander in and out of the marker units to bolster Crisis suits when needed or markers when needed.

Dropping the gun drones off the piranhas always works out amazingly. Always. A unit that is literally a throw-away unit that can shoot (possibly pin something), contest or score linebreaker is a big thorn in people's sides.

But why does mechanized work?  Well, quite simply: Skimmer + disruption pods (or holofields for the Eldar).  Moving at all, gives you a 4+ cover save all the time.  Need to run for an objective? Flat out gives you a 3+ cover.  Combined with the better-then-marine armors of the Tau and Eldar tanks, you have a lot of survivability.

Also, both tanks can do something. Both Devilfish (with SMS) and Waveserpents actually pack enough firepower to be useful, unlike say a Rhino.  The Devilfish can completely hide and still fire off shots.

Sure, if someone concentrates on the tanks they will die. But with so many other threats, I've not really had too much of a problem with stuff sticking around.

Also, having guys in tanks really helps negate the menace of the Helldrake.

Finished the Ethereal I've been working on.  Didn't put a lot of effort into it, but it still came out better then I anticipated.  I went with layers instead of blending just to get it done.

The real issues with this model were the bubbles. The worst Finecast model I've had..not for the number of bubbles but the places the were.  The fingers on the hand sticking out were very thin. But a few layers of liquid green stuff fixed them pretty well.  This case, the shrinking the LGS does actually helped, as it was able to hug the remaining thin wisps of fingers and build them up over 3 layers. They look fine now. Anyway pics. 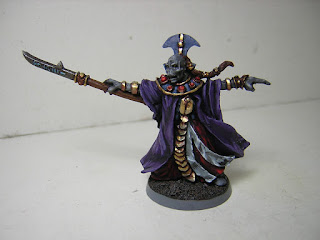 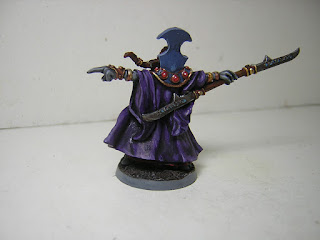 Next project is finishing the Savage Orcs.  I have 16 to do plus basing before the last weekend of June.
Posted by Sorien at 1:22 AM No comments: