Holy crap I finally got something done!  I've spent the last 2 weeks on heavy duty spring cleaning, and that has finally slowed down so I was able to finish my new drones.

bought a bunch of bits off ebay, to build a pulse accelerator, grav inhibitor and 3 guardian drones. Cannibalized many old gun drones but that's fine. 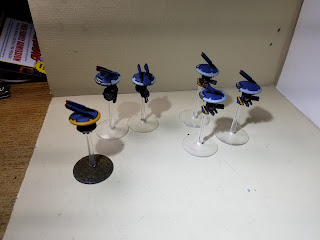 I had so many proxy drones last time after building a list completely ignoring what models I had and didn't have. Other than a few marker drones which I can proxy with gun drones, I have everything I need now.

Picked up my Codex today and pretty much liking what I see.

I think building around a Sept is the way to go, so that's what I did.  Picking Bork'An for my first attempt and putting as many heavy and rapid fire guns in as I could.  Also I love my Ghostkeels so those are going to benefit from the extra range!

Seems like a pretty obvious fire base of broadsides wrapped by firewarriors.  The buff commander is back, kinda, using command and control node stratagem when needed and the drone controller means the 14 marker drones have a better chance to hit.  The 2nd commander will manta strike to go for the kill on something important...but the extra range means he might be able to stay back a bit.  Plenty of shield drones as well to keep the broadside alive, and finally the grav drone to try and keep stuff back a bit!

And then the ghostkeels infiltrating and being a nuisance of themselves. the extra range on the raker sound like a good way to keep them alive - with a 4++ and -2 to hit.

oh, if you're wondering why the firewarriors are 9 per unit, it's because of secondary points in ITC format tournaments.
Posted by Sorien at 12:30 AM No comments:

Sorry after finishing all my Dark Angels stuff, the hobby drive left me again.  I have done half my Kromlech Kommandos and not much else.  More to come, I promise!!
Posted by Sorien at 3:38 AM No comments: