I'm one step closer to finishing my Medusa Strike Force, with the completion of the 3rd tactical squad.

This is a grav unit that will be in a Rhino.

I even did up a grav pistol!  Might be a viable alternative to a combi-grav.  Not sure yet.

I only got in one pic before the camera batteries died, and I don't feel like waiting for them to recharge..so this is all you get! 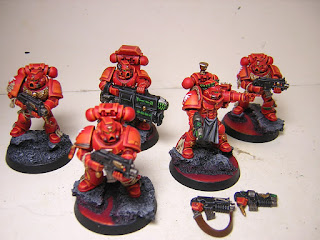 I have my command squad bikes built up and getting ready to prime them. I also have my new warband members to work on before next week.

All that's left to buy for my new list is another Stormtalon.  I don't know when I'll be able to get it.

Busy month, actually posted quite a bit. But tomorrow is Luke Cage so I'll be binging after work the next two days!

Posted by Sorien at 3:18 PM No comments:

I was so excited to play that I didn't remember to take even pictures, much less a video.

It was a pretty dense terrain board, with big buildings in the middle.

I did a split deployment with Kristianna and the archers on one side and Seoni and everyone else on the other. I got first turn.

First thing was to cast +2 fight on my Barbarian in a group activation. My thief moved up next to the first treasure token.  The apprentice cast Wizard's eye on the other side of the table.

I was playing against a witch that summoned up some companions and potions before the game. he also brought treasure closer with telekinesis.

Second turn I put speed on the barbarian, and tried a mind control through the wizard's eye with no luck.

He grabbed a couple treasures, and some wolves appeared near my archers.

Third turn was bad, with my uber barbarian downed with a single poison dart. Despite being Fight +11 with cover, he rolled a 19(+5) to my 22 and the roll was just enough to one-shot him! I was sad.

My thief made off with a treasure and the archers attempted to shoot the new monsters.

The game went on with me trying to glow, bow and mind control. He killed Kragmar with another poison dart. Even killed one of his own soldiers that was under mind control.

The end was 4 treasures to 2 his favor.  I ended up with 160xp, a Staff +1 fight for my wizard and a staff of casting I sold for 300 gold.  The barbarian is fine, but the thug will need to sit out next game.  For my level bonus I took a bonus to cast mind control.

However I have more then enough gold to fill out my warband. I'm thinking a man-at-arms or a knight..not sure yet.

I didn't really have much strategy coming into the game but now I definitely have a plan going forward.  The goal will be to cast wizard's eyes on the other side of the board and then hide the casters in the back, while my soldiers move up (hopefully) with fight and speed buffs.  My main offensive spell is easily mind control and with line-of-sight coming from the wizard's eyes I think I will be happy with the plan.

So now I need more models to finish off the warband, something for the wizard's eyes and treasure tokens. I will also at least have pictures next time!
Posted by Sorien at 10:24 PM No comments:

It's been a while since a new game grabbed my interested. I tried a bit with Warmachine with it not catching on. Friends keep recommending Malifaux or Infinity and neither one is showing the least bit of excitement.

However Frostgrave is the exact opposite.  I've watched some battle reports and played a demo game.  The ruleset is simple and the games are quick and brutal. I can see a lot of flaws in it, but it's fun enough that they are easily overlooked.

I'm hoping to get a game in every other week on Friday night. First chance is tomorrow so we'll see if that pans out.

Here is my starting warband, already done and ready to play!  They are Reaper Bones miniatures which means mold lines are just a fact of life. Other then that they are pretty nice. I spent less then a week on these, so don't expect much.

I was also able to get the basic rule book with my bonus Amazon gift cards from work, so right now the investment in this game is very minimal, so if it turns out I don't like it no big loss. 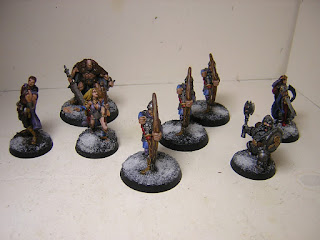 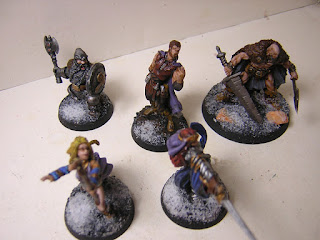 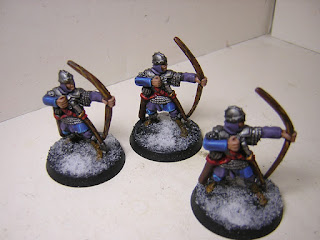 Seoni travels to Frostgrave with the singular purpose of increasing her power. Wealth does not mean much, but to her the power of magic is what drives her. She stands out in the wastes of the city with her blond hair and colorful flowing gowns. To the surprise of everyone that encounters her, the cold seems to not affect her in anyway, even walking around barefoot. You could say the cold does not bother her anyway..

Seoni considers herself true neutral. Her powers of foresight greatly influence this, as she sees the possible consequences of her actions before she commits to any single course. As a result she comes across to people as cold and emotionless, yet fair and loyal. It is this commitment to fairness that keeps her warband together.

Kristianna was a skilled warrior long before she met Seoni. She is a grand master with dual blades. Her natural magical abilities to see the future contribute to defeating otherwise more powerful foes, and came under Seoni’s tutelage for mutual benefit.

As a stark contrast to Seoni’s apparent emotionless, Kristianna is filled with wonder and embraces all that life has to give. She is constantly pulling pranks on the warband and fills every camp with laughter and music. Her warmth is nearly matched by her commitment to a moral code of kindness, empathy and justice.

Thund is mighty warrior that lives by the code of honor of his northern tribe. He is bound by blood to Kristianna, as she saved his life as he was beset by a horde of gnolls. Ever since then he has been by her side as aide and advisor, working together with a common goal.

Thund is a barbarian in every sense of the word: loud, hard drinking, strong, competitive and violent. However he interprets everything he sees through his code of honor. He has little respect for anyone that violates it and sometime even buts heads with Seoni herself.

Dub has joined the warband to become rich. He fancies a life of ease, and seeks an early retirement; preferably to his own island. He constantly talks about how he will build his grand manor with all sorts of hidden passages and traps to keep other thieves at bay. He is a skilled thief but assassination does not sit well with him. He is learning the art of dual wielding from Kristianna.

Dub is the typical anti-hero, a true rouge that usually ends up doing the right thing. To this end he isn’t as rich as one would suspect. Dub and Thund are best friends, and they always have each other’s back in a fight.

Kragmar pretty much keeps to himself. He sleeps and eats alone, and rebukes most attempts at conversation. As such not much is known about his past, except that he will work for whatever he can get.

Posted by Sorien at 5:50 PM No comments:

I had not realized that ITC now allows taking two CaDs.  I don't know when that changed, but it allows me try and build a dakka-heavy list.

The biggest roadblock was the fact that both lootas and mek guns are heavy support. Being able to run two cads gives me both ObSec and 6 heavy slots - which is exactly what I need.

I did have to fill out 4 troop slots, so I wanted both hitting power and speed. Mixing up large mobs with Trukk boys was the way to go.

The obvious way to protect the firebase is a Void Shield Generator, especially since ITC is still not using the draft faq's.

Lastly, only bringing 54 boys means I don't have a lot of models. So I decided to back up the boys with some summoned deamons!  Thus two wierdboys.

I don't have a lot of stuff to summon, only 10 pink horrors and 19 deamonettes, but that's enough to provide very good support and take pressure off the boyz.

This gives me a strong balance of assaulty, shooty and survivability. I probably can't deal with 4 gattling cannons but I'll give it a try!
Posted by Sorien at 10:39 PM No comments:

Finished putting my first Blood Angels tactical squad on 32mm bases. I still have not found any resin lava bases I like, so I might have to start learning how to do my own.

I have a lot more then 10 guys in this unit though, so it was more work then it needed to be. But have 4 heavy weapon options and 2 guys with special weapons.

32mm bases really makes a huge difference for space marines and it's well worth the work. Slowly over time I'm sure I'll get more and more done. 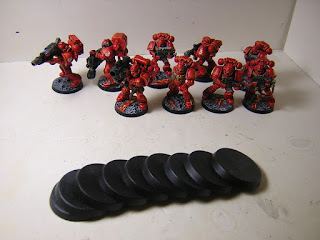 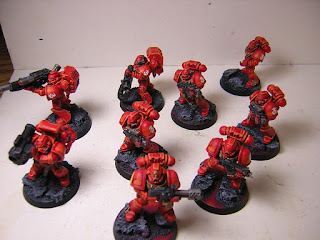 That's it for now, more hobby to come!

Posted by Sorien at 1:28 AM No comments:

Something new is in the wind..

Watch this spot!
Posted by Sorien at 12:23 AM No comments:

Another step to the Medusa Strike Force is done - the first Stormtalon.

Even if the BA supplement coming out is pretty good, I might still want to run a Raptor Wing because it's just pretty darn good.

It's also magnetized, and done differently then I've seen others do it. 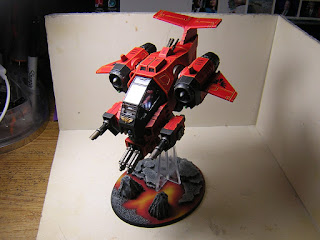 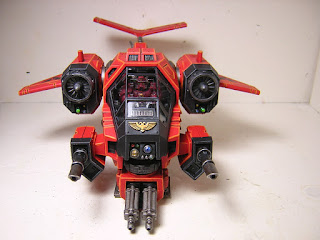 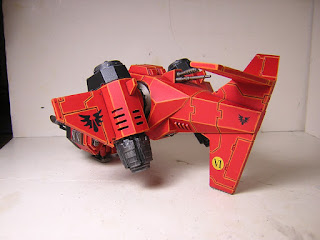 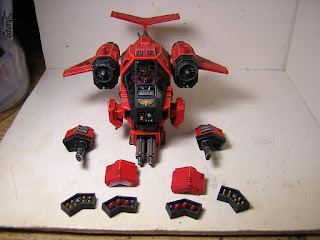 Turned out great, love it.  On to the next project!