So tonight I was working on my guard squad for charity, and a couple days ago I had decided to do a couple in non-caucasian skin. Well I forgot until I got to the last guy, so onto the mighty google I go, looking for a guide.

I spent about 20min looking for something, found a couple hints in threads and this one blog post:

But that's it.  I was pretty shocked this was not a more common subject.  I found a lot of people asking, and many links to an article on Coolminiornot ..that isn't there anymore.  Sigh.  I don't usually inject real life into my hobby time, but this is not a good thing to find out about our community.

I had to come up with my own. Used a base of Dark Flesh, washed with badab black. First highlight of dark flesh then mixed a little talaran flesh into the dark flesh for a final highlight. 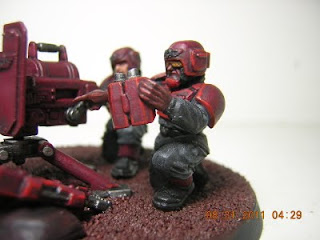 Anyone have some tips on non-Caucasian skin?
Posted by Sorien at 4:31 AM No comments:

This will be the 3rd year that the members of the 40k radio forums have painted, donated and auctioned off an army or armies to benefit the Toys for Tots organization.   Last year we raised over $2000 with 5 separate Ultramarines armies.  This year is all guard.  My donation is a full infantry squad and matching Chimera. 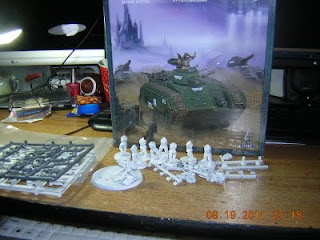 Started working on the infantry, following one of the 3 optional color schemes chosen by the members. This is the one I picked.  Sergent is just about done, looking good so far I think. 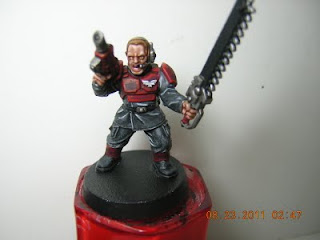 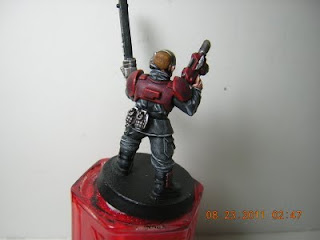 Posted by Sorien at 3:22 AM No comments: 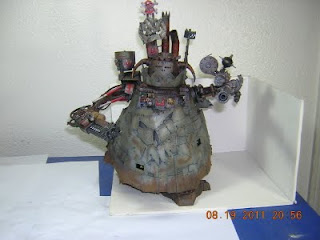 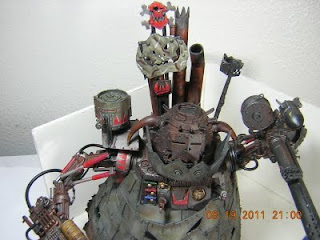 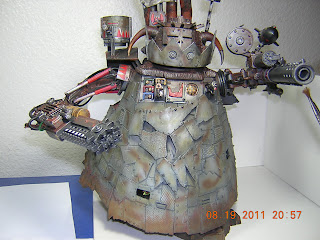 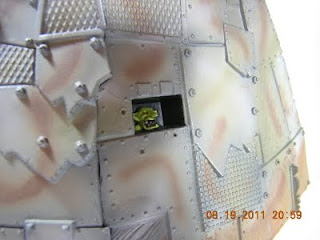 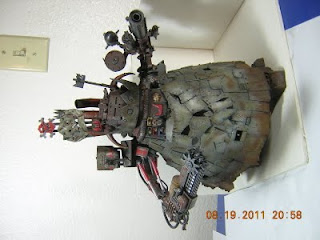 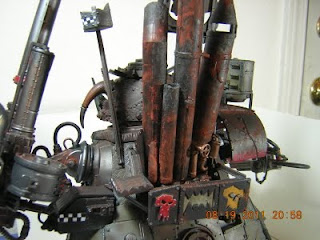 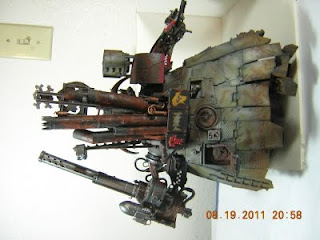 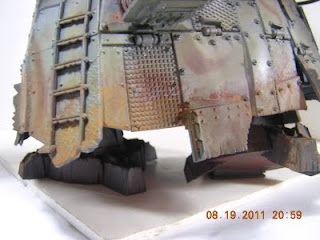 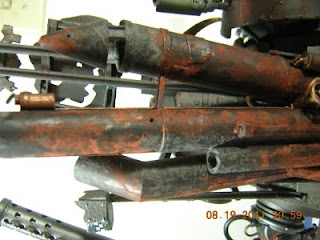 Posted by Sorien at 9:48 PM No comments:

Sometimes it's better to be lucky...

I wish I could credit some sort of tactical genius but no, I have to admit I got lucky at least once in every game.

Game 1: Failed morale test on Dante's unit after coming in. Rolled an 8 on 3d6 and barely stayed on the table.
Game 2: opponent failed 1 warpquake, which gave me the much needed opening to drop in my guys.
Game 3: In my fist turn of shooting, I blew up his vindicator, immobilized and took the cannon off his defiler, and immobilized the land raider with Abadon in it.
Game 4: In one turn of shooting, I took out 2 chimeras, the vendetta, one of the devildogs and took the cannon off the 2nd. In retaliation a manticore scored a penetrating hit on all my tanks, and I made all but one shield of sanguinius save.
Game 5: Not only blowing up a land raider with an assault cannon, but a couple times his vindicator was just out of range on key shots.

-Out of 5 games of at least 5 turns each, with 3 assault squads with meltaguns in razorbacks, I fired the meltaguns exactly 6 times.
Posted by Sorien at 12:13 PM No comments:

It was a great event, run very well. Thank you Jeremy!

Videos are coming.  I have the 2nd day bat reps to post, but that is it.

First video in the series:

OFCC day one in the bag!

One of the paint judges told me my army was in the top 5 at the event, which really made me happy.

Video soon, had a lot of brainfarts with the recording.
Posted by Sorien at 11:38 PM No comments:

Been working on the Stompa on and off.

I realized there is so much stuff on the body that I'm doing it in areas.  So far finished the front light area and the exhaust stacks.  Once I get to the pigmentation the stacks will get a lot more rust. 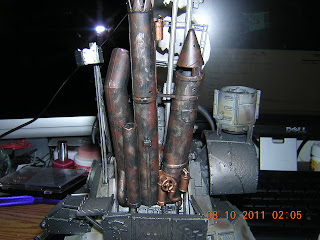 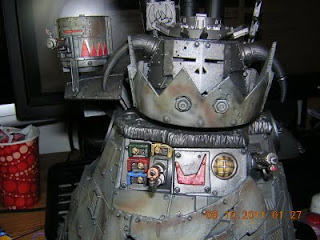 So far so good.

Well I have until Tuesday off, OFCC is this weekend!  Doing something last second which I didn't want to do, but I'm converting one of my HB razorback turrets to las-plas and changing my captain for Dante.

Posted by Sorien at 1:18 AM No comments:

After much deliberation thinking about different forms of battlewagon spam, I decided on a simple expansion of my 2k list.  I know it very well, and adding more of the same should work out fine. After filling out all the units I had a few points left over, so I added in some deffkoptas.  This will give me another harassing unit, and more potential anti-tank.  The low killpoints is sure to help out as well, since only 3 of them are any where close to easy to kill.

Lots of pics of Dante in progress: 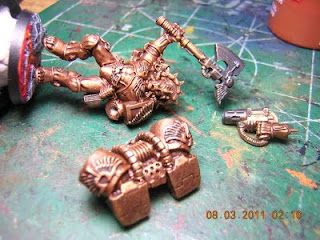 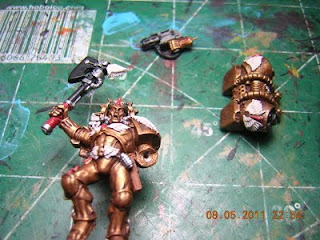 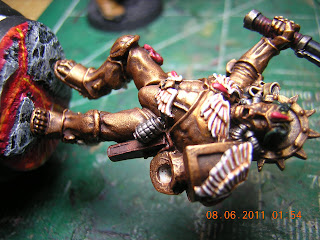 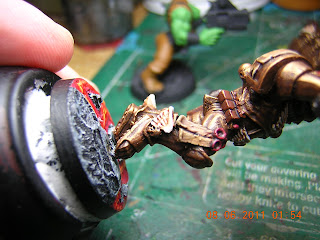 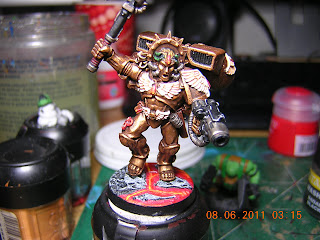 I also realized that I was short a Kommando!  Yes I had only ever built 14 assuming that Snikrot was required to fit in the unit size of 15..well the FAQ changed that so I needed another dude lol. 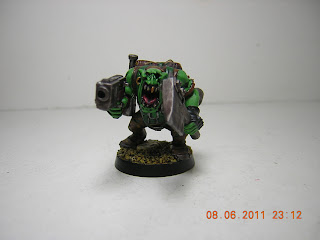 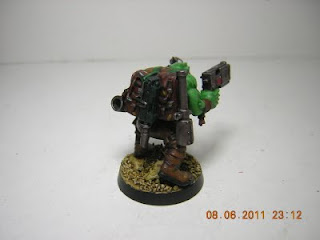 Backpack is made from a bit I pulled off an IG accessory sprue, I think it came with the hellhound I use as a looted wagon. Filled it with greenstuff then pressed it against his back so it fits perfectly.
Posted by Sorien at 1:36 AM No comments:

Been ramping up again. First I finished going over the 12 'ard boys that needed it.  They got mold lines cleaned up, repainted, washed and highlighted plus some pigments. Much better now.  I have only one unit left to tackle, the stormboys. 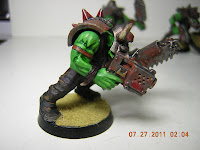 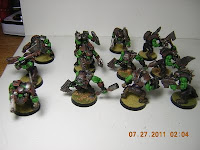 I also finished the stompa arms. I will be doing bits of the body slowly as I get bored with other projects. Eventually it will get done. 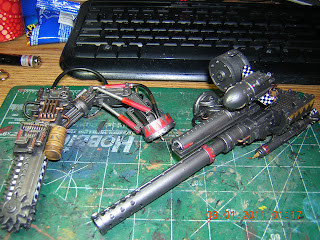 The only thing I have left to do for OFCC is re-basing several of my marines. Jumped into that today, and I'm almost finished.  Added more ballast to my Death Company as they are the metal ones and greenstuffed into the bases.  I didn't want to try cutting them off.  I then painted and pinned 8 assault marines to resin bases.  The only thing left is adding ballast to my Devastators just like I did the DC. 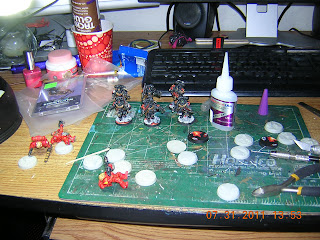 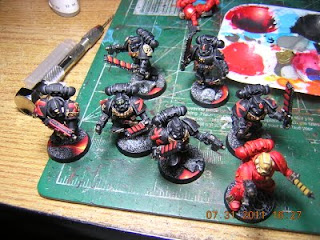 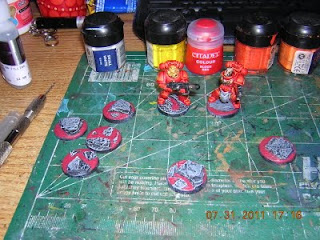 I
For my August challenge on the freebootaz forum, I will be doing my most recent purchase, a Finecast Dante. 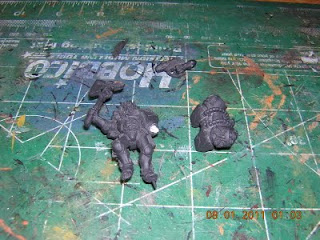