First time I heard this, I was screaming FUCK YA! Starblazers was a huge part of my childhood, and to this day the only anime I can stand watching..yes I'm an anime hater :)

I can't stop watching the trailer, especially the part where they fire the wave-motion gun. I'll be waiting for a subbed version, even if I have to get a shitty telesync, with baited breath.

At it's core Yamato is about what it really means to be human, where we look at the abyss and refuse to go without a fight. Battlestar Galactica is the same idea, probably why I like it just as much.
Posted by Sorien at 9:11 PM No comments:

Another crushing victory for the Tau. Everything worked exactly as I would have liked. I'm having a lot of fun playing the Farsight hammer unit, it is a huge fire magnet which gives my broadsides a chance to deal some pain. If only I could take more then one unit and Farsight at the same time.

Pathfinders have been amazing, the marker lights have helped so much killing the easy cover save or increasing my BS. I'm thinking about dropping the rail rifles though and just going with 6 markerlights.

The real tank killing champs though are the Broadsides. I love this unit, they are probably the best thing in the Tau codex given the state of 5th edition. I'd like to try dropping farsight and going 9 of them, but I only have 4 and no way am I spending money on Tau until the next codex.

So what was so good? First the plethora of gun drones sucking up battle cannon and meltagun hits. Second, every suit with a 4+ invul and full wound allocation is almost impossible to kill. Then I get to shoot every suit at a different target if I wish. Lastly if I get near anything short of high-end assault units, Farsight will cut you apart.

This was also the first time my firewarriors really did anything, using 2 marker lights to give them BS2 double-tapping at guardsmen out in the open. 2's to hit, 2's to kill. Loved it. 20 shots, 15 dead.

I have a make-up game to get in, plus 1 final game. Then the Tau go back on the shelf until the rumored summer '11 codex release.
Posted by Sorien at 1:52 AM No comments:

Kids were at a sleepover and I was able to get in a pair of games with my cousin and a pair of IoB boxes. The reference sheet made such a difference. We worked our way through it, don't think we made too many mistakes that effected the outcome...forgot about the ranks and steadfast, but with LD5 it isn't a big deal, and didn't know about the lance on the princes. Had a lot of fun though, and I'm getting pretty interested in playing fantasy a lot more.

Not too excited about building an entire new army all at once though lol, not to mention I need a whole lot more core infantry...40 skellies and 40 zombies just isn't going to cut it.
Posted by Sorien at 2:58 AM No comments:

It looks like GW actually listened and put up a reference sheet for Island of Blood. I plan on playing a 2nd game asap now that I have it.

All I have to say is good job GW! Ya, it should have been in the box but it's out and I'm happy about it.
Posted by Sorien at 10:36 PM No comments:

Quick review of Isle of Blood

My cousin and I broke out his IoB box today. I should note, neither one of us have ever played Fantasy before. We've read rules, watched instructional youtube videos (which were all 7th) but never actually played.

So after a tedious hour or two assembling the models, we wanted to try out a game with the stuff that came in the box.

And here is were we hit a wall.

There is no information in the IoB box that explains how to use the models in the box. There is no listing of wargear, there is no instructions for the engineer's pistol or weapons teams, and the stats in the back of the rulebook are incomplete. It was incredibly frustrating.

The only way we could actually play was load up army builder and generate armies and lists from what models were there. Still didn't get info on the pistol, though. If you know the rules, are playing either army, this box is amazing.

The models are great though, especially the griffon. I already have a sizable VC army to assemble, and would probably go with High elves if I was buying an army.

We did a few minor wargear changes (like giving the prince dragon armor). I went with lore of life on the HE mage, and rolled a 5...exactly what I wanted. Turned out to be the game changer too as my spearmen were being whittled down, but I raised 2 back up and the extra attacks turned a combat and I ran down a unit of clan rats. After that it was just a mop up.

I did enjoy it, but I am not clear on one thing. When declaring a charge, we assumed because of the free 90 degree wheel you can declare against anything within that 180 degree arc. I'm not sure that is correct.

Anyway overall ratings:
Contents: 5 stars
As a standalone starter game: 1 star.
Posted by Sorien at 1:15 AM No comments: 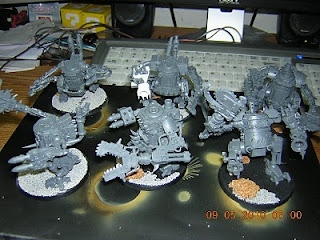 Finished building and basing my kans. Gotta say this is a great kit by GW, probably the easiest and best one of theirs I've ever worked on. Very low cleanup, very dynamically posable, great looking mini's, and a good value on top of it all.

Put together a preliminary Kan Wall list. The idea is simple. Line up 9 kans in front of a horde, advance forward under supporting fire from lootas. I would like to fit in Snikrot, but that means fewer scoring models.