Well here it is the first newly painted Orcs and Goblins model in the better part of 3 years.  Icy Orcs Grimgore Ironhide.   Really enjoyed painting it. Used some blue tint on the dead skin to make it look dead and lots of Blood for the Blood God. 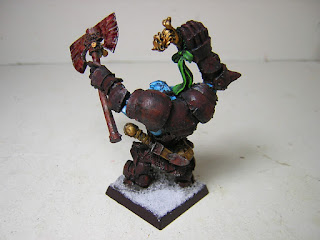 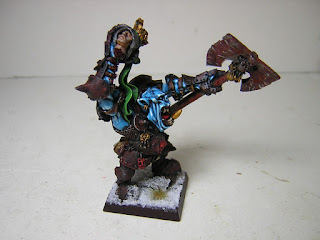 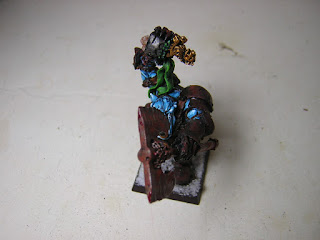 Working on spider riders.  Hopefully I'll be able to afford some new 40k models soon.
Posted by Sorien at 11:48 PM No comments:

Yes, it's been a while since I did my last models but I finally finished my next (reluctant) project, my custom Sammael model.  I didn't really want to start this guy until I had at least some bikes to go with him, but I really didn't have anything else to do!

The real Sammael model is like $50, finecast and really old. Didn't want to invest that much on something that really wasn't a priority.  But I found this resin bike on ebay for $20 and it's designed for GW miniatures so I gave it a try.

Not only is the model a perfect fit for a GW rider, it just looks amazing.

I didn't quite get the feathers the way I wanted, but doing better would have required a dunk and repaint, and I wasn't up for that at all. It's good enough.

Other then that I'm pretty darn happy with how it came out. 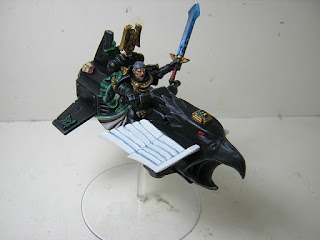 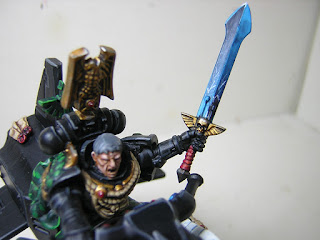 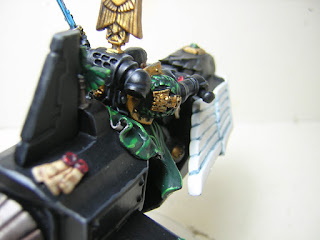 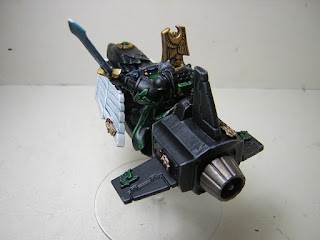 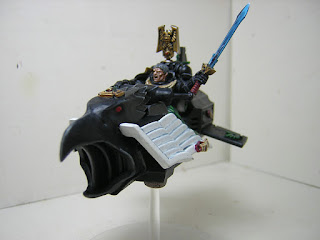 Posted by Sorien at 2:32 AM No comments:

So I finally played a game of AoS, my Orcs vs Gorn Lizardmen Seraphon.  It was a heck of a lot of fun, and I really enjoyed it...despite obvious balance issues.

So after just one game I already have some thoughts. That's the nice thing about a simple ruleset, it does not take long to get a grasp on it.

1. The roll each turn to see who goes first can be rough, especially on turn 2.  however I think if you know that your opponent might get 2 turns in a row, you can plan for that more easily. I didn't know it, so I was super aggressive and it cost me.

2. There is no unit balance. Sure you can play with a framework, like limiting wounds per unit, duplicates, etc but it does not help because some units are simply better then others.  There are comp systems out there, I'll have to look into it..

3. Shooting into/out of combat.  There is no rule that says you can't, but we played it like it does.   I think that really helped especially since I was facing some really potent shooting.

4. A game of remembering!  So many rules in each warscroll that it takes time to remember everything you can do.

5.  Monsters. I *love* how monsters get weaker as they take wounds. It's a great mechanic I've wanted in 40k for a long time.

6. Multiple combats.  I think this is where the game really shines.  Because you do not resolve each combat separately, but pick units to attack in turn and then resolve the results after everyone is done. This means when involved in multiple combats you can only be sure of having the advantage when it's your turn and then only in the first unit you pick.  You're opponent can pick any other unit involved in other combats, giving him the advantage in that one. It's bloody brilliant if you ask me and ads so much challenge to the game.

I don't know if or when I'll pick it up again, especially how much better the Seraphon are then my O&G, and I don't have another army to play. My cousin does, tomb kings, but that has plenty of broken stuff in it as well..

Anyway that's it for now.
Posted by Sorien at 2:07 AM No comments:

Sorry I only had 1 post in November.  For most of the month between recovering from hernia surgery and still getting use to my new diet, I didn't have much energy.

I did get a couple things done though. First was the promethium relay pipes. More of a "repaired" look then a real "looted" look, I went with lots of corrosion, pigments, etc.

Pretty happy with it, even if I don't have any plans to use it in a game. 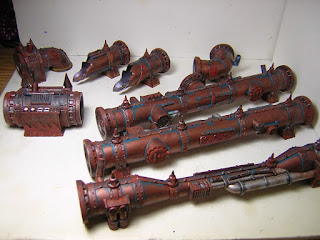 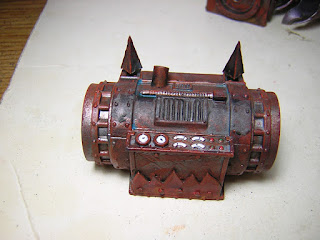 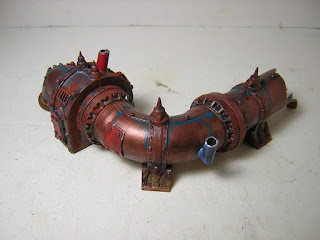 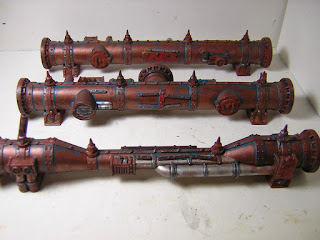 I also modified one of my unused Nob bikers for use as a mek with KFF and Big Bosspole for the modified warbike-star. 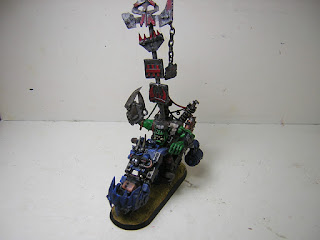 Both the pole and KFF are magnetized.

so that's about it for now, I am really running low on things to work on so I'm not sure what's next.

Posted by Sorien at 8:03 PM No comments: