Slowing down a lot, but soon to speed up again.

I have not done much since OFCC. I've been killing myself for the last year to get the army done. Now that the event is over, I'm able to better pace myself.

Since OFCC ended, I have finished my 3 FW nob bikers. After that I took 2 of my other nob bikers (which were used as biker leaders) and did some more work on the paint. I took them from a basecoat to washed and highlighted, and based. Now I have a full 5 nob bikers ready to go.

However it may be a while before I actually play them. Next month I plan on playing Tau simply because I haven't in a very long time.

So what's in the pipeline? Well first, I have prepped and primed 8 more boys for my latest shoota boy squad, 7 shootas and 1 rokkit. I might actually do some big shootas for them as well, but I doubt it, and at least I'll finish up the 30 first.

Second, is a land speeder I am doing for a charity army through the 40k radio forums. It's going to be Ultramarines which is super easy to paint. Easier then Necrons.

I also have pulled out my Mephiston model and threatened to paint that. But so far, it's only a threat.

Even though I only took 2nd last month, it was still enough to get another box of kans. I now have 2 unopened boxes so I can max out.

I have to pull out 5 more bikers and get them set up and ready to join the nob squad.

Finally, I want to do a few airbrush videos and I have my ME262 for that. It's practice as I plan on doing both the speeder and the kans with the airbrush. 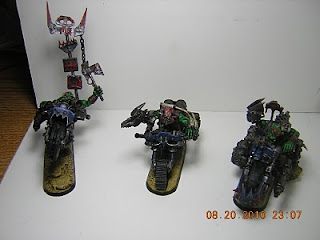 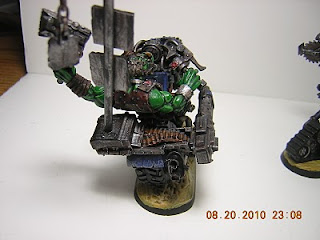 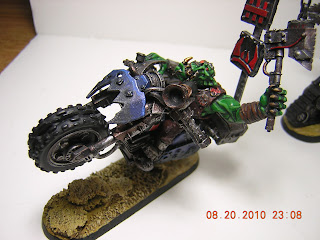 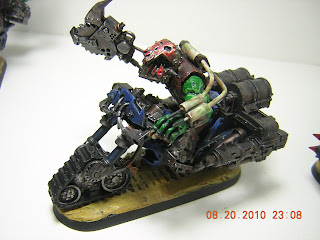 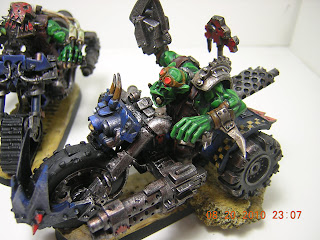 So OFCC is over. I took my Blood Angels to a 4-1 record. Overall the team went 11-7-2, combined with paint and sportsmanship scores earned us a 7th or 8th (don't have final results yet) overall and 3rd best general. Not a bad showing, considering I was the only one who had been to a single previous OFCC. I was told by several people I had one of the top painted armies at the event, which made be very, very happy. To be honest, while there were many well painted armies, but many were just at minimum standard.

First thing to remember is that OFCC isn't about beating the crap out of people. Sportsmanship scores count equally to battle points..40% battle, 40% sportsmanship and 20% painting. Given that, I didn't do very well. I won my games, and by a wide margin. I either did, or came very close to, table in all 4 games I won. I'll talk more about the game I lost later.

First thing I noticed, is that my dreadnoughts were complete wrecking machines. Those 2 models carried a lot of the load. The second game, I played an infantry-heavy IG list with only 4 tanks and a lot of special weapons. The dreads were completely overpowered against that list. The last game, against 'nids, those 2 models would have walked all over everything if not for weapon destroyed results taking out a talon on each. even without that, they still won me the game. In that 5th game, both my tactical squad and my rhino assault squad did *nothing* the whole game.

Next, was my jump pack assault squad. This unit is just awesome. Fast, lots of hitting power, lots of resiliency, psychic defense, it's got it all. Not a true hammer unit, but still very good at what it does. 3 melta + blood lance is a lot of firepower as well.

Let's talk about Baals. These, as well, were quite effective especially against infantry. They even killed a couple vehicles, including a chaos dread in game 1. Making lootas run in game 4 was huge, as well as killing Zoanthropes in game 5.

Now the other effective unit was my Death Company, again smashing infantry like crazy. They even added the final punch that killed the Nob Bikers in game 4. I was never once disappointed with either their effectiveness or durability. They killed a lot of 'nids, that's for sure. Overpriced? Maybe, but they don't suck as much as everyone thinks they do. Rage was pretty much a non-factor the entire weekend.

II did not field a super competitive list by any stretch of the imagination..I mean who runs Blood Angels tactical squads? It was a decent, strong list without being over the top.

So recently I picked up a new phone plan and a new phone, Blackberry Curve. It was free. I never thought I'd have any need for a smartphone but I've found it not only useful but almost indispensable. Just having all my emails go to one spot, with me at all times, has been fantastic.

I've never really been into podcasts because I havn't had the time or opportunity to listen to any. The BB has changed that. With a cool app that manages podcast I've now filled 2gb+ of 40k and atheism podcasts. Mostly 40k. 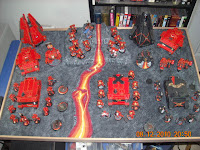 After doing touchups and adding infernus pistols to my priests, the army is done and ready to play this weekend. 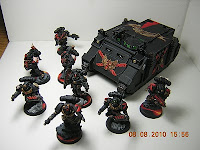 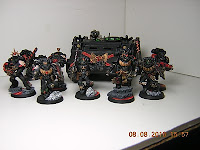 Posted by Sorien at 4:01 PM No comments: 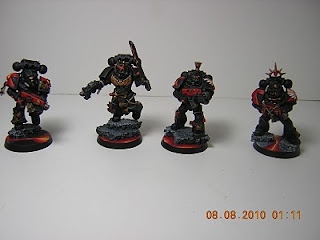 I literally had to force myself to paint my last 4 death company today, but I got them done. Just need to clear coat and they will be ready. Last night I built the frame for my display board, so all that is left is gluing magnets to the bases of my infantry.
Posted by Sorien at 1:09 AM No comments: 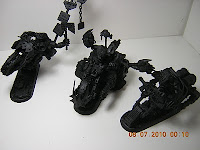 Finished building the bikers, made bases and got them primed. Now I have to finish my Death Company before I start in on these.
Posted by Sorien at 12:51 AM No comments:

A smashing return for the Orks! 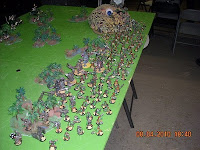 Or, how to play with more bodies then your opponent has bullets.

I came up with what I consider a "wacky" list and I really wanted to play it. I got paired up first week in August against Jesse, who I've played plenty of times before with his green marines.

It was a slaughter. I lost my lobbas, one dread, 18 shootas, half my grots, and about 10 other models total. He was left with an immobilized speeder, 4 marines, and a predator that was about to get ripped open by a Dread.

On top of that, I completely forgot I had buggies in the list and they never even made it out of the bag..so I played 100pts down.

I did learn a couple things. First, it's way to easy to bottleneck myself with a list like this. First thing I did was move my grot wall that got deployed in terrain..a 1 and a 3. Really put a damper on moving up other things. Second, trying to keep the walkers in effective positions and in range of the KFF isn't easy. Last, putting 8 lootas with the SAG mek was a stroke of brilliance, if I do say so myself. And I do :)

So next week I'll either be playing IG, Blood Angels or 'nids. I really want to play 'nids or BA, because I have yet to do either with my Orks.
Posted by Sorien at 2:24 AM No comments:

Almost finished building my Forgeworld nob bikers. One Slugga/choppa with waggh! banner, one with PK and bosspole.. 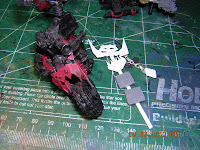 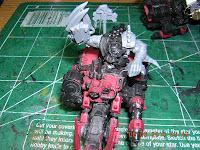 And one painboy! I LOVE how this guy came out! 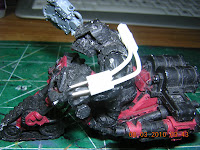 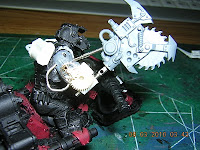 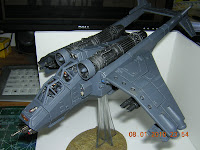 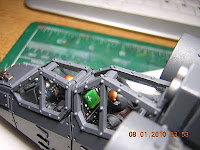 Had a busy weekend, pushed and finished the Vendetta. The kids and mom went to the beach Friday night so that gave me some time to get it done. Yay. One major job out of the way.

Taking a break from painting for a few days, then this upcoming weekend I'll push and finish the Death Company. I also need to get down and finish building the Nob bikers.

I also picked up my first non-40k kit in at least 15 years, a ME-262. Got it to practice and work with the airbrush more then anything, but it will be a nice diversion from GW stuff. 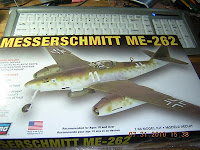