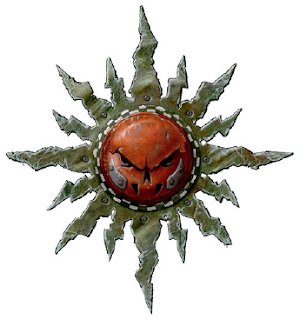 Ya I've been way out of the loop for months. Not being able to play at all due to the pandemic has killed my enthusiasm for the hobby.  Plus building and painting an entire 3k army lol.

So now the local club is opening again, slowly with limited capacity, so I might be able to get a game in now and then.  So it's time to list it up!

My first list is all about models I want to play over anything competitive.   I was thinking about squeezing the the Warkopter but that might be a bit too much.  Maybe next time. Plus it's 40pts more than a Trukk.

The main thing to play is the warbikes. Yes I know they are overpriced and underpowered, but they look fantastic! lol.


That is using 5 CP from the start, and I could easily use more (Klever Spanner, squig hide tires).

I originally had 6 smasha gunz, but decided on the dakkajet instead..for fun!

Anyway I'll be playing on the first at the lastest and hopefully sooner.  cya!

Posted by Sorien at 7:08 PM No comments: