Taking the Ork Decurion to an ITC one-day

So I pulled out the Decurion again, making a few slight changes to upgrade the KFF to the Mega Force field.  This time it was a 30min drive out to Sherwood, Oregon's Glimpses of Wonder & Warfare.  It had enough room for the 16 players and some X-Wing going on.

Anyway on to the games:

Same list I played against at the last event, and ended up tabling him (other then drop pods).  Talking about what he should have different was detrimental to me this time, as he surrounded me with drop pods and guys, de-meching as much as possible.  I was pinned in against the pods and could not get the assaults I wanted.  Ghazzy never got to his wolf star this time, and the Knight killed a few grots and not much else, but lived.  Result: 1-10 loss. 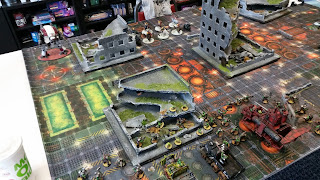 Not quite a tournment-level list with 2 flyers, a bunch of scatter bikes but onlly 5 warp spiders, Wraitguard with d-cannons and fire dragons.  He gave me first turn which I used to run full bore at the pansies!  The fire dragons blew up the battlewagon, and the Knight stomped the meganobz and most of the Council but Ghazzy lived and harassed units one by one. I kept a few units back to defend against spiders and turbo-boosting bikes.   There wasn't much left at the end but I pulled out a 6-5 victory. 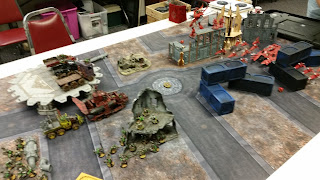 Ah the two red-headed stepchildren of 7th going head to head.  Ariman with 2 units of thousand sons, terminators, a formation with the forgefiend, maulerfiend, and dark tech marine guy, demon prince and helldrake.   He let me go first again, resulting in me heading right up the middle..as it's the only thing the decurion can do!  The battlewagon was destroyed but Ghazzy extracted his revenge on the maulerfiend while the Meganobz make short work of the forgefiend. Then it got interesting.  The meganobz got bogged down by the terminators and a ton of 4+ invul saves, the boys died in droves mostly to exploding trukks and doom bolt's 2d6 explosion range, and the demon prince casting enfeeble and gift of contagion on the council stranding them in the middle of the board not able to run and get into combat. Once the prince went down, I was able to come back somewhat but being killpoints means I was fighting an uphill battle from the start.  Result was a nice and clean 5-5 tie. 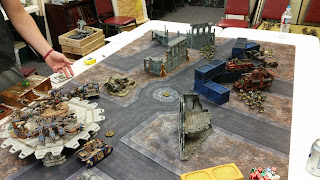 So another day and another mediocre showing for the Decurion with a staggering 1-1-1 record.

What can I say?  the Council with it's ability to run and change isn't a small threat for anywhere on the table, and even jetbikes had problems staying way (if they wanted to shoot) but the rest of the army is just so incredibly fragile without much overall killing power.

I think I might be putting away the Decurion for a while. It's incredibly boring to play with a very unexciting and monolithic style.
Posted by Sorien at 12:12 AM No comments:

So I thought about it a while and decided to try a slightly different version:

This makes the nob bikers a better unit by far, primarily with skilled rider. Also his I4 power fist isn't much to laugh at either.  I do wish I had the painboy in with the 30 'ard boys but the lucky stick makes up for it quite a bit.

Should be a fun list to play, if nothing else!

Ork formations - thinking outside the box

If you remember the old Stormreach box that introduced Grukk Face-Rippa, it has a formation to allow you to play all the models in the box. It's called "Grukk's Rippin' Krew".  It's actually not bad at all. It allows the entire formation to deep strike turn one!  And if you add it all up it's only 525 points. Plenty of room left for other models.

Now, move on to the Start Collecting Orks! box, and it's formation the Painmob. Again, this is designed to Allow you to use the models in the box.  It's ability is pretty good too, once per game the formation gets a free round of close combat attacks.  It consists of nobs, boys and a dreadnought (Deff dred is still a stupid name).  While the box has 5 regular nobs and 10 boys..there is no limit. So how about nob bikers, a full unit of 30 boys, and a bike for the painboy?!?

That gives some points left over, so throw in a CaD as well.   All nice and ITC legal.

After kunchin' the numbers, here is what I came up with:

I could go with Zhadsnark and bikes for troops, but I've grown a bit fond of Trukkboyz playing the decurion.

So I deploy the painmob and Cad, and then Grukk's stuff comes in turn one. I'll probably keep Grukk back to join up the unit of 30 boys, grots deepstrike onto an objective and the kans and nobs get right in someone's face for distractions.

Nob bikers are a sizable investment, and I think underpowered for the points, but that T5 is hard to pass up over T4 and a battlewagon.

Let me know what you think.
Posted by Sorien at 11:22 PM No comments:

Taking the Ork Decurion to an ITC event

Over the weekend I took my Ork list to a two-day 5 game ITC event.  Taking a look at the meta I think this is really the only viable way to play Orks in this kind of very competitive environment. 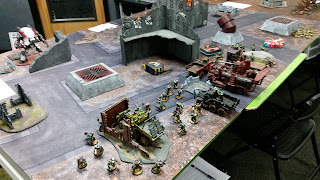 I went 2nd, and he pushed right for me.  The drop pods (8 of them) came in on objectives and stayed back.  My first turn the Council smashed into the Wolf Star and only took a few combat phases to kill them all - but did only leave Ghazzy alive and the Manz and MAWarboss exploded the Knight in short order.  11-0 win for the Orks! 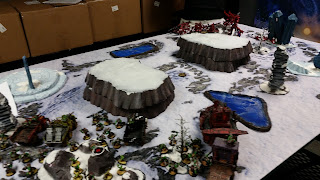 This is the killpoints mission and with 16 very fragile killpoints vs massive S6 and S7 shooting I didn't think I had much of a chance. I did push up with the council but also left a lot of stuff back to deal with 25 deep striking Warpspiders and a unit of Swooping Hawks. I did kill a LOT including most of the warp spiders.  In the end I only had Ghazzy and the Lucky Stick boss left.  0-10 loss. 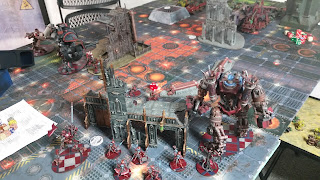 I played this exact list less then a month ago and tabled him. I was well on the way to duplicate the result until the council got stomped out on 6's.  1-11 loss. 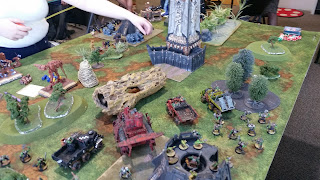 This army comes in turn 1, so I decided to go first anyway (for fearless) and wait.  Everything came right at me. Then it all died. I should have gotten the Council out sooner then I did.  10-2 win for the Orks. 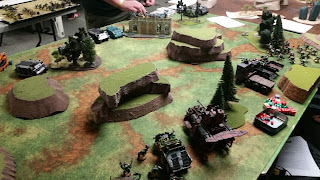 Another player and list I've played recently, and won that one on a very close 6-5.  He learned from that game and played much better.  I had to keep somethings back to defend my objective so I didn't have enough to push him off his.  In the end it was his Objective Secured that swayed the game in a 4-8 loss.

So that was a 2-3 record and didn't even score best Ork as the other Ork player using the Big Mek Stompa went 3-2.  That may be something I'll try in the future..at least you can get obsec that way.

Here are some things I learned over the last 9 games with this list:

1. The Mega Armor Warboss with Lucky Stikk is broken, even under ITC rules.  This guy has tanked literally 100's of wounds and only died to a S10 Thunderwolf and a Stomp.

2. The Council is an amazing death star.  It just wipes away everything it touches.  The super high WS takes a lot of people by surprise.  Ghazzy's extra warlord traits can also be a factor.  However the problem is it can only reach out and touch so many things in a game...

3. Lacking ObSec is a bigger deal in ITC then some people make out.  I lost the last game literally on this rule alone.

4. MSU is hard for this list to deal with.  My stuff dies too quickly to really be able to move from unit to unit (especially things like 5+ Rhinos or Drop Pods).

It was a great event and I had fun for sure (other then that stomp..sigh).
Posted by Sorien at 12:08 PM No comments:

After a few games I've made some minor changes to my list. Dropping the 2nd battlewagon for a dedicated Trukk for the Meganobz.  This also gave me points for a few other models.