Since the Dark Angels codex was released I've been working on what I had.  I had 20 infantry built from before 8th when I was making a Lion's Blade.  10 tacticals, 5 assault and 5 devs with a grav cannon.

Well I changed things around, making the devs 2x lascannon instead and the Assault marines became plasma vets.

I also ended up with a couple of the easy to build intercessors, and after a DA upgrade and carving off the shoulder pads, they were built.

Lastly I got a land speeder and combined with bits from the Ravenwing Command box ended up with a talonmaster. 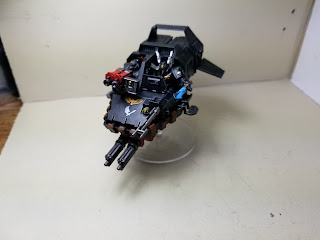 So now I have enough models to field a list I want to try. I do plan on adding a Darkshroud as soon as I can afford it, as well as maybe some Hellblasters.

So it's pretty simple. Azrael and the Lt sits back with the devs and missile launcher, giving everyone a 4++ and re-rolls, while the ravenwing exploit speed of the raven and weapons from the dark age to kill just about anything.

I haven't won yet, but I've had a lot of fun with extreme amount of plasma damage.  I just have to be careful about where the black knights are so they aren't charged too easily.
Posted by Sorien at 11:40 PM No comments:

Green Tide is a popular way to play Orks under 8th edition, and I can't disagree with the effectiveness.  Now there are a lot of pros and cons to the list.

First, let's start with what I've been playing:

1999pts, 123 PL, 9 command points
The plan seems obvious.  Boys sit under the KFF/Painboy and then move forward with the option of jumping to back up the kommandos.  Killing that many models is a problem for most, but not all armies.

So far my toughest matchup was Mortarian, which in CC can pretty much guarantee 17-18 dead boys a turn (18 attacks, hitting and wounding on 2+, both with re-roll 1s) plus auto mortal wounds and debuffs.

The question of taking out big models.  Sure, 100+ attacks sounds good but when wounding on 6's there is a limit.  The KMK seems the best way so I might change out the lobbas for more of them.  Or drop the rokkets in the boys mobs and lobbas for a unit of tankbustas hiding in the mob. But that kind of tweaking is also a matter of personal preference.

The biggest problem with this list is the number of drops. Almost always guaranteed to go second, which in 8th is a problem.  The 2nd biggest problem only applies to ITC, where the list seems to actively try to give up points to my opponent with 7 units of 10+ models and 9 characters!

I would also like to add another unit of kommandos for mob up purposes, a unit of 25 with a snikrot buff and jumping the banner (maybe a 2nd banner?) for a lot of goodness.

Anyway, what tweaks to be made?
Posted by Sorien at 11:53 PM No comments:

One of the new units in the DA codex is the Ravenwing Talonmaster.

It gives re-rolls of 1 to wound to ravenwing units, has a power sword (and thus can get the relic) and has a ton of shooting. Not a bad unit. 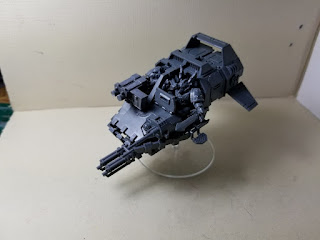 I had the twin weapons from a ravenwing sprue and the rest is from the Ravenwing command box. Very easy yet rewarding conversion!

Still working on DA, will get to the Kommandos soon.
Posted by Sorien at 8:53 AM No comments:

Continuing to work on my DA a bit, starting with a Master. 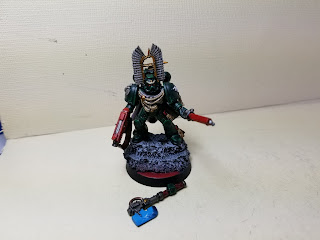 Magnetized for a chainsword and power axe.  The axe is pretty cheap so I'll probably use that more often than not.  The idea is to have a master, lieutenant and 8 vets with plasma in a drop pod...for when something just has to die.

I have 5 vets mostly done, but I lost my decals - a giant bag of them - so I can't quite finish them and it's very annoying. I don't want to have to spend money on replacement decal sheets!!!

I'm still not gung-ho about starting the kommandos but soon. I just want to finish all the DA stuff I have first.  I have the vets done except for one decal and varnish, and a unit of Devastators with 2 Lascannons are well on their way.

Posted by Sorien at 2:41 AM No comments: