I volunteered to paint a pair of the Imperial Defense Emplacement kits for my FLGS.

It's a simple kit in 8 parts that still has a lot of detail.

The downside, like all the Wall of Martyr kits, is the martyrs themselves. The bodies and gear scattered around the front. I covered all of that up with simple spackle, giving a good rocky look.

A quick and easy paintjob with lots of drybrushing, washes and sponges gives the kit a pretty good look. 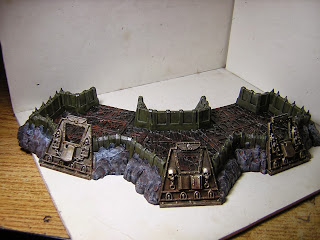 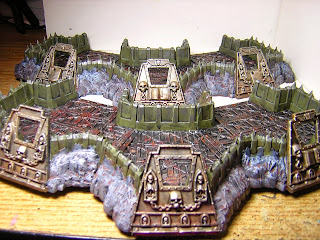 It's the perfect size for GW infantry models, as shown with some firewarriors. Clear line of sight but still good cover.  The kit is modular, so you can arrange it in a variates of ways and of course, it's all compatible with all the other Wall of Martyrs kits. 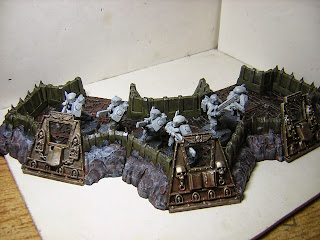 Overall the kit looks great, is quick and easy to assemble and paint, and will work great in game for decent cover. Get enough Wall of Martyrs kits and you can even use as an aegis!

Clocking in at under $30, not a bad value overall.

Finished off the Nurgle commission with the Lord.

Not feeling much on commentary, just pics! 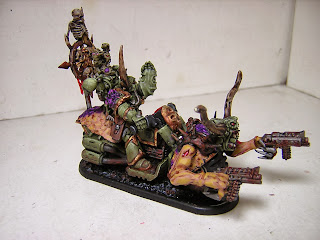 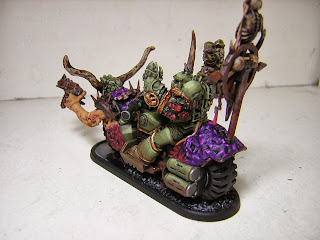 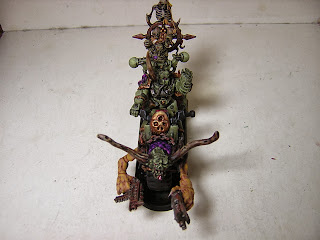 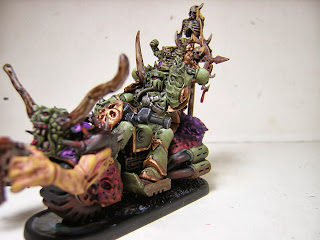 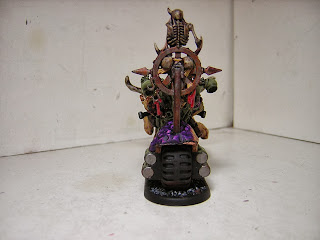 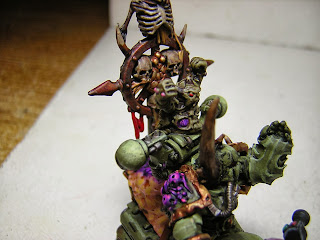 Posted by Sorien at 4:40 PM No comments:

After the first two test models, I was commissioned for 8 more.

First 7 are done, 2 powerfist champions, 3 plasma gunners and 2 regular guys.  I didn't do any of the conversion work, but I have to say it's excellent.

Not much to say, other then I went away from the bright green..didn't like that too much. Also changing from Bubonic Brown to Zamesi Desert on the flesh looks so much better. 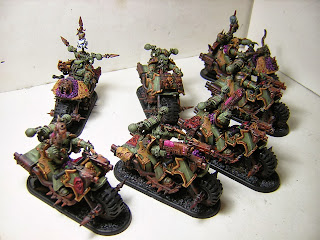 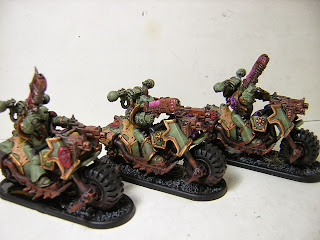 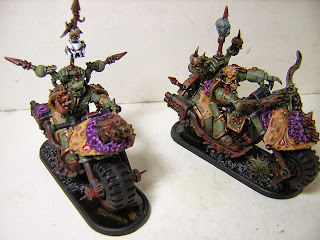 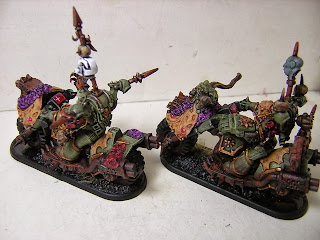 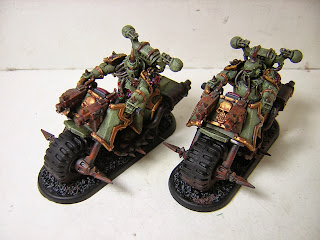 And lastly, the Chaos Lord bike WiP. LOVE the conversion.. 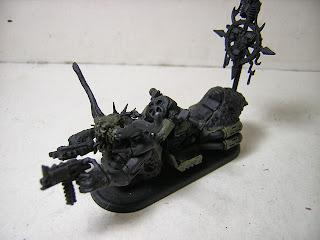 Posted by Sorien at 9:52 PM No comments:

I have not been posting much lately, as all my time is taken up with commissions and job searches.  I will be posting pics of 7 more Nurgle bikes in the next few days, all that's left on them is basing.

But anyway, I'm here to discuss the latest incarnation of my Tau and Space Wolves army list made for a tournament next month, The Guardian Cup.

I've played 3 games so far with this list, and I have to say I'm pretty darn happy with it.  The only thing is two of those games have had a Land Raider in it, and I really don't have a lot to deal with that in this list, but I don't want to add in Fusion Blasters anywhere either..so I guess I'll have to live with the Thunderwolf Lord and the two meltaguns.

Probably the first thing that sticks out is the Ethereal.  He really is the lynchpin of the Tau, as the bubble of LD10 and whatever element I use are almost required to make the detachment effective.  Zephyr's Grace is probably the most powerful of the 4, basically giving the Tau the equivalent of Battle Focus. Sure they are snapshots but with markerlights..who cares.  Plus being able to move, run, shoot and then jet pack means the suits are fast and still effective!  However this means I'm also much more hesitant to deep strike the crisis suits..after all they are my scoring units.  And if I keep everything together I have a better chance at a decent amount of supporting fire should something get close.

The Thunderwolves are great fun, for sure.  I always send them strait into the thick of things, as they are a great disruption unit. As one of my opponents said, he had to turn his whole army to deal with 3 models..and that really isn't an exaggeration.  If there is a piece of LoS blocking terrain in the middle, even better as they can hide the first turn and then run up right into my opponent's backfield.  The Wolf Lord isn't afraid of anything..swarmlord, wraithknights, blood thirster, etc, etc. Challenge? Sure go for it. The only time he has really failed is when going toe-to-toe with Abbadon.  After rolling a 1 with the demon weapon he still got 2 wounds..with two wounds left.  Roll stormshield saves...a pair of 2's. Great.  Well Abby was then out in the open and sucked 12 BS6 plasma gun shots the next turn..hehe.

For the Rune Priest, I keep thinking about taking Njal instead. The primary purpose of the Priest is of course, the runic weapon.  The 4+ no you don't get Iron Arm is absolutely fantastic against Demons (especially FMC's) and Njal is only better at doing that. Plus the extra storm table thing is just icing on the cake. But at 130 points more it's hard to make room.

Since my army likes to keep things at a distance, I've decided to discourage the deep striking and outflanking that could really ruin my day with a whole crapton of interceptor.  One game, 5 Chaos Terminators deep struck right in my backfield, only to perish before getting a single shot off after two broadsides and 24 burst cannon shots.  Just having the interceptor can alter the way an opponent plays..especially flyers. Sure I don't have skyfire on the interceptor but I can put out enough shots to knock down most flyers..and even more so if I roll Echos of the Grandmaster on the warlord table and take Tank Hunter.

The biggest problem with the list is it is only medium range, with most of my shooting 36", and the most powerful shooting only 18-24".  Zephyr can mitigate that some, and I have the marker drones on the short range suits so they can at least do something if their guns are out of range. Plus having the drones means that grav guns wound those units on 4+ instead of 3+..hey it's something.  I found this especially problematic with the Hammer and Anvil deployment.  In the future I will need to be more aggressive with deployment and consider deep striking suits in that situation.

Right now, deployment is my weakest link in playing the list..making sure my bubble is effective, dealing with reserves and mostly having better anticipation of ranges.

So that just about closes out my thoughts on the list.  I have 1 battle report with the list up, and another ready for editing. Comments welcome as always.
Posted by Sorien at 4:03 AM No comments:

Wow did this guy come out great!  The jump pack engines are nice and rusty and one is connected by a nice and fleshy bit. The skin looks putrid, the armor dirty and everything else is just..gross!

The best part he didn't take long to paint at all, which was really surprising to me.  I thought I would be toughing this guy out for a while, but easily finished him in a day even with distractions such as picking kids up from school, cooking dinner and a football game.

Just hit him with varnish and pigments this morning to top it off, and good to go! 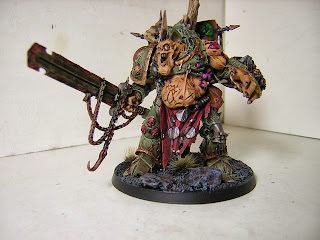 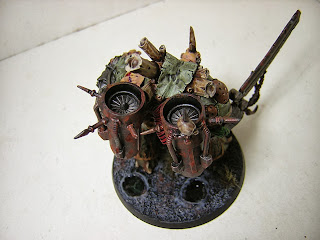 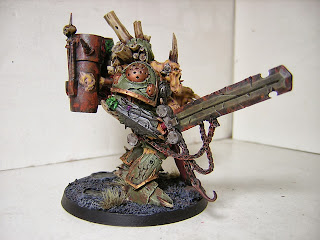 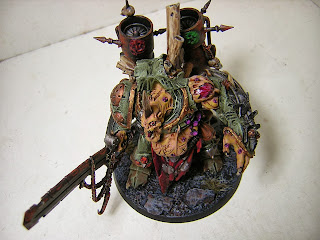 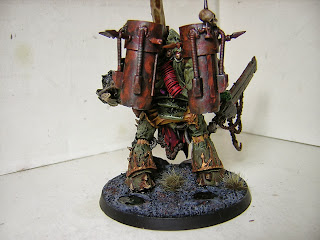 Posted by Sorien at 2:43 PM No comments: