More commission work, in this case a finecast nurgle demon prince. The customer wanted it "winged" but with a jump pack instead.  A few plastic tubes and the jets from the Valkyrie wingtip engines later, this is what I came up with.  I really like how it came out. Just a bit of greenstuff work to do before it's ready to paint.

Enjoy the pics!  As always, comments are encouraged.. 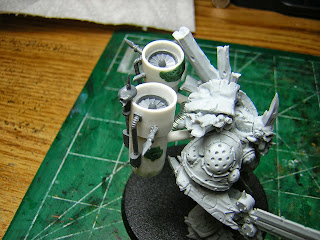 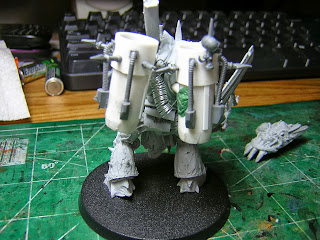 After a big push I finished all 9 bikes last night and hit them with varnish today.  Pretty happy with the progress I've made on my commissions. The only thing is I'm not getting very far with the Space Wolves but hey, I need the cash! 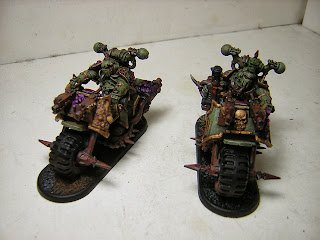 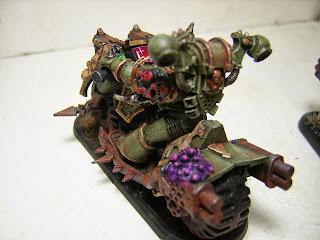 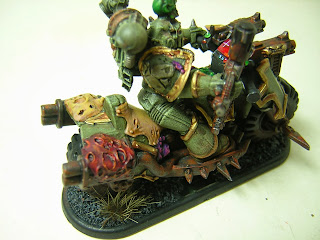 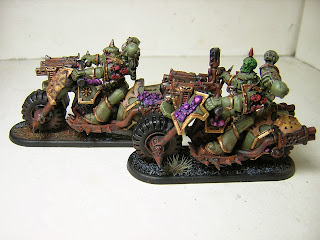 Very happy with the results. Rust, pigments, layered up corruption, they look great. I didn't assemble these, and I asked how he did the corruption bits. It's greenstuff work that was done by using instant mold on the nurgle demon prince model to make press molds. Brilliant and easy! I'll have to remember that.. 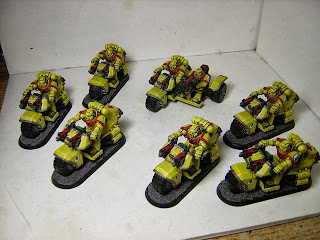 I still have a lot of other work to do..I have an Angron and FW Abadon to assemble (just assembly) and a Nurgle demon prince to convert up with a massive jump pack and paint that as well.  Busy busy busy!
Posted by Sorien at 10:21 AM No comments:

So instead of going to bed, I've been up for the last hour or so watching Star Trek videos.  Not much to post about, still banging out the commissions for now.

All I have to say is I can't wait for the U.S.S. Defiant to come out for Star Trek Attack Wing. I don't care what I have to go without to buy it.


Same goes for the Future Enterprise from All Good Things..

I still plan on playing in the Dominion War event at my FLGS and they have some really cool prizes for the first 3 events (Feregi ship, Ba'Rel class bird of prey, and Nebula Class). I doubt I'll win one, and playing the same scenario 3 times in a day does not sound like much fun but I'll give it a go.

I plan on taking a Klingon fleet.  Cloaks are just too awesome, and you know at least 1 ship will have the advance weapon system :)

There is so much awesomeness in the Star Trek universe the possibilities for the game are insane.

Very much looking forward to future waves.
Posted by Sorien at 4:02 AM No comments:

Last week was hella busy for me, with multiple job interviews, school functions and a temp job taking up most of my time. Because of that I didn't get anywhere near as much hobby done as I wanted to.

I picked up a couple more commissions, 7 more Imperial Fist bikes and some Nurgle as well.  I've been trying to get them done. Good progress on the Fists, with a lot of the layering done.

The Nurgle has been fun to paint so far, but I've spent a lot of time looking at pictures online for inspiration.

Here is the work in progress I have so far on one of the riders: 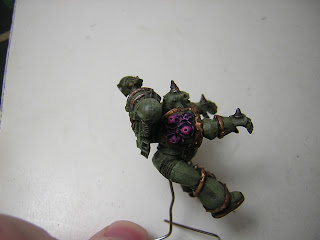 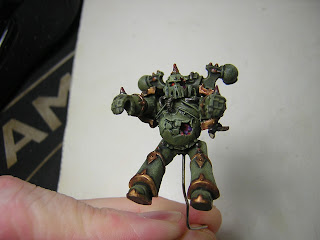 The armor is done with several GW colors..base, wash, layer, dry and I'm really liking how the shoulderpad came out.

Well this week should be all about getting this work done, baring any more outside work.

Posted by Sorien at 8:22 AM No comments:

I finished my X-1 Dakkajet (finally) after many months of sitting in a bin. I also finished my stock dakkajet with weathering and a varnish.  Both look freaking awesome.

Not much else to say. Quick pics, then off to bed for football. Go Hawks! 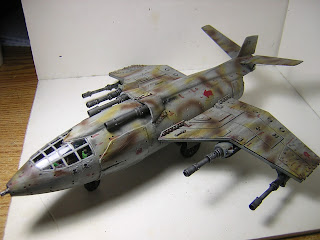 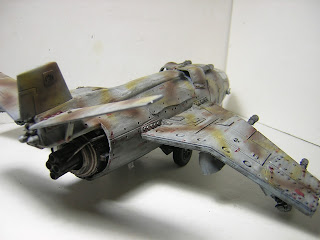 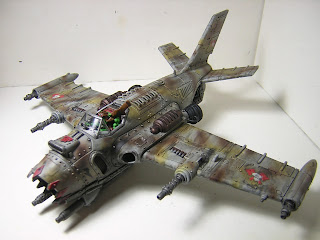 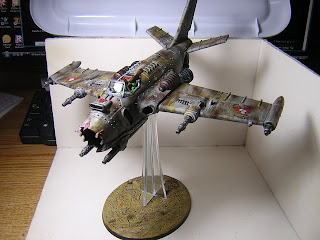 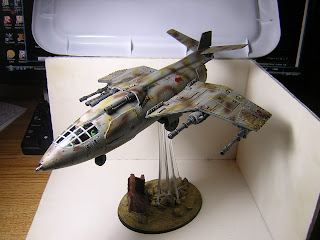 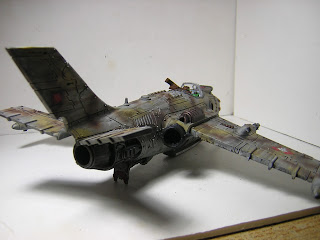 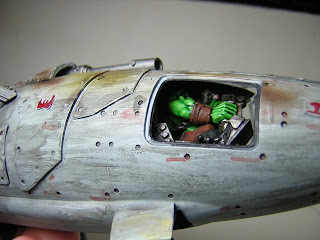 They are very close in size to each other.  The width from wingtip to wingtip is the same, and the X-1 is about an inch longer. The X-1 is also more substantial with a bigger body.  I love how they came out.

Posted by Sorien at 2:29 AM No comments:

Finished painting the Enterprise-D tonight. The color is Vallejo model color medium sea grey. I think it's perfect. I then went and did the lifeboats in yellow, engines and Bussard collectors.  Then it got a good coat of Dul-Cote for durability. It was a lot of work, it's not perfect, but I think it looks great! 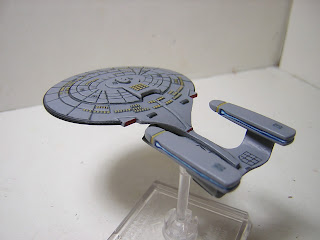 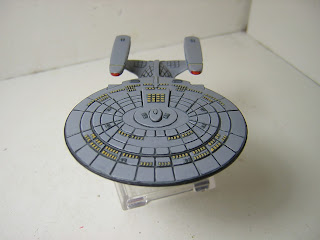 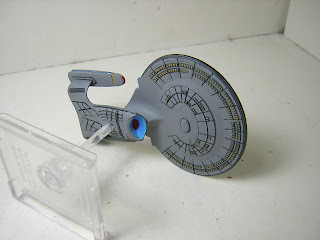 I also picked up another ship.

Time to hit the commissions.

After dropping off my daughter at her first day of 2nd grade, I grabbed the airbrush for a nice, long session. Last night I also finished the base and pilot for the Dakkajet. 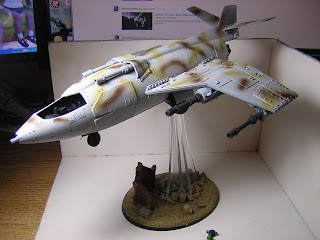 It's off to a great start. Finishing it will be quite easy.

I also got paint and primer on the ME-262 diorama project. The plane got it's base colors..but not much in the camo patter that's on the box..but I love the colors.  I then primed the Kubelwagon, primed and based the figures in Luftwaffe blue. 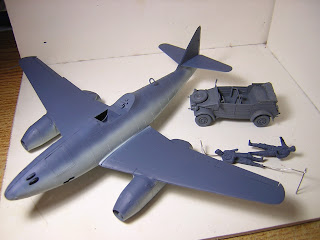 Lastly, primer on the Enterprise-D 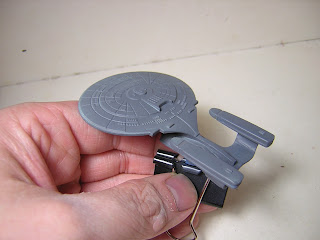 That's 3 different projects worked on today. I plan on finishing the Enterprise tonight.
Posted by Sorien at 1:12 PM No comments:

So after coming up with all these big plans for the ME-262 diorama, tonight I spent my time building a base for the X-1 Dakkajet.  I had not done one yet because I didn't have a flying base, but I did have one I was going to use on the ME-262.  Well since the 262 will be on the ground now, I reclaimed the flight stand (which came with my Valkyrie kit) for the X-1. 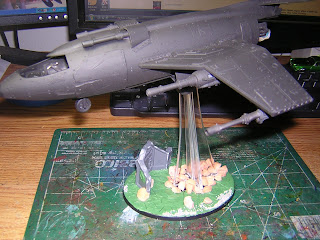 it's just a basic desert base but I added in a corroded and broken bit of Aegis. I was thinking about some IG guys (again, from the Valkyrie kit) but decided to keep it simple.

I also went though and touched up the black so it's all ready for the airbrush. I'll be starting very soon, it's my September Freebootaz model.

It will be done exactly as my other Dakkajet. I also plan on spraying the Attack Wing Enterprise-D and my Kubelwagon at the same time. Big airbrush session shortly!

After reading a lot of opinions online about color for the Enterprise, I'm sticking with grey, maybe with a hint of blue.

Posted by Sorien at 6:24 AM No comments: