The third knight of the lance commission is now done. The customer wanted it this way instead of another Hawkshrowd.

The shoulder decals were a lot of work, took many soakings with microsol to get them sitting flat. But they turned out just about perfect. 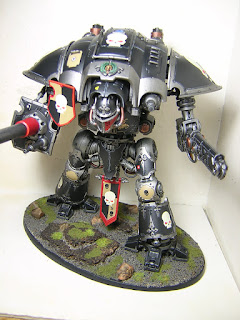 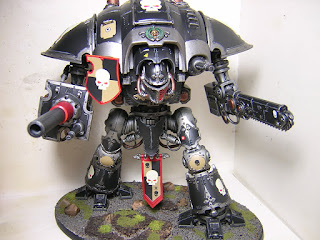 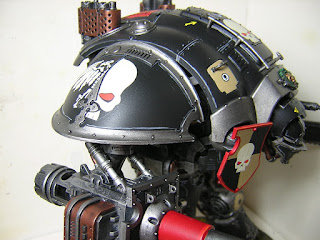 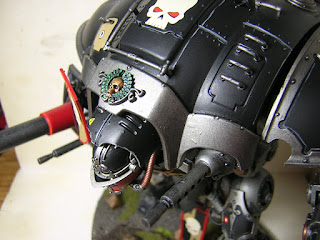 Posted by Sorien at 2:41 AM No comments:

I've had these done for a while except the final varnish, which I was finally able to pick up today. All done now! 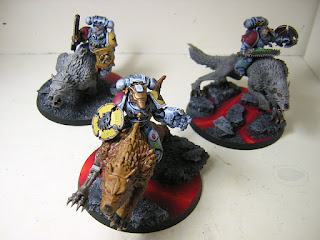 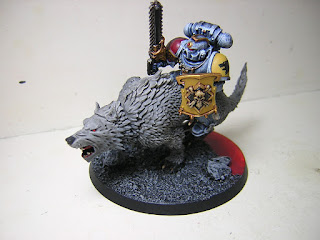 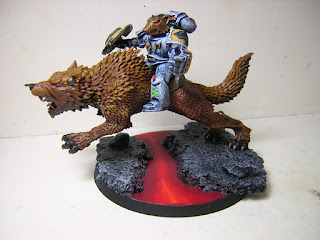 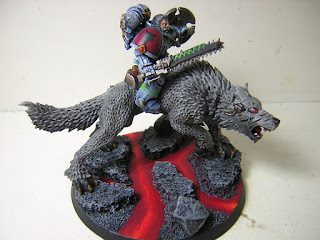 Combine these guys with Dante and the Priest on a bike for the potential of a decent deathstar.  I've also built a Librarian on a bike that could go with them as well.

Also finished up all the Space Wolf re-basing.  Not sure what's next.

After finishing up the Thunderwolf cav, I started working on the Priest.  Mid way through painting I brought home one of the new BA upgrade sprues and swapped out the head and shoulder pad. I really like the parts on the upgrade frame. 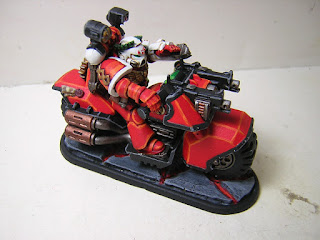 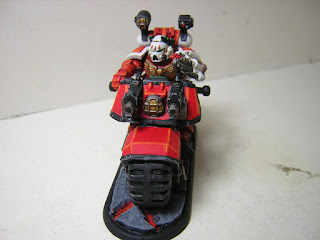 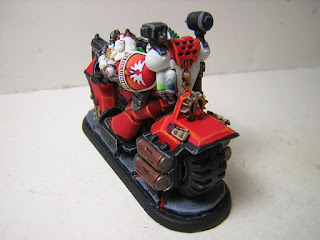 So now I have my mounted priest to go along with Dante, a Thunderwolf lord and Thunderwolf cavalry. I do need another box of Thunderwolves and a Space Wolf Flyer.

Next project is re-basing the Space Wolves. Built 11 bases tonight, for the Rune Priest and the Grey Hunters. I might re-base Dante as well.

If someone puts out decent and affordable 32mm lava bases, then I'll consider redoing the rest of the Blood Angles. But I'm not rebuilding all of the bases - I put a lot of work into them.
Posted by Sorien at 3:06 AM No comments:

I went 3-2 at the Guardian Cup and placed 17th.  Missed out on best Ork though, which made me sad. But there were 4 Ork players, which isn't bad.

Anyway today I had another 3-round 1850 tournament using the ITC rules but not the ITC missions.  It used a modified maelstrom format.

I went 2-1 and took 3rd.  Pretty happy with the results and had a lot of fun.

First, I have to say the CSM detachment continues to do very well.

Second, the boys mob does not seem to do much. They didn't do anything in last week's league game, and didn't do anything today either. In fact, in the 2nd round (a win) I completely forgot to deploy the unit at all!!  Short answer: I need more bikes!!

And last, adding in the 2nd warboss to Zhadsnark's unit really makes a huge difference. Having another model to take challenges, and just the damage output from a S10 power fist backed up by the lucky stick is hard to deny.

I hope to be typing up some battle reports over the next few days.
Posted by Sorien at 1:42 AM No comments: