The Snowshoe of Gork

Last week while I was getting my face pounded by dwarfs, I was commenting I need to make a Foot of Gork template before OFCC.

My opponent suggested I make a snowshoe, you know, cause it fits with the theme.

I was like "damn it, don't do that now I'm going to have to make it!!"  and tonight I did. Sure it wasn't my idea but it was my execution including watching videos on snowshoe stringing. The knots used are authentic!

I tried to get some square balsa wet enough to bend but I don't think I could have done that in time, so I went with plastic. I'll have to do a faux wood paint job.

I also plan on altering the spell card to say snowshoe and then set it and the template on a small stand next to my army.

This weekend is going to be awesome weather, so after Pokemon with the kids, washing and some buffing of the car I'll start my display board. It's going to be a lot simpler then I wanted, but time is short.. 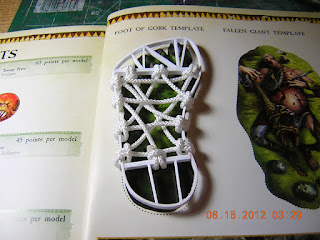