One word will soon strike fear in all players of 40k: Lootas. 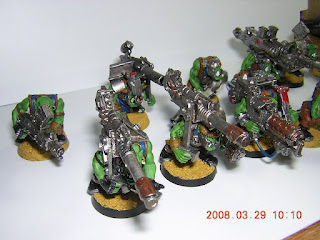 Lootas are soon to be the premier shooting unit in the game, by a large margin. They were already amazing in the 5th ed rhino-heavy meta.  But now with the new rules in 6th they will be astonishingly deadly.

Going from BS2 to BS1 isn't a big deal.  Lootas already have the volume of fire that makes up for that.  But with so many advantages gained by dropping to BS1 I can't wait for 6th now.

Snapfire: Shoot any assaulting unit at BS1, while giving up nothing.  I dare genestealers or Wolf Scouts to come at me now.  Muhahaha.
Move and shoot: (unconfirmed) Heavy weapons can move and shoot at BS1.  Wow. Moving lootas.  one game, long ago, I got to play with relentless lootas. It wasn't pretty. I could even keep them with the KFF..
Flyers: Zooming flyers hit on 6's.  With AV10. Whoopie! Dead flyers!
Glancing: 3 glancing hits? Not a problem!

The downside is that with cover mostly moving to a 5+ I'll either have to bring my own walls or use the 2nd FoC to bring additional characters with bosspoles. A mek with bosspole is 40pts, a small investment to keep the lootas on the table.

The only hard part for me is if it's worth dropping Snikrot for 15 more lootas...
Posted by Sorien at 12:55 AM