Here is a pic I just took of my last unit, the glue for the flock is still wet here: 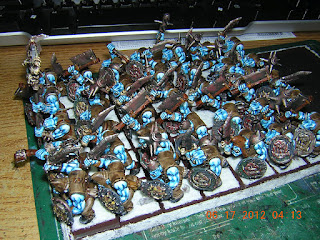 Keep in mind this is a heavily comp'ed tournament which is all about modeling and fun more then winning.  I have been told I have one of the weakest lists at the event, getting 1-2 out of a possible 6 on the power scale.  Which is fine, that means I won't be seeing any 9 Mournfang/dual cannon Ogre lists or anything like that.

I have a great idea for a quick and easy display base, plus finishing the snowshoe template. I was going to make a diorama-like display base but now I have an idea I'm going to run with that requires only a display base instead. will be much easier.

I have this Friday off so I expect everything to be done before then and I will make videos and stuff talking about my army then.

After this monumental task (as far as I'm concerned), the question is what's next?  Stay tuned...
Posted by Sorien at 4:29 AM