There is no such thing as a break - Terminator Captain WiP

Spent most of today doing  housework, then went out to my WHFB game night and got my weekly ass beating this time at the hands of Dwarfs.  How long does an Arachnarok last to a cannon? 2 turns.  Always.  I did a lot of damage to each unit (only a few guys left in each), but just could not finish anything off.  I only completely killed 1 thing the entire game..when my chariot killed off the cannon. His volley gun blew itself up. Those were the *only* victory points I had. What did I have left?  The Rock lobber, a doom diver and 4 black orcs.  460pts out of 2800.

In both of the last 2 games, my HW/Shield boys have turned out to be fairly resilient.  That stubborn with the general/bsb nearby is actually pretty good.  I need to figure out how to properly support this unit either with the chariots, NG spearmen or the spider.  I think if I can figure out how to play around that strength I'll do a lot better.

At least I'll have one of the weakest lists at OFCC so I probably won't be playing any VC, Ogres or skaven at all.

So anyway after coming home and getting some sleep I decided to work on the Captain a bit.  Finished the head, and I'm very happy with it.  It really won't take long to finish. 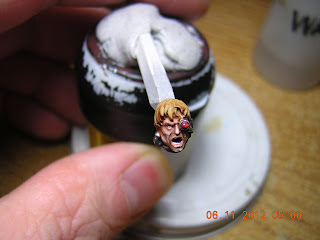 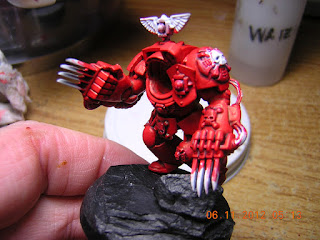