The new Ork fllyers are here..and they suck.

..and they are WAY overpriced! 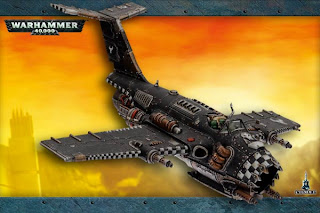 Now that the rules for the new flyers are out in the wild, I've gone over all the details trying to gleam some gold nuggets from around the crap.  The bottom line is, I'm not impressed.  Sure it is a completely bad-ass model, and with 3 variants you're going to have a ton of cool bits left over, but as a unit in the game they aren't what I've been waiting fore.

To be sure, they may have been designed with 6th in mind, and there may be something in the new rules that make them more survivable.  Like generic versions of Ariel Assault and Supersonic replacing the codex rules in DE/Necrons. This will give these guys what they need without making the current line of fast skimmers unkillable (Such as Eldar grav-tanks and vendettas).

The best part is they are all fast attack! Considering how much complete suck there is in the fast attack in the codex, it makes these seem almost playable.

Easily the coolest thing here though is the Waggh!Plane rule.  Giving vehicles a benefit of your Waggh! is a great idea I had not even thought of myself!

By far the best choice is the Dakkajet. At a 110pts (more then 3 rokkit buggies) you get 6 TL STR6 shots at 30"  It also benefits from +1 BS against certain targets. Upgrades include 3 more shots and making it BS3!  yes, being able to shoot 9 STR6 shots TL at BS4 against rhinos and chimeras?  That is some seriously impressive firepower, for sure.  Not to mention mowing down infantry and denying FNP against DE.  For 135pts completely kitted out it's a big investment but, again, taking up fast attack means they won't be competing with anything important.  It needs to be about 30pts cheaper in 5th edition.

I can see 1 or 2 of these complementing a mech ork list, say with 9 killa kans and a battlewagon or two.  This way there is much more pressing targets then the planes allowing them a turn or two of being able to shoot.

Will one make it into my dual-denial shooty list? Maybe.  I'm not sure what I would cut at 1750pts, but at 2k I might take one.  It would almost always start in reserve (except in Dawn of war) and hope it comes on at the same time as Ghazzy so I can "blow my wad" all at once..

The other two versions are more expensive and just..horrible!  The burna-bomber has a few shots that ignore cover..but they are all AP4...sigh..really?  With the bane of Orks being Purifiers they couldn't just give us some decent AP3?  Or any AP3 for that matter? I would EASILY sacrifice 150pts to wipe out a unit of purifiers with a large blast AP3 that ignores cover.

The blasta-bomber is worse. It has a chance to kamikaze itself for a S9 Ap2 hit on something. That scatters. whoopie!  They should have just gone ahead and made it a sacrifice. You come on, move 36", blow yourself up on a target point with a S9 AP2 large blast (twin-linked because it has a pilot) for 80pts and call it a day.


Reading between the lines.

What really intrigues me though is looking at the rules for these and trying to evaluate what might make the next Ork Codex.  The most glaring thing that stands out to me is the willingness to break the "BS2" Ork USR.   This gives me hope that units will get re-evaluated for higher BS in the future. Even though most people support moving Lootas to heavy support, I never have as Heavy are already a hotly-contested slots.  But say, if the moved to heavy AND were made BS3 then that makes for a much more interesting set of choices.

I could even see them making shooty units WS3 BS3 (like shootaboys) while keeping combat units WS4 BS2.  Makes for more variety, and along with it hard choices.  Right now, shootas are a no-brainer over sluggas.  Something like this change would really heat up the debate between the two.

Next thing is the waagh!Plane rule which as I said, having waggh! effect vehicles is a great idea. I can see this being expanded to other vehicles in the next codex.  Something like during the waggh! all vehicles get an extra d6 movement for free but always count as moving through dangerous terrain.  or something else interesting and useful, yet orky.

I'm really disappointed.  There are so many really cool things that they could have done. Like make one bomber version carry stormboys like in apoc.  Or, as said before, give us some AP3.  Will I buy one? heck ya!  Especially since I get 20% off at my FLGS, so it will only be $36.

STOP making such awesome models!  TAKE MY MONEY GW!
Posted by Sorien at 5:53 AM