I've been working on my one big must-do project and that is getting my unit of Savage Orcs (and Savage Orc Warboss) painted.  The stumbling block has been the color. I didn't want the same blue I used on the rest of my army, but wanted a kinda hybrid Blue-Green to show the (relatively) recent addition of the savages to the Clan of Gork's Snowshoe.

I mixed a lot of colors, many times. What I did find is that no matter the ratio, the greens would always dominate the blues, like the green pigments are always much more powerful.  It was really frustrating.

So I had abandoned the idea and decided to jump into painting them starting with Sotek Green.  It's very close to the old Hawk Turquoise. I then washed using my favorite Coelia Greenshade and then layer up with Sotek Green, then highlight twice with mixes of Sotek Green and Space Wolves Grey.

This got them painted but left me wholly unsatisfied with the result. Then I decided to try something completely out of the blue: I washed the first models with Thrakka Green.  This *almost* gave me the result I wanted.  Almost.  Next day I hopped on down to the game store and picked up the Waywatcher Green glaze.  This worked great, getting me very close to the vision I had in my head.

First time I had really used a glaze, but the learning curve is pretty short. 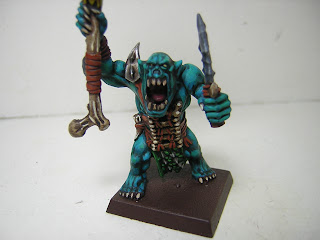 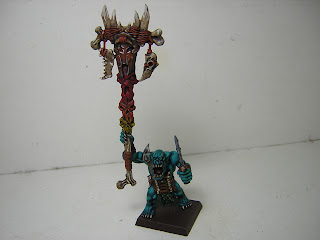 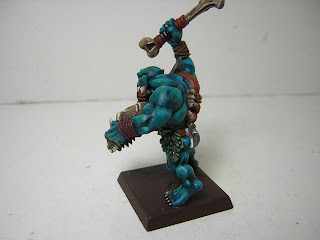 Still need to do the warpaint.  The other issue with these guys is now simply tedious they are to paint. Bone, leather, stone and skin.  Browns and beige oh my.  I was able to speed up the process by going to a drybrush on all the bone parts.

Another part of that is getting in more color.  Reds really add to the look of the unit, but it's hard. There is some lizard skins on some of the models so doing red and green skins helps a lot.  I also painted the standard as they show on the GW website, with a transition from red to yellow.

That's about it for now.  I need to finish assembly on Farsight, then get him going.  Plus I'm getting the scratch building itch again, who knows what will come of that...
Posted by Sorien at 3:19 PM