Despite Tau coming out tomorrow, I still have it in my head to build a small Chaos Space Marine ally force.  I was thinking about a unit of noise marines for the blastmaster, but due to the rules in the CSM book I would still have to have a troop choice.  But it would allow me to take a Helldrake.  A pink helldrake would look pretty bad-ass IMO.

Anyway the ideas are still going through my head and I wanted to try a color scheme.  Went through all the pink paints at my FLGS and finally settled on Vallejo Game Color Sunset Red and GW Emperor's Children.

The armor is based in sunset red, then washed heavily in Baal Red wash (Yes I still have a lot of it) and then layered with sunset red and emp's children.

This is both a test and potential ally HQ but I didn't put anywhere near as much work into it as I did the last one.  Not much blending, just layers.  It's overall an OK paintjob. I could have blended the armor and cloak but just didn't feel like it :)

He was definitely much easier to paint the second time around. The first time I spent a lot of looking trying to figure out what was what on the model.

I almost went with yellow for the sword and plasma, but thought it would be too much of a spot color. 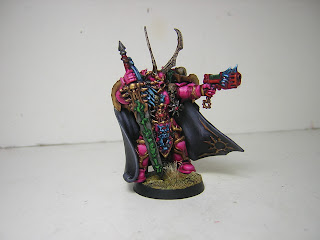 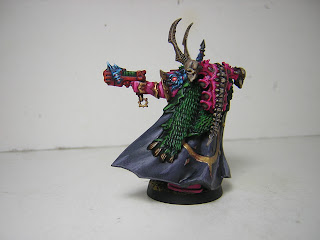 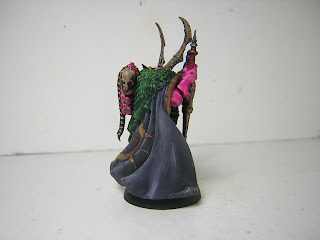 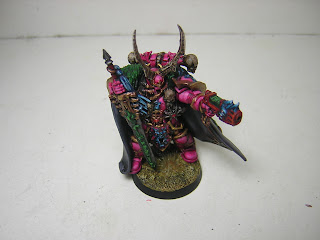