I've been kinda under the weather emotionally so I've not been posting much. Plus I spent a lot of time painting Imperial Fist bikes so didn't have much time for my own stuff.

There is a tournament this weekend where I'm on a waiting list, not sure if I'll get to play or not. I didn't have the money to pre-register so I'll have to live with it one way or the other.

I'm working on re-basing my broadsides. The 60mm bases are actually a big advantage against blast markers so it's kinda important.

Nothing fancy, so it won't take long. 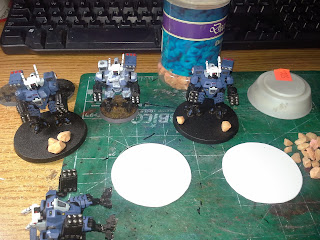 They still are no where near as big as the new broadsides, but if anyone has a problem with that..tough shit.

I also broke out some Blood Angels to use as red Ultramarines. Heh. Painting up a combi-plasma for a tactical Sergent.
Posted by Sorien at 10:02 PM