Finished the 5 Grey Hunters I've been working on lately. I used a base of The Fang which gave me much more dramatic differences between the shadows and highlights I missed on the Rune Priest (which used a base of Space Wolves Grey).

I've decided to make each Grey Hunter's right shoulderpad different instead of trying to make each squad different. That way I don't have to worry about what models go where. The colors for the shoulders came strait from the Space Wolf codex.

The basing is the same as my Tau army as the Space Wolf detachment is mainly designed to be an ally for them. Unlike my Blood Angels I'm doing chipped paint and pigments to make these guys much more battle worn. 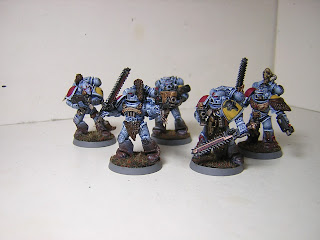 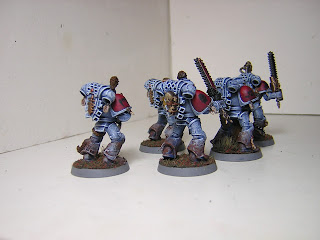 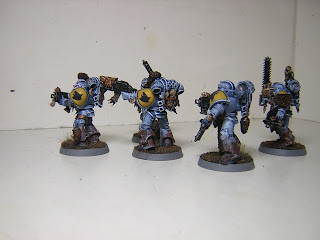 I'm extremely happy with the way these guys are coming out, especially since they are really the first guys I've painted fully assembled, so I learned quite a bit.

Again, this was done mostly with drybrushing on the armor, gold and fur.  It's quick enough yet looks more then good enough for me.
Posted by Sorien at 11:45 PM