I broke down and spent real money on the Farsight ebook instead of waiting for the hardback copy in  October.

I bought the Kindle version for my Samsung Galaxy, as I'd rather play with Flashgitz then buy an Apple product.  I was looking through The Eight and found a strange entry that didn't match up with other leaks I'd seen. 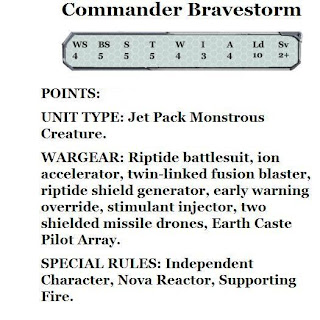 Now what is odd is that the stats match up to a commander in Iridium armor..which is what the ibook version has (over at places like 3++ they have images).  Same points, but the Kindle (.mobi format) has him in a Riptide with XV8-02 stats.

Video up soon on my thoughts of the Enclave.  Hint: It makes Tau even more broken.
Posted by Sorien at 9:28 PM