Working on my jet battlewagon tonight. I finished all the bits for it, so just need to do the main body.

Also might need some way to break up the red a little more. Thinking some decals. Not sure yet. 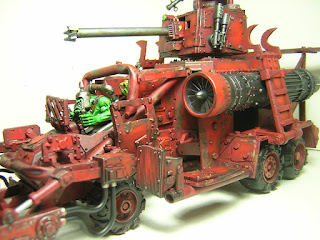 I put it all together for this pic, and suddenly thought this thing is so awesome it needs it's own rules!

Ludicrous speed!
The JetWagon is so fast as to be just a blur on the battlefield, frequently flying through the air instead of keeping the wheels on the ground!
-Any turn the JetWagon moves more then 6" in the movement phase, it must move flat-out in the shooting phase.
-If the JetWagon makes a flat-out move, it must move 18", and must do so in a strait line. In addition, when moving flat out it gains the Jink special rule.
-If the JetWagon fails a dangerous terrain test when moving flat out, it does not stop. Instead it finishes it's move and then is destroyed, but rolls on the ramshackle table to resolve the destruction.
-If a flat-out move moves the JetWagon off the table, it is allowed to leave and enters ongoing reserve.
-If moving flat-out, the JetWagon moves over enemy and friendly models as if it was a skimmer.
-If moving flat out, in the following movement phase the JetWagon is allowed a single turn of up to 90 degrees and then must move 12", but may attempt an emergency stop!

Emergency stop!
Roll a d6, on a 4+ the emergency stop! fails, the JetWagon takes a hull point in damage and follows the rules for Ludicrous speed!  On a 1-3, the JetWagon can act normally, ie move up to 6" and passengers may disembark and assault, etc.

May take one of each of the following:
Armor plates +10pts
Grot Riggers +5pts
Red paint job +5pts
Reinforced Ram +5pts
Posted by Sorien at 4:39 AM