Brief 40k OFCC afterthoughts and the last game of 5th edition, ever..

I had a good time at OFCC this year.   I ended up 4-1 and the team ended up dead middle. 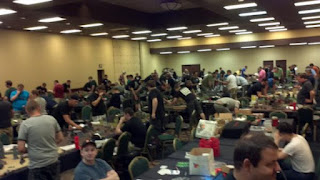 Just some quick notes on how my list worked and some observations.

1. Every game but 1 I put the 10-man assault squad in the stormraven. I never put the SG in it, though I think I should have.
2. An empty rhino is incredibly useful. I used it for mobile cover, for blocking transport advancement, as a unit to score points in the opponent's deployment zone and (baring a failed terrain test) for last second objective contesting.
3. Empty rhinos are ignored.  Completely.
4. Dante is awesome. I love hit and run.
5. I still hate attack bikes.  They only miss when it really matters.  They are good for bullet magnets.
6. Blood Angels are fast. Really fast. I was able to get around the board so fast every time. Against MC heavy 'nids I was able to move and shoot over and over, stay far enough away and then go in for the kill at the end.  I was able to drop in one side, kill a threat, then jump/flat out my way across the board with little effort.
7. I got lucky several times.  From Dante making 7 invulnerable saves against fists to getting a single hit on a trygon prime with the libby and killing it with the force weapon.   Better lucky then good!
8. I rarely had the tools I needed to deal with something.  Twice I had to face a 40+ marines, and I just don't have the bodies to deal with that. If not for luck (see #7) I should have lost 2 of those games.
9. It is possible to make a really, really bad GK list. I've seen it.

This was the largest OFCC ever, and the largest even put on by Ordo Fanaticus.  Both of these will probably be broken next year.

My very last game of 5th ever will always give me a sad face. First, I made a couple of key mistakes, but even with that I was starting to crawl my way back into the game.  Then the dice really took a dump on me. Even though at the end of the game I still had the chance to fight for a tie, but the dice thought otherwise.  In the last turn I hit with the multi-melta on the SR, only to roll 1&2 for armor pen.  Then later that turn I lost a combat by 2, only needing a 7 and roll boxcars. Sigh.

Even as we were cleaning up I was starting to think about next year, both OFCC and my planned trip to the bay area open.  But that's a discussion for another post..
Posted by Sorien at 1:56 PM