Saturday May 7th, I got a few hours off. Off life, off reality, off from everything. I didn't intend it to be that way, but it worked out for me.

Real life is sucking big right now, mainly due to cars and money. well cars sucking money. I'm sure everyone knows what I mean.

Saturday my cousin was going into my FLGS to buy and futz with new Tomb Kings stuff. He has a substantial army already but needed new toys. I got to get away from the family and hang out with him. It was awesome.

First, I brought my vampire counts and went through and fixed all the broken models I had and made a few bases of fillers for my skellies and crypt ghouls.

After that I played my cousin's Deathwing in a game vs Blood Angels. It was a fun game, I can really see the appeal of Deathwing...it is a LOT of fun to play. This is the list I ran @1750:

Mission was roll dice and tie with dawn of war. He placed scouts on his objective and I placed the dual-lc unit on my objective in opposite corners. I then dropped the non-command squad next to his objective and turbo-boosted the speeders there as well. The idea was to bait in his LRC full of assault termies, priest and libby to kill off my deathwing sqaud leaving them open to MM the LR and vindicator the squad.

He took the bait, but I made so many saves the combat lasted 3 turns before the last guy died. I did end up killing the land raider though. Then the command squad didn't show up until turn 4, but was able to wipe out his termies. I was about to assault the scouts when the game ended on a roll of 1 at the end of 5. 1 good turn of shooting took out almost everything I had (including a sniper scout improbably exploding a speeder).

In the end I only had 1 immobilized speeder and 5 termies left. My objective was contested and I was out of range of his, giving him the win. It was a great game that went back and fourth from turn to turn with dice luck playing a huge factor!

After the game I sat down and started assembling my second stormraven. My biggest decision is to paint the interior or not. I have not fully glued it together yet for that reason. But it was great sitting there without any kids bugging me to play barbies or mario party 8 and just talking warhammer and sniffing plastic glue..

I would like a 4th 40k army sometime. I am waiting patiently for Tau - which could be even before the end of the year - before I decide. I am considering deathwing and the henchmen-heavy Coteaz hybrid list posted earlier.

Anyway long post with a wall of text. I finished assembling my XV-9 with phased ion guns and will probably be painting that over the next week for the Freebootaz challenge. I love these models, so easy to pose! 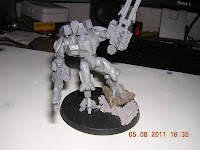 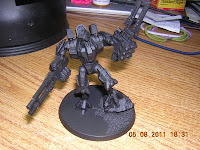