The Orks don't have a lot of units that can take advantage of Tactical Reserves, however we do have Da Jump. 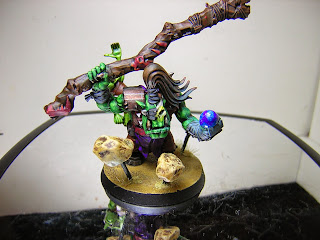 First, what is Da Jump? It's a psychic power in the Ork index for 8th edition.   You pick up any infantry unit and then place it anywhere on the board more than 9" away from any enemy models.

So let's start with the long list of why it's so damn good.

-Wierdboys are only 62pts, hardly an expensive tax to get anywhere you need too.
-Sure it has a casting cost of 7, but with the bonus you get to casting with nearby Orks, it's pretty much guaranteed (along with d3 mortal wounds - but that's a small price to pay).
-Since you can hide in the back, you won't have to worry about being within 24" for a deny the witch roll.  Even if you are in range, you're likely going to get over 12 anyway making a deny impossible.
-Unlike tactical reserves, you can do it more than once.  Meaning bringing 3-4 units of 30 boys means mobs of boys where ever you need them, when you need them.  Nothing like dropping 20 grots on that key objective at the end of the game.  Eldar have nothing on Da Jump shenanigans!
-Meganobz are infantry.  wink wink.
-Jumping shootaboyz means lot of shots. You can shoot rokkets at one unit, shootas at 1 (or more) other units and charge yet a 3rd!
-Sure you are 9" away but with Orks getting the charge off after Da Jump is very likely.  Not only do you have a re-roll from 'ere we go, but you can use a command point to re-roll just one of the dice if you need to instead.  Roll a 1 and 2? 'ere we go. Rolle a 6 and a 1? Command point!  Way better than 50/50 odds.  With most units just locking them up in combat and preventing shooting for a turn will mean the rest of the army (or another unit jumping in) has a better change of making it into combat.
-Blocking.  Did you know you don't have to bunch up a unit in a circle? As long as every model is 9" away from any enemy. That means with a unit of 30 boys you can encircle an enemy army so they can't move out!  Sure "fly" models will ignore this so against some things it won't be good.  So you sacrifice a 180pts of boys to do it.  Again, that will mean an army worth of shooting at the bait, not the force.
-You can combine a fast-moving force (stormboys/bikes) with Da Jump for a flanking operation.  60 stormboys moving up and 30 shootas on the flank will result in devastating charges.
-YOU CAN JUMP OUT OF COMBAT.  There is no restrictions on Da Jump as far as units being engage or within 1" of an enemy model.  That means you can leave combat without falling back, shoot and re-charge.

Essentially there is no downside to Da Jump at all. It gives tactical flexibility, infinite movement, and plays into the Orks strength as an assault army.  Sacrificing a unit of boys isn't that expensive and will give the rest of the army time to move into position for massive amounts of assault goodness.

It's my opinion that relying on running up the board alone isn't good enough. Combining a horde (under a kff) and Da Jump gives you all the elements for a solid army.