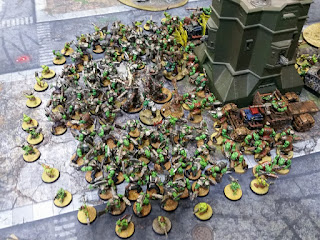 it's quite the adjustment to not have to worry about templates!

So I went full buff list: Ghazzy, warpath weirdboy, waagh! banner nob.  It was astonishing easy to get 6 attacks per boy hitting on 2+!!!  Also having STR4 base is HUGE.  And the nobs become STR10 with their power fists resulting in S10 just from them - that means wounding T5 on 2+.

The new wound chart also takes some time to get use too.  As does pistols in close combat - I never once shot my sluggas.

The second wierdboy with Da Jump puts quite a spin on the horde aspect of it as well.  Sending 30 shootas across the board first turn is amazing and forces your opponent to deal with them as the super buff group moves forward.  I did forget I could try and charge with them though lol.

Ghazzy himself is still a beast in CC, getting S12 and with T8 makes wounding him almost always on 5+

The lack of the 'eavy armor upgrade is a huge hit.  Boys just don't have any survivability and if someone concentrates on them they will die in droves.

So a combination of Boys and buffs is the way to go. An unsupported horde won't make it very far.

I have more ideas..I will be trying basically random lists for a while until I find something I really like.