I made some changes to my Tau list, dropping the Ghostkeels.  They were a lot of points for not a lot of damage.  Especially now where there is no first turn deep strikes in my face they are not as needed. 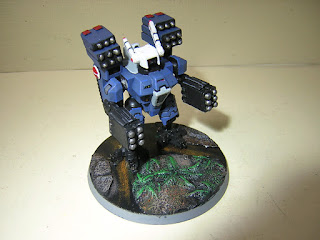 The key to the whole thing is Broadsides with missile pods.  They are just incredible, the amount of damage output is insane - with 16 shots EACH.  With the extra 6" of range from the Sept ability, they are almost unstoppable.   Equip with an ATS and the missiles are now -2 ap, with the S7 and d3 damage.

Smart missiles are great as well getting that -1ap, I almost always end up shooting the two types at different targets.

I then surround them with a ton of drones to keep them alive and so far it's worked very well.

I'm not sure yet about the stealth suits, but time will tell.  The main purpose of them is gone with big faq update, but not sure what I can replace them with.  I always manta strike the markers to come in turn one, to keep them alive.  the others on the tidewall keeps them safe if no one shoots at it, and the other targets are much more of a threat (broadsides, riptide).

The changes to the battalion helped a lot in the last game, allowing me to double nova and heal the Riptide.

The XV9 dropping in does a lot of damage with it's 16 shots at an extra -1ap. Give it just 1 markertlight hit and it's in good shape.  I think I need to adjust the weapons on the drop commander, not sure yet. He needs to do more than 1 damage per shot.

I've been having a lot of fun playing this list.  It's really a point the broadsides at something and delete it.  The 2 drop suits provide more than enough distraction though, as does the Riptide. Maybe someday someone will learn and focus down the broadsides, or at least try (go go savior protocols!).