Last week I came back from a seized initiative against another 3-0 Tau player to go undefeated and secure first place in the month's league play! 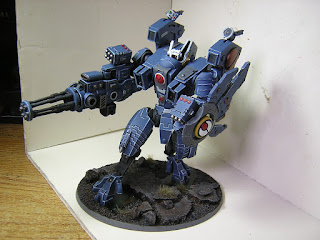 After seeing what he was doing I decided to make a few tweaks on my list, mainly giving my drop commander more firepower.  I ended up dropping a Stealth suit to make room.


I realized the plasma on the drop commander allowed me to stay far back, but didn't do any damage. So I went with the more traditional fusion blasters, along with the relic plasma.    Same with the plasma on warlord buff commander. I decided to try out a missile pod for a bit of range.

I had 9pts left over, so added a couple systems to the stealth suits - a fusion with a velocity tracker should be fun.
Posted by Sorien at 3:46 PM