So I'm playing in a tournament this weekend, that was set up a long time ago as 7th.  However we have the option to play 8th - which all my games have been.

Anyway I wrote out a 7th edition list and then slightly modified it for 8th.  In 7th it was ok, but in 8th it's doing pretty well.  I'm sure that has a lot to do with 8th though. 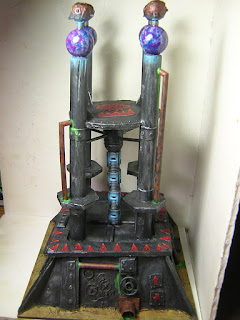 Again, this was built primarily from the 7th ed models I was bringing with me.

However this list just has a BRUTAL amount of shooting.  Smasha guns are just fantastic at taking down any big model, KMKs can really pile on the damage and lootas handle just about everything else.  the key though, by far, is the VSG itself.  It provides a level of protection unlike anything else we can field.  Combined with the FNP from mad doc, the lootas stick around quite a while.

It took me a while to decide to NOT take Da Jump with this list. Pretty much jumping the unit of 30 boys would mean leaving the gunline completely unprotected.   The Waggh! banner nob though was totally worth it, helping every single game.

The trukks are not really working out though, they just are not as fast as they use to be and the 8th disembark means they are even slower.  I think the answer is to replace them both with Kommandos.  That gives me quite a bit more distraction than those trukks. It also means re-arranging the detachments so I can fit them in.  Dropping the koptas will also give me more kommandos.  Remember, free burnas!
Posted by Sorien at 9:35 PM