Pretty much since the start of 8th I've been running lootas in a battlewagon (aka "loota-wagon) with the reading of the rules for the battlewagon that the passengers don't suffer the move and shoot penalty. I confirmed with Reece from Frontline gaming asking several times on Twitch.

However today the first 8th edition FAQ dropped and that does not work.  It's been "nerfed".  Yay!  Orks are VERY squishy and giving the lootas decent protection (since terrain is meaningless) really made a huge difference.  Repairing the wagon also helped with that.  It was very, very good.

So now the question is..what is the alternative? How can we keep the lootas alive to do their job?  Well really the only answer is a Void Shield Generator. Basically the same points as a battlewagon + deffrolla, it gives anything within 12" a 4++ from shots outside the 12".  This goes down as the building take damage though. The obvious difference is that it is static, and even moving by foot is a lot slower than in a battlewagon.

Of course you can just keep the loota-wagon and if you have to move then just suck up the -1.  It wasn't an issue before with things like going to ground behind an aegis, so why is it a big deal now?  Because it was good, but not so good as to be OP. It gave Orks that long-range mobile firepower so many other armies take for granted.  It was new and different and effective. 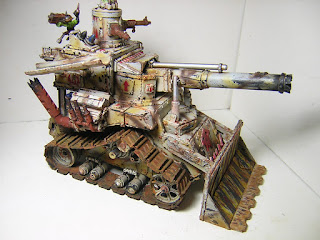 Another alternative is to pump out more Kill Tanks.  It's actually fewer points than a battlewagon full of lootas. In fact I can almost take TWO for what I was paying for the loota-wagon!  And hell, you can still put lootas in them if you want lol! Did I forget to mention taking 3 gives you +3 command points?!?!

Anyway I think going forward the Kill Tank (and mabye the big trakk) will become the go-to tanks for the Ork player in competitive play.  It's just so darn cheap for what you get.

So that's where we are at. Less than a month into 8th and Orks have already been hit with the nerfbat.  Color me not surprised.
Posted by Sorien at 9:57 PM