So when I go to tournaments I usually don't do full reports because I'd rather just play and concentrate on the game then worry about filming. So I'll just give you a brief overview of what went down on Saturday at Glimpses of Wonder and Warfare.

Game 1 vs Tau: The Scouring 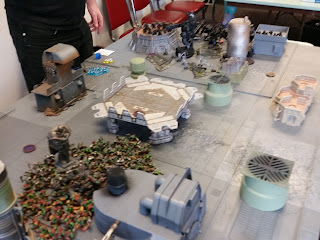 He had 2 stormsurges and 3 hammerheads..and not much else.  We rolled and the 4pt objective was on my side and I went first.  I jumped 30 shootas to the area on the right, killed a unit of Firewarriors for first blood and shooting and assault took down the first stormsurge by 7 wounds and a couple wounds on Longstrike.  Not too bad. He wiped out the shoota boys quite easily and put a couple wounds on the tanks.  Next turn I just poured the firepower and knocked down the stormsurge some more.  He then moved up a bit and used what he could to do damage to another unit of boys. That small unit then jumped and assaulted some pathfinders.  I jumped the last unit and killed stormsurge and assaulted the 2nd.  Near the end Zhadsnark moved up and tried to finish the last 4 wounds on the stormsurge but he made all his invul saves.  I held the 4pt, and he had 3 objectives for a 5-7 minor loss.  I didn't have much left on the board! 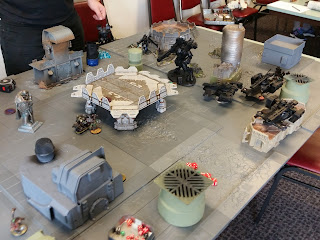 Game 2 vs Salamanders, No mercy. 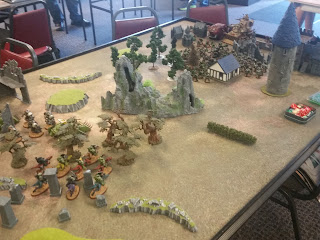 Varied marine list.  Couple libbies, 4 melta in a drop pod (I surrounded the tanks), bike command squad and chaplain, a couple razorbacks, and lascannons, but the most deadly thing there was 4 Centurions with Heavy Bolters and Hurricane Bolters - OH MY!  They had to die.  First turn I jumped the shoota boys, killed one in shooting..and then failed the charge!  That unit didn't last long. Next turn I jumped another unit took out the apothecary and librarian.  It took a couple turns to finish off the centurions, and zhadsnark mowed through the command squad despite the storm shields (a turn of complete whiff with thunderhammers helped).  Again, not much left at the end. 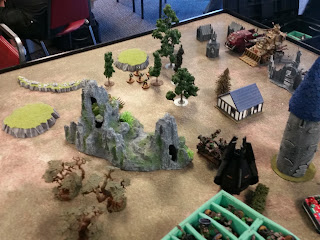 With first blood and warlord I scored a 120-45 major victory.

Game 3 vs demons, secure and control. 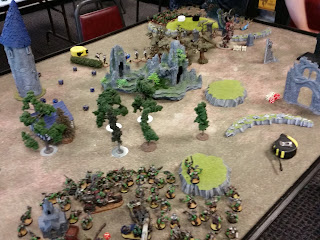 He had a ton of seekers of slannesh, brimstones, 15 thousand sons terminators and Magnus. I ended up with first turn yet again!  I jumped the shootas over and tried for first blood on the brimstones to no effect.  I also took 2 wounds of magnus after some re-rolling 1's and a command point for another save.  I should have gone for the seekers. But the seekers spent half the game doing nothing but killing boys so that was quite nice. He then dropped all the terminator and flew magnus right in my face, wiping out most of a unit of boys in shooting but opted to charge mostly another unit so there wasn't much damage in combat.  I then jumped the remaining big unit out of combat to assault the smaller unit of termies, locking them up until they died in turn 5.  The other bigger unit stayed locked in for most of the game.  Zhadnark did a TON of damage to the termies all by himself.  Magnus was able to kill off most of my characters but I kept hounding him getting him down to 2 wounds at the end of the game.  It ended on turn 5 or I probably would have killed magnus and taken my objective from the 3 remaining termies. 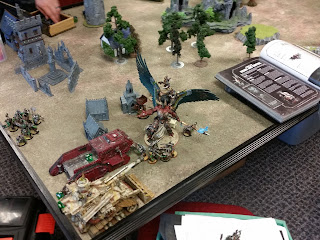 Yep 1-2 that day, and with a bit of better play it probably would have been 1-1-1.  My biggest errors were not attacking magus with the deffrolla! Totally forgot to attack with my tanks at all while he was locking them in combat. GRRR!! Even the Kill tank is pretty bad ass in combat and can do mortal wounds on the charge!

Despite losing most of my army every game none of them felt like I never stood a change. They were all excellent games and could have gone my way with a bit better play and/or remembering my rules.
Posted by Sorien at 6:26 PM