What happens when rules drastically changes how you field your models?  A great example is the new index and Boyz vs Warbikes.
Warbikes were, IMO, unequivocally the best unit in the 7th edition codex.  Especially when combined with Zhadsnark. 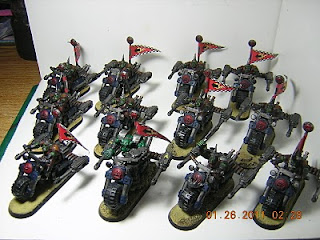 So what made the bikes so good?
-had slugga/choppa for 3 attacks each
-3 TL S5 shots per bike
-+1 to cover save when turbo-boosting.
-4+ armor save included
-Fast!  24" per turn move + more if Zhadsnark around.
-Just 18pts per model!
-the T and save made them far less susceptible to mob rule.
And where did boyz suffer in 8th?
﻿
-Slow
-Suffered greatly at the hands of mob rule
-not very resilient
-were not able to kill everything.
Then the index hit, turning the situation completely around.
Bikes:
-increased 50% in points
-Lost a LOT of their speed, from 24" to 14+d6"
-No "exhaust cloud" at all, which has been a stable fluffy rule for decades!

Mainly, though, it was the dramatic increase in cost.  There wasn't even really anything in the edition change that made bikes so much worse..just the points increase.

What did boyz gain?
-Mob rule.  The best morale mitigation in the game outside of "fearless".  Who doesn't want a LD30 unit of models?
-Attack buffs, both number and to-hit.
-Being able to be jumped across the board.


What it comes down to is while the points didn't change for the boyz, the difference between the two became much greater.  Resulting in boyz just being a much more important staple than before.
Posted by Sorien at 12:08 PM