Ya it's been a few days since I posted, but I basically spent the whole time painting. Finished with hours to spare, including all the layers, pigments and basing.  Sometimes I impress even myself :) 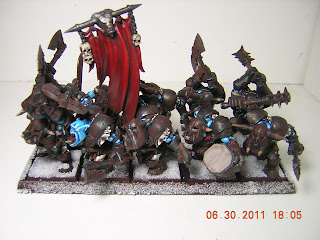 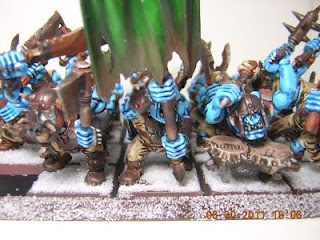 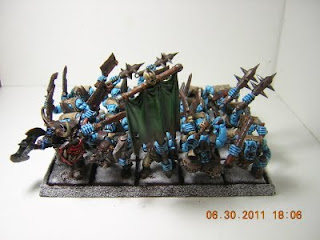 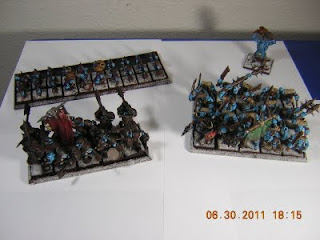 Here's the strange thing. I'm not burnt out. At all. Not even a little.  I have spent pretty much every spare second for an entire month with a brush in my hands. Not doing some hobby stuff seems..well strange.  Like I should be doing something when I'm not.

So after finishing what I would call an epic achievement (considering I have a full time job and 2 kids), taking pictures and video, editing, encoding and then uploading to youtube what do I do? Take a break of a couple hours then start right back in it. I started by cleaning up the pile of crap from the contest.  I first clipped all the bits off the sprues and bagged them, then I opened and built the 3 goblin fanatics I had on the pile.  I also had 3 black orcs from a trade a while back I had built, so I based them to rank up with the guys I have.  Didn't take long of course, but I still kept going..

Tonight I'm short a kid (spending the weekend with gramma) so I was able to do a few things around the house I've put off but even those didn't take long.  So I finished off the big shootas and skorcha for the warbuggy.  After that I sat down and read the O&G book, trying to decide on army composition.  I want to run Grimgor...he sound freaking bad-ass.

What's next? Mainly waiting for contest results. I figure it will be a couple weeks before voting even starts on the SMA contest, so will probably be a couple months before I know the results of that. My apoc game got postponed but I'm still going to paint the stompa.  It will give me more ideas on what I need for my jet battlewagon.  I do have some re-basing to do with my Blood Angels for OFCC, and I still need to do my Hawk Lords mini for MAC.

I plan on finally doing my talking about orks videos for dark eldar and grey knights, now that I have a bit more experience against them.

Instead of the apoc game, I'll be going to another tournament on the 30th.  I'll be taking the same list as last time.  It works well, and I've got a lot of practice in with it.  I see no need to change.

I am thinking about diving into redoing my stormboys, and getting a finecast zagstruck.  I think I could make a viable variation on my meta-denial list with them.I also need to touch up a few 'ard boys plus replace the 3 big shootas I have in there for some unknown reason. That's easy though.

I still have a lot of O&G new in package.  I need to be working on those in and among other project to get them done by next June.

Sorry for the wall of text ramble, but I had a lot on my mind.
Posted by Sorien at 4:44 AM