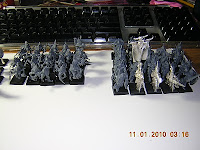 Long weekend. Not only did I do a bunch of Halloween stuff, but I put together a 2ooopt Vampire Counts list and assembled 65 infantry for it. Phew. A lot of it was done during football games, but still a lot of work. Only 31 models and 2 blisters of Bat swarms left!

So here is the list I came up with. Any comments welcome.

Vampire (165)
Powers: Hunter in the Dark
Items: Armor of night, enchanted shield, Talisman of the Lynci

I am considering giving the lord Forbidden lore instead of hatred, so I can have better options for spellcasting.

Also, which is better swarms or dire wolves?

The idea is to have the grave guard the hammer unit, with the skellies in support. The Lord will stay in range to use the helm and nehek the guard to keep them alive, raising zombies to deny flank charges if needed. Then the swarms and wraiths will be out tarpitting stuff while the scouting vamp raises zombies in the opponent's front yard..just for fun.
Posted by Sorien at 3:24 AM