Finished the 2nd half of the first Dark Angels tactical squad tonight.  The extra DV sergeant is there so I can run two units of 5 if I wish. 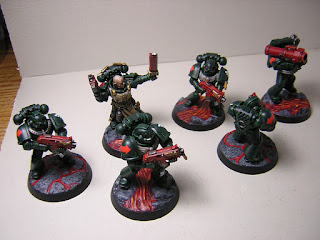 Did some different paint on the lava for these guys, and probably won't do it again.

I also finished the conversion of my DV Ravenwing bikes 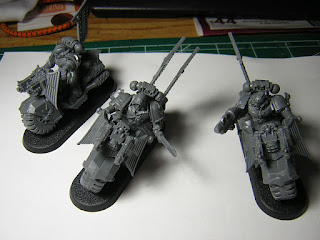 The first thing was just like before adding a magnetized weapon option instead of just the plamsa. I have plasma, melta, and grav for it.  I then cut the arm off the sergeant and moved it, then added magnetized power sword/chainsword.  I also gave him the hooded head from the Dark Angels upgrade sprue.  Finally cut off the bolt pistol from the 3rd guy and gave him a standard biker arm.  Really like how that came out. Subtle conversions are the best conversions!

I also built a Ghostkeel while my son was playing Pokemon.

Next up is finishing a scale model, then deciding what to paint next. Probably the DV characters.
Posted by Sorien at 1:55 AM