Orruks going to a tournament!

The first post-general's handbook Age of Sigmar tournament is happening tomorrow at my FLGS.

Most of the last week I've spent finishing off the display board.  The snowshoe middle was done and I had to just to everything else.   It took way longer and was much more work then it should have been, mostly from dealing with the foam board warping from the PVA. 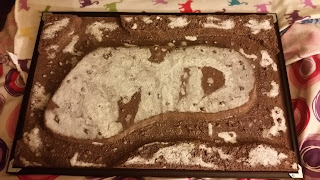 Just recycled the frame from my 40k Ork board.

I'm very much limited to the models I have. If I do expand the army I would love to add some Ogres to the list for some better punch in battleline units.

Anyway this is what I'm bringing:

I don't expect to win any games, as the models are woefully under powered compared to other armies.  The whole scene is very new, especially around here. It's almost like a new game in fact..there is no meta yet.