First I have to say the tournament was a bit of a letdown. There was suppose to be a big wind storm blow through Portland today but it was mostly a dud and it looks like that kept people away. Only 6 out of the 26 that signed up showed up.

We went ahead and played anyway, and it was still totally worth it.

Not to mention how happy I was with the way my army looked! 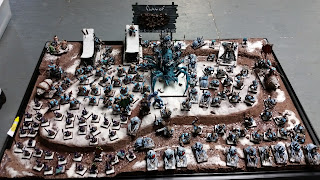 A glotkin, plague drones, some Knights, and other misc gribblies. 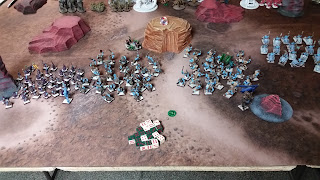 The game was to hold objectives one in each deployment zone.  I ran up as Orcs are suppose to do and just got wiped out. However he couldn't get to my objective earning only a minor victory.

Vampire on dragon and lots of crypt ghouls that come in on turn 1.

This was quite a bit of a different mission with earning points for objectives. having many units helped out and despite losing most of my army again I still ended up with a major victory simply by outscoring on the mission.

BTW crypt ghouls are very hard to kill.  But don't do a lot either... 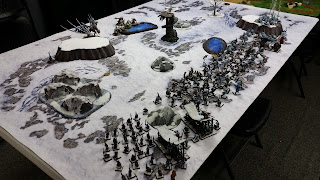 Lots of Elves shooting and a dragon.  So. many. bows.

Another one objective each.  I lost almost all my army with just the doom divers, grots and shaman left.  I did quite a bit more damage though this time mainly with the doom divers able to take out the general on dragon.  He made one mistake leaving his objective, and the game came down to a hawk rider vs my shaman..but he couldn't kill him giving me another major victory. 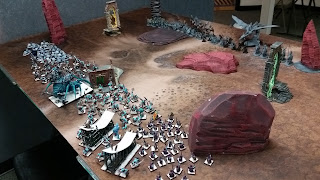 There was another destruction player, playing Ironjaws with about 15 Gore Gruntas and a Maw Crusha. It looked AWESOME on the table, for sure. But He went 1-2 to me 2-1 netting me the Destruction award. 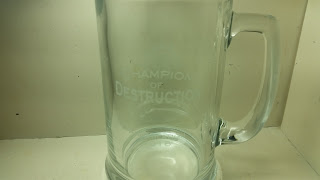 So I learned A LOT today.

What worked:
1. Goblin netters. Holy crap these are awesome. it's amazing how much a -1 to hit really hurts. I am thinking about how to keep some near every combat, it seems to be the way to go.
2. Boys with shields (kinda).  The boys units with shields were quite a bit more survivable then the unit with 2 choppas.  They just simply get a re-roll in close combat (not shooting though, which they need) and made them fairly hard to kill. Using the Great Waggh! banner gave them the same re-roll 1's that the 2x choppa guys had so I don't see any reason to take 2x choppa guys in the future.  The -1 rend on such basic models is also pretty good.
3. Spider Riders. Still an awesome unit.  I ran them into things that they should have avoided but with Inspiring Presence and Bellowing Tyrant they are quite remarkable ..if used correctly. I was super aggressive and of course have no idea what I'm facing but careful use of these guys is well worth it. They are quite spendy at 80pts per 5 but worth it.
4. Doom Divers. Having more then one is the key, and they are basically twin-linked and when they do hit they do a lot of damage.
5. Destruction abilities.  Another holy crap moment.  Giving units a D6 move in the hero phase plus their normal movement is amazing.  Not only for longer threat range but to re-arrange everything if needed prior to moving.  I took bellowing Tyrant which gives one unit +1 to hit..and it's amazing.
6. Grots.  The massive unit of grots were just so fantastic, so many models that they take forever to chew through and with the netters they don't take anywhere near as much damage as you would think.

What didn't work:
1. boys.  SOOO fragile. And then you combine battle shock losses on top of it and once someone starts concentrating on them, the units just melt away.  They need to be immune to battleshock above 10 models. They also don't hit very hard unless they have buffs on them.
2. Big things. Orruk big things have almost no save so they don't last long.  And they are seriously expensive.


Going forward:
If I spend any effort on this army for future AoS tournaments, I will need to replace the basic boys with something better for the battleline requirements.  I think Ogres are the way to go there.  Also leadbelchers could add some better firepower. Something to consider.
Posted by Sorien at 9:07 PM