From zero to Goff in nothing flat...

A little while ago I didn't have any "official" Goff units in my army. I count my Tin Bitz colored meganobz and Goff but they aren't black.  That all changed when I decided after much debate to paint my last Trukk Goff.  I really liked how it came out. I've avoided Goffs before because all black can get really boring. But mixing clans helps solve that.


While putting away my Trukk into the "these units suck" box, I dug through it and looked a full unit of 30 boys I had muckin' about at the bottom.  They needed refurbishing.  I needed some Goff boys to go with their shiny new Trukk.  So away I went with a full refurbish painting the cloth black, stripes white and a layer/highlight on the skin. 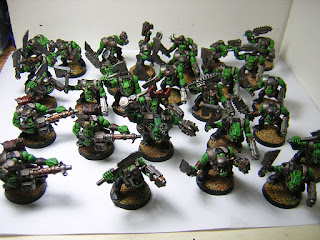 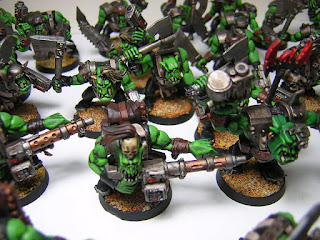 Now the boys are back in the bottom of the box, but if I ever decide to play trukks they might see the light of the game table.

But that's not the end of it.  I got a small bonus at work (in Amazon gift cards) and after much more indecision went with an Ork flyer. Sure I have 3 Dakkajets but I've been wanting to fly Wingnutz' Air Armada for a while now...so I needed bombers.

And here is the result: A Goff Burna-bomber. First time using pigments to "dirty" up the windows, and I think they came out pretty good. I also used pigments in the panel lines to bring them out instead of highlighting the edges of everything. I love how the bombs came out, but I broke my airbrush after finishing them. 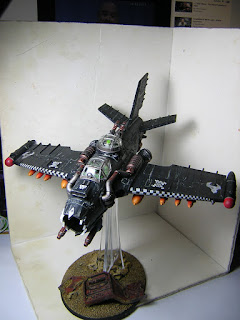 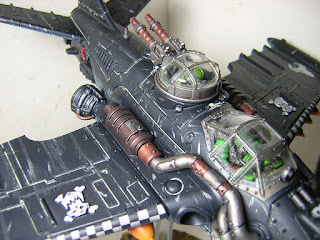 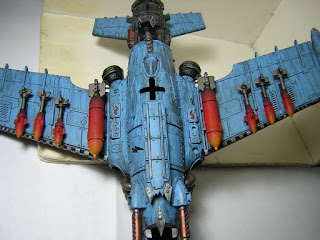 Ran out of the blue I used on the underside of my other planes, so I might go back over it someday, somehow.

So now in a short couple of weeks I've gone from zero Goff models in my Army to about 500pts.  When I do get the last plane for the Blitza-bomber, I'll have a whole new chance to be indecisive on clan!!
Posted by Sorien at 4:31 AM