Happily I picked up my first commission this week, 3 of the characters from Dark Vengeance which may eventually turn into the whole thing. Working on the chaplain. I'm liking the cloak and tabbard, and there isn't much armor so that won't take long at all. Just have to do the weapons, gold and smoke. 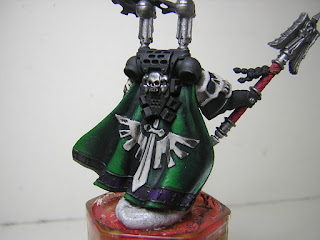 I also built a Chaos Rhino for Toys for Tots.  Since it's Iron Warriors it really won't take long (yay black tanks!).  Not doing the inside, but I have the rear door magnetized to hold the havoc launcher and dozer blade just like last year's Chimera. 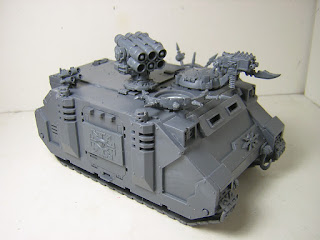 I also have all the chaos models from DV for myself. They are to the point of mostly primed, but ran out of primer (see Rhino above LOL).   I plan on doing the Chosen as nurgle-themed, eventually running them as proxies for plague marines as allies.