Finished the howda and then decided to pin it to the spider. Turns out I made a mistake in assembly so I had to make some modifications to the spider.  Nothing that will ever be seen though so no biggie. I plan on mostly airbrushing the spider, which I can't always do, so I started on the base. lots of detail but nothing I have not done many times before. Won't take long to finish, then I will have all weekend to paint the spider. Might actually make it by the end of the month after all. 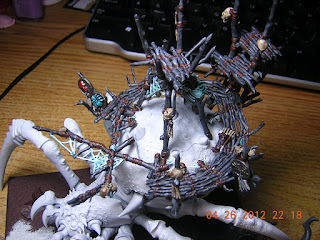 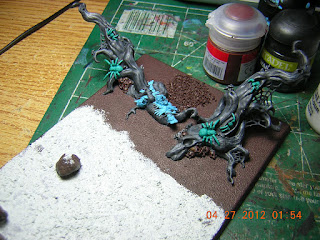 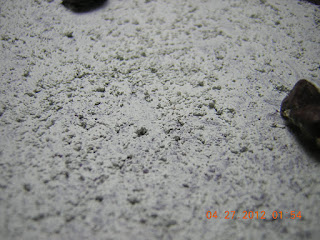 I'm completely ecstatic for Coelia Greenshade. It is a nice blue-green wash from the new shade line. before I had to mix my own blue-green wash from Thrakka green and Asurmen blue.  The blue has so much stronger pigments then the green that getting it right was a pain.  New shade color, no more mixing. thanks gw!

I also mixed the base ice color, which is 1:3 liche purple and scaly green (yes I know they dropped scaly green years ago, so I used a Vallejo equivalent) which makes the most amazing deep blue color.  Hopefully one of the new paints will be close enough where I don't have to mix that either.  I'll be checking out Sotek green and Thunderhawk blue to see if either of those will work. Not mixing, especially when airbrushing, will make me do the happy dance.

Lastly picked up Mourn Mountain Snow to try it on the basing for the O&G.   I like how it turns out, a lot.  It has a very slight blue tint.  Before I used a combination of flock layers and the white sand to get the look I wanted. Now I plan on just doing a layer of mourn followed by a quick flock. Time saver!!!

So anyway I need to make an update video.  Maybe tomorrow.
Posted by Sorien at 3:03 AM